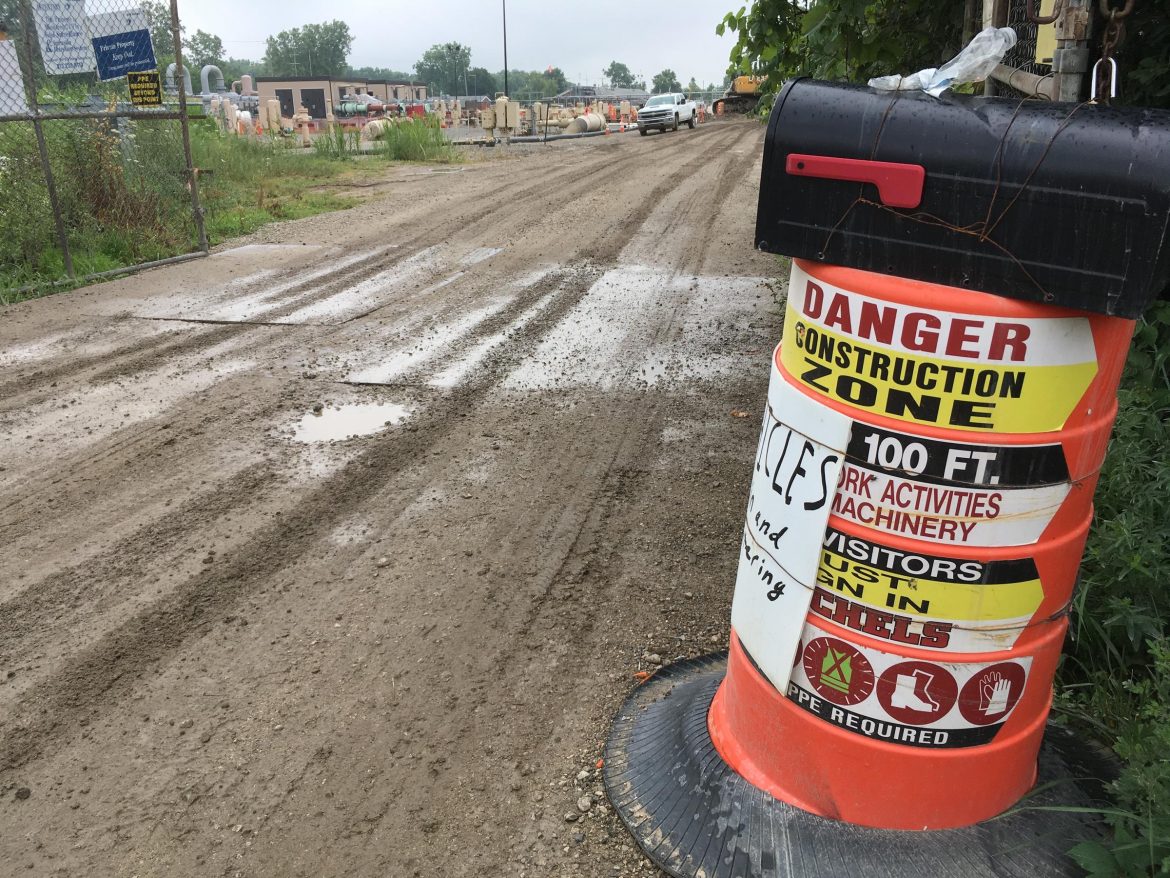 By David Fair and Barbara Lucas

This story originally appeared on WEMU’s The Green Room and is republished here with permission.

Why do some people feel oil and gas pipelines are a good and necessary part of our lives, while others fight against them?  To tackle this question, first we need to understand the basics:  We all know what a pipeline is.  But what they carry, where they are, and why there are so many, are questions most of us aren’t so sure about.  In this first part of a series on energy pipelines, Barbara Lucas gives us a bit of “Pipelines 101,” in “The Green Room.”

David Fair (DF): Dakota Access and Keystone out west, the ‘Line 5’ pipeline in the Straits of Mackinac and, in Washtenaw County, the Rover and Nexus lines.  All across the country people are protesting pipelines.  In a special Green Room series, Barbara Lucas will explore the various perspectives on pipelines.  Are they symbols of an extractive energy system that’s unsustainable, or a crucial component of a healthy economy?  In this first installment, we narrow our focus to explore the question “why are there so many pipelines?”Construction sounds.

Barbara Lucas (BL):  We hear a lot about oil and gas pipelines.  But being underground, we don’t often see them. I did manage to catch DTE’s “Nexus” pipeline being buried, on the east side of Ypsilanti.  It was impressive:  Huge machines lowered the 3-foot diameter pipe into a long trench 3 feet underground.  When completed, Nexus will run for 255 miles.  And apparently, there’re a lot more like this under our feet already.

David Halteman: So this is the pipeline map.

Halteman:  This depicts both crude oil natural gas and proposed natural gas lines. Now this proposed one is the Rover pipeline coming down through Washtenaw County on the west side of through Dexter township all the way down through Freedom Township.

BL:  It’s Halteman’s job to keep us safe should a pipeline leak, or the fuel catch on fire.  He needs to know the pipeline routes and what they carry.

Halteman: On the map here you can see they are color-coded. We have red for the crude oil product and blue for natural gas.

BL:  The lines crisscross the county and state like a web.  In Michigan there’s currently around 126,000 miles of pipelines: distribution lines that connect to homes and businesses, and big transmission lines that go from state to state and Canada.  Those interstate lines transport a confusing assortment of different products, mostly in gas form.  Primarily natural gas, but occasionally other gases such as hydrogen gas and landfill gas.  Michigan also has thousands of miles of pipelines that transport energy products in liquid form, including crude oil and refined petroleum products such as gasoline, diesel and jet fuel.

BL:  And it’s not just pipelines that are all over.  There’re about 40 compressor stations.  They keep the gas pressurized, to move it along its route.  Like the one I stopped by on East Michigan Avenue in Ypsilanti. And wells—in Southeast Michigan alone nearly 800 oil or gas wells have been drilled.   Such as this one, pumping away in a farmfield in Saline.

And underground storage.  Michigan has 53 depleted gas or oil fields now being used to hold natural gas, more than any other state.   Looking at the map, I realize that a house I lived in for two decades sits right next to one of them.  All this infrastructure in our midst is owned by a dizzying array of different companies.  For instance, the six different pipelines in Freedom Township are owned by Enbridge, Amoco, Marathon, Wolverine, Panhandle, and Consumers Energy.  And the web of infrastructure is growing.  Five more pipeline projects are currently being built in Michigan. And we’re not alone.  In the U.S., since 2005 there’s been a 71% growth of natural gas production.  DTE pipeline expert Steve Hohf says that’s because coal-fired power plants’ days are numbered.

Steve Hohf: The electric generation sector, a number of utilities pretty much throughout the Midwest and throughout the country for that matter, are facing an aging coal-fired generation fleet many of which are 50 to 60-years old and are much less efficient and much more costly to operate than newer technologies, primarily renewables and natural gas.

BL: DTE’s proposal to build a new natural gas plant in East China Township is part of this transition away from coal. Hohf says not only are new pipelines needed to carry more gas, but to address a change in where the gas is coming from.

Hohf: We are quickly sourcing more of our natural gas supplies from the Appalachian region and less from areas like the Gulf coast and the western portion of the U.S.

BL:  He says that’s because the Appalachian supply—fracked gas coming from Pennsylvania, Ohio, and West Virginia—is new, and very productive.  The western sources are old, and supply less.

Hohf: The other very important aspect of this is cost.  In the Appalachian basin the gas can be produced at about 50% of the cost that we had been facing from other supply areas.

BL:  Michigan Environmental Council’s Kate Madigan serves as Director of the Michigan Climate Action Network.  She says new extraction technologies have spurred not only natural gas, but oil production too.

Kate Madigan:  The tar sands oil in Alberta, is not easy to extract.  It’s really thick you know, peanut butter-like consistency, and so it’s only been in recent history that it’s been profitable to extract it. So once the technology was figured out to be able to do that, that’s why we’ve been seeing this coming to market.

BL:  Mike Shriberg is Great Lakes Regional Executive Director for the National Wildlife Federation, and a member of the Michigan Pipeline Safety Advisory Board.  We meet at a coffee shop near his office in downtown Ann Arbor.

Mike Shriberg:  The constraint right now is not getting it out of the ground, it’s moving it to where it needs to be. The problem is once you’ve got this product moving it has to have a place to go. And so it can be self-feeding in that way. There’s got to be a way to move the product, it really can’t sit because you have that backup.

BL:  In fact, to relieve pressure, to prevent a leak or explosion, gas may be released, or vented, at the pipeline or compressor station.  Or burned off—that’s called flaring.

Hohf: And we saw that a little bit in the Appalachian region prior to the Rover project coming online earlier this year, and it still exists to some degree because there’s a number of producers that are awaiting additional infrastructure to be able to move their product to a market.

BL:  Surprisingly, it’s not so much from our energy usage that profit is made.  Here’s DTE spokesperson Pete Ternes.

Hohf: All we charge customers for gas is the same price that we pay for gas. So it’s a direct pass through.

BL:  Apparently, more of the profit is in the new construction.  Here’s Mike Shriberg.

Shriberg: They get—and it varies—10, 20% margins or something like that.  So that’s where their big money comes in, is in those infrastructure investments.  You know there was a time, the system was set up because you wanted utilities to invest in infrastructure, otherwise…  you wanted to make sure that we had enough electricity for the grid and all these pieces.

Ryan Duffy: Thirty percent of the crude oil on line 5 goes to Detroit area refineries. So that’s used for cars and for jet fuel and all those kind of things, and then there’s the 6,000 other products made from what’s supplied off of the lines as well. There’s a huge list. I mean you’d be surprised—it’s perfume and prescription drugs, it’s all kinds of car parts, all of those things to take vacations up to northern Michigan that we use.  So kayaks and fishing poles and all those kind of things.

BL:  It’s not just that so many consumer goods contain gas or oil-derived ingredients.  It’s that our factories are usually powered by fossil fuels.  So regardless of whether it’s made of plastic or corn or even ground-up recyclables—fossil fuels have been burned to manufacture and transport it.  In fact, on average, 60% of our carbon footprint comes from the food and consumer products we buy.  So is the web of interstate transmission pipelines that feed the American way of life a good thing or a bad thing?  And who decides if we need more of them?  Here’s DTE’s Steve Hohf.

Hohf: The federal government through the Federal Energy Regulatory Commission has the authority to approve or disapprove of applications to construct natural gas pipelines.

BL:  And the same goes for oil pipeline proposals.  It’s the feds that have the say.  Not local governments and individual landowners.  In fact, if a court decides the pipeline will serve the public good, it legally can “take” the needed land, through eminent domain.   But when it comes to pipelines, what actually IS the public good?  That is a hotly-debated question, to be explored in the next part of our series on pipelines.

David Fair:  Join us in upcoming months for more of our “Green Room” series on pipelines.  The Green Room is heard on the last Friday of each month and you’d find our archive of shows at wemu.org.  I’m David Fair and this is 89.1 WEMU FM and WEMU H-D-1 Ypsilanti.

Oil and gas wells in Michigan

Tip of the Mitt Watershed Council—Pipelines in Michigan

Non-commercial, fact based reporting is made possible by your financial support.  Make your donation to WEMU today to keep your community NPR station thriving.

One thought on “The Green Room: Pipelines – Part One”