This story originally appeared in the MichiganTrailMaps.com newsletter and is republished here with permission.

The only people we saw while hiking the Mason Tract Pathway, located in Michigan’s Crawford County, weren’t on the trail but in the water. Two miles into the hike, the pathway descended to the edge of the South Branch of the AuSable River and in the middle of this blue-ribbon trout stream was a pair of fly fishermen.

For a few min 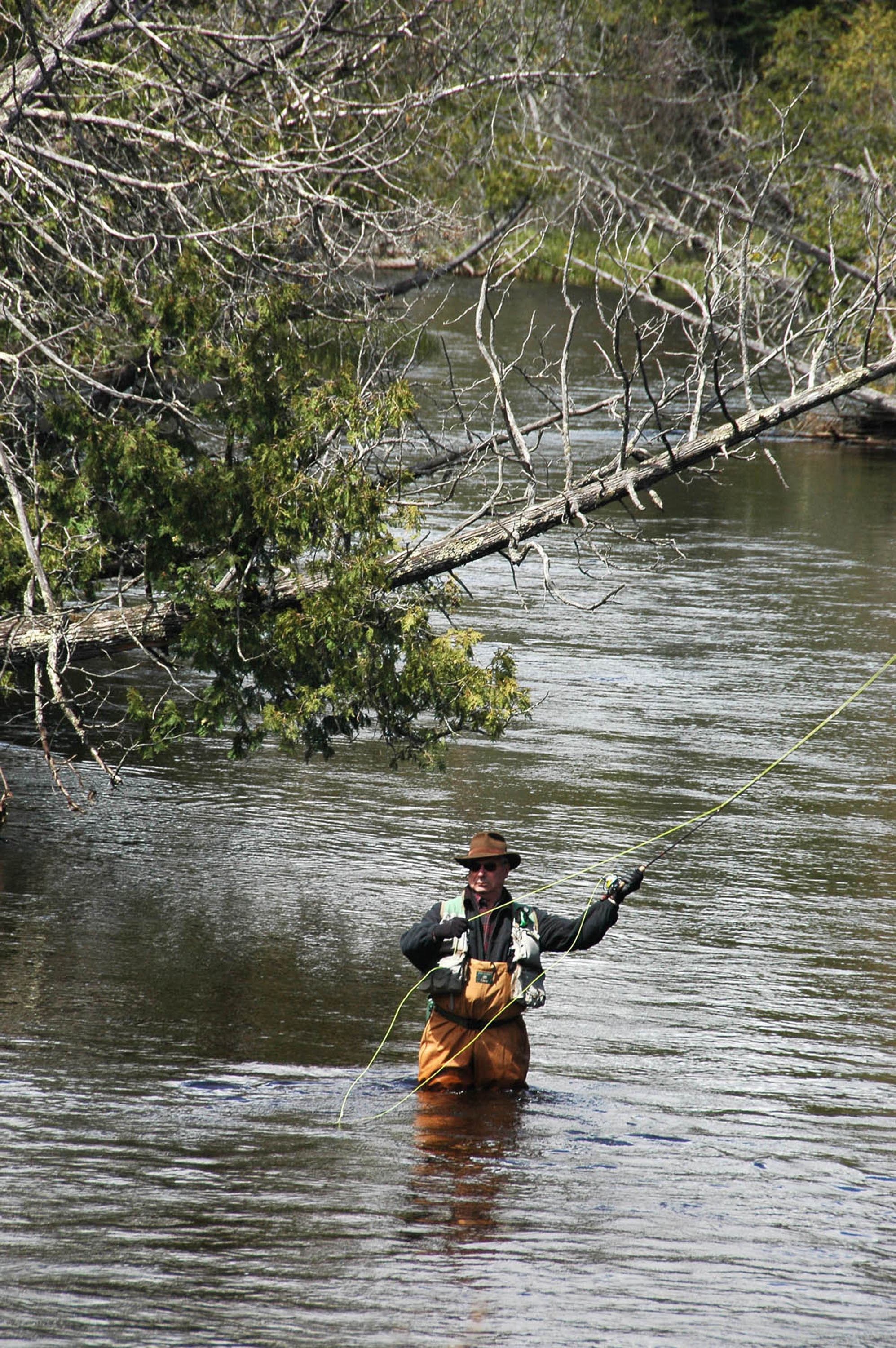 utes we quietly watched them cast dry flies into the ripples of the river and then everybody moved on, anglers and hikers alike. Within the fabled Mason Tract, an undeveloped area of 2,860 acres that is split in half by the South Branch, they had trout to catch and we had another 7 miles to walk.

Since the early 1900s the South Branch has been a playground for millionaire anglers. That includes adventure novelist James Oliver Curwood who had a lodge here and used the river as the setting for his book  “Green Timbers.” In 1921, Clifford Durant of the Durant Motor Car purchased the area and built a 42-room mansion on the banks of the South Branch.

In the 1930s, George Mason, another auto magnate, obtained the land from Durant. Mason was an avid fly fisherman and the South Branch became his private retreat from the pressures of Detroit.

He loved his river so much that in 1954 he bequeathed it to the state of Michigan, opening up this once exclusive wilderness to anybody who cherishes the Northwoods . . . whether they are a millionaire or not. 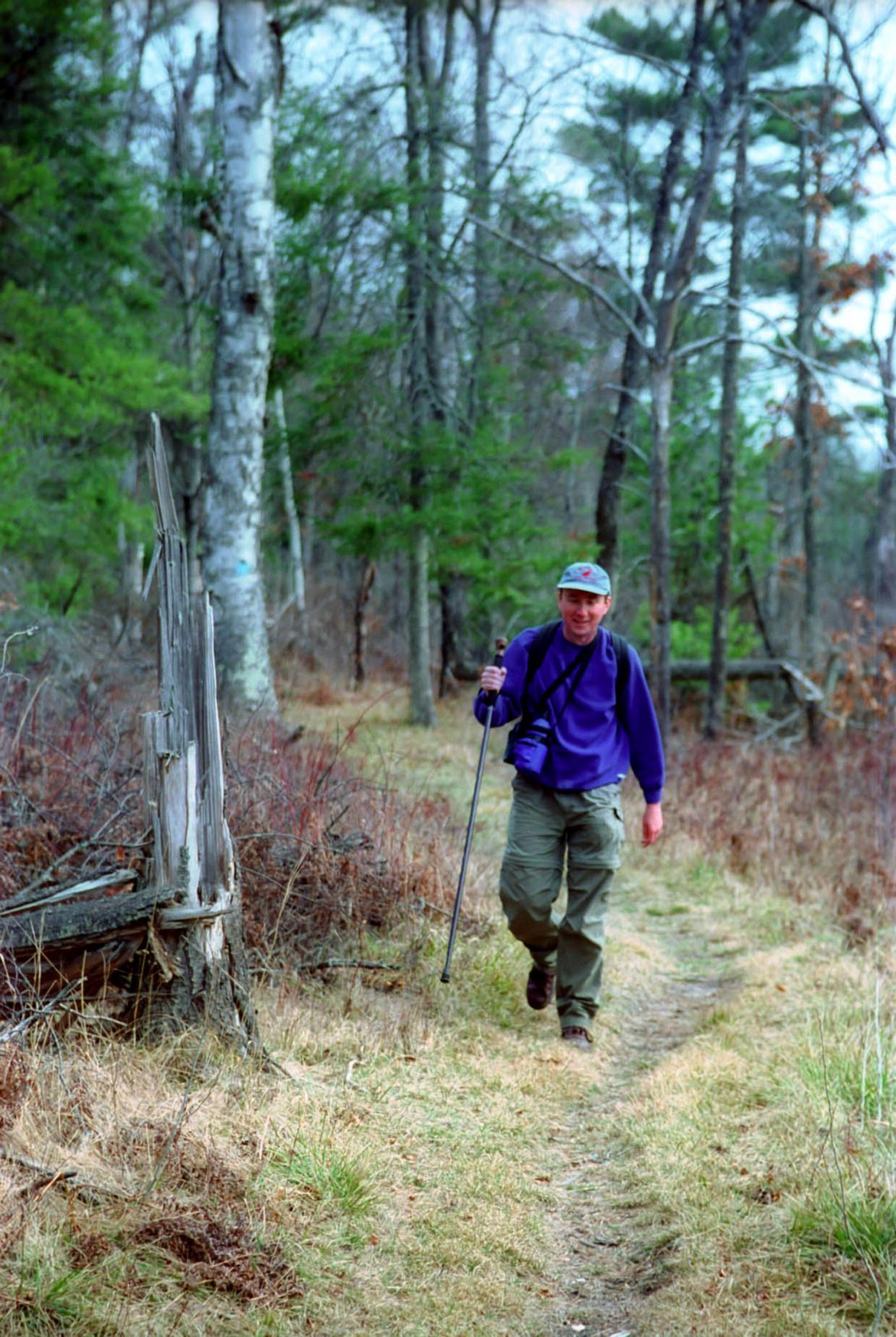 A hiker on the Mason Tract Pathway.

There was a time in the 1990s, when the Mason Tract Pathway was poorly marked and a challenge at times to follow. But over the years it has been extensively upgraded, thanks to Boy Scouts, trout fishermen and DNR staff who rebuilt bridges, replaced benches, added new signage at junctions and stabilized the delicate shoreline bluffs with stairways and fences.

Now the only thing that keeps the numbers of hikers low on the Mason Tract is the fact that it’s a point-to-point trail.

The pathway stretches from M-72, 15 miles east of Grayling, to Chase River Bridge northeast of Roscommon. That leaves you 9.5 miles from where you left your car.

“In that respect it’s not an easy trail to walk because you need to arrange two vehicles,” said my hiking partner Mike Ugorowski said. “But it’s worth it.”

We began at the M-72 trailhead and in a mile had passed through Canoe Harbor State Forest Campground and were looking at the South Branch for the first time. 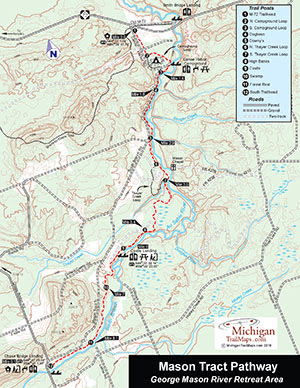 The Mason Tract contains 11 miles of the South Branch but not a single cottage or dock. This natural setting attracts hordes of weekend canoers in July and August who share the waters with fly fishermen.

But on land you encounter only hikers as even mountain bikes are banned from the pathway.

For the next 3 miles the South Branch rarely left our view. Sometimes we were on a low bluff above it, occasionally we would drop to the edge of it but it was always there, the river that Mason loved.

Eventually the pathway swung away from the South Branch and passed through a stand of old growth timber. One white pine that towered above us looked like it belonged in Hartwick Pines State Park. Within a mile we returned to the river at the Highbanks, a popular stretch for fly fisherman, and a half mile later we arrived at what is left of Durant’s Castle.

The mansion took two years to build and cost almost $500,000, an extraordinary amount of money for a summer home at a time when the country was suffering from the Great Depression.

It included a gym, barber shop, walk-in vault, seven fireplaces and was wired for a ticker tape so Durant could keep one eye on Wall Street even from the middle of his personal wilderness. The castle was finally finished in the fall of 1930 and mysteriously burnt down in February of 1931. All that remains today are parts of the foundation and half a fireplace.

After reading about Durant’s misfortune on a display board, we wondered what would have happened if the castle never caught on fire.

Would Mason still have purchased the land and then bequeathed to the people of Michigan? Would we be here right now?

“Funny how things turn out,” somebody said.

We all agreed and then pushed on to finish the remaining 3 miles of our hike.