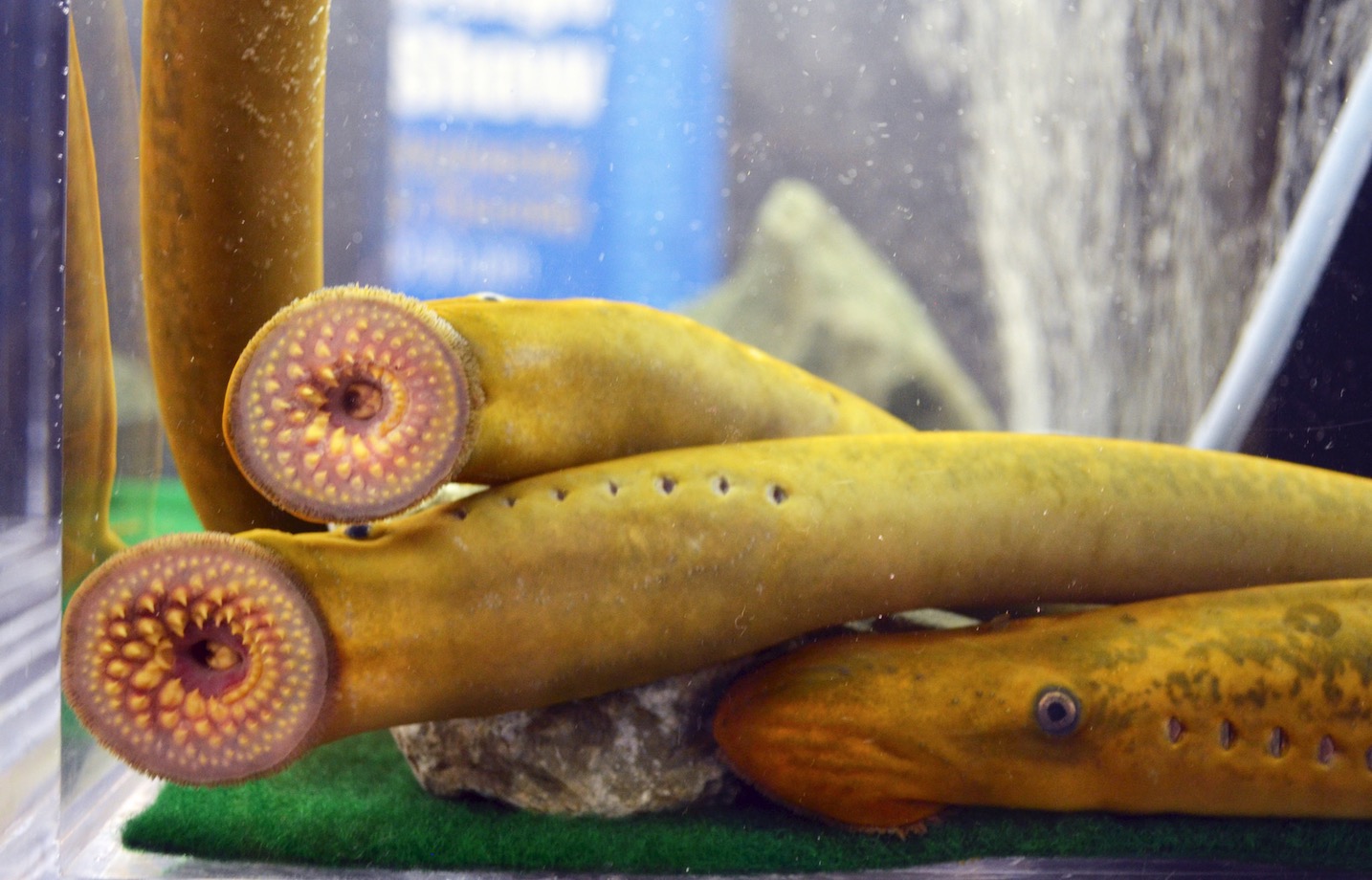 Sea lamprey provided a clue for researchers searching for the secret behind male fish’s ability to expel mercury from their bodies. Image: Joanna Gilkeson, USFWS.

Sex hormones might be the secret for lowering mercury in fish and maybe humans, researchers say.

States often issue consumption limits in areas with high concentrations of mercury in fish. The contaminant causes sickness in the people who eat them. Mercury poisoning is especially harmful to unborn children.

Not much is known about how contaminants like mercury and PCBs affect fish, said Rick Rediske, senior program manager at the Robert B. Annis Water Resources Institute at Grand Valley State University in Muskegon, Michigan. They harm reproduction in ways that aren’t well known.

Researchers now believe that male fish are able to shed mercury, thanks to their testosterone.

Male fish accumulate higher contaminant concentrations than females, but also eliminate mercury more efficiently, according to a study published in 2016 in the scientific journal Biology of Sex Differences. They probably have testosterone to thank, said Rediske, who helped author the study.

Male fish have higher resting heart rates, are more active and tend to swim faster–they therefore eat more and take in more contaminants like PCBs and mercury, said Charles Madenjian, the study’s lead author and a research fishery biologist with the Great Lakes Science Center in Ann Arbor, Michigan. Food is the greatest source of these contaminants in fish.

When the team tested for pollutants in Great Lakes fish, they found the males’ PCB concentrations were 17 to 43 percent higher than in the females, he said. They expected to find a similar pattern for mercury. Instead, they found similar levels in both sexes.

“We were scratching our heads to figure out: why the difference between the two contaminants?” Madenjian said.

Sea lamprey offered some clues. Lamprey males had the sort of higher mercury levels researchers had expected in the other fish, indicating that they weren’t able to eliminate mercury as efficiently, he said.

Lamprey, which are an invasive parasite, are an older species with more primitive sex hormones in place of testosterone, he said. Testosterone may be the missing key that allows some fish to somehow eliminate mercury.

If true, that finding could change the way scientists study mercury contamination.

“We think those characteristics apply not only to almost all species of fish, but also up to birds, reptiles, all the way up to the full gamut of vertebrates,” Madenjian said.

Researchers still need to explore that possibility, Rediske said. In the meantime, the study’s findings could also affect how mercury advisories are issued.

The DNR may want to start setting those limits more conservatively, Rediske said. Although male fish in the Great Lakes are able to expel mercury, their intake is still high enough to leave them with higher concentrations than the females.

“It’s just a confounding factor when we set the fish advisory limits,” he said. “It would just suggest that there’s more variation than what the current models are set up to look at.”

This article has been edited to correct the Great Lakes Science Center’s location, which is located in Ann Arbor, Michigan, not Cleveland, Ohio.