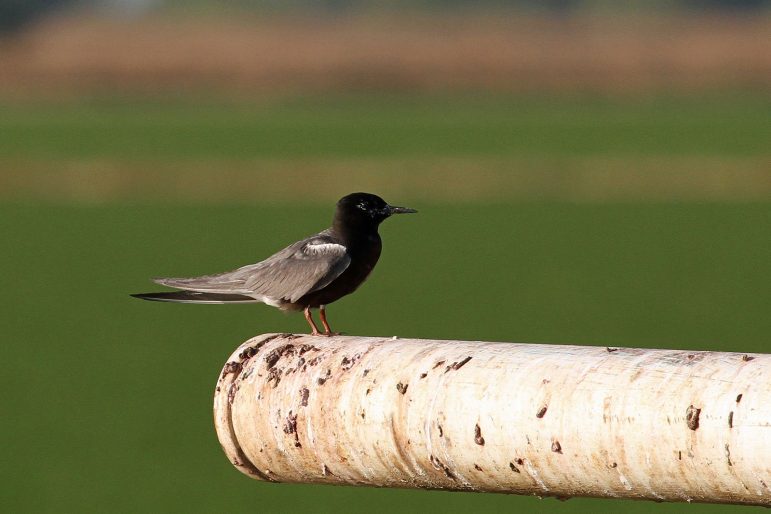 The once-abundant black tern is far less abundant in Great Lakes wetlands, a victim of habitat loss and invasive plant species. And there’s a high risk that more colonies will be abandoned, according to a new study.

Since 1991, the number of active black tern colonies has plummeted nearly 90 percent, the study found. Major factors included changes in vegetation from invasive plants at breeding sites and land development near colonies.

“Decline of black terns in the Great Lakes region has been severe, and preventing abandonment of remaining colonies is an important stop-gap measure for maintaining he bird’s presence until the causes of its decline are better understood,” study authors Katherine Wyman and Francesca Cuthbert of the University of Minnesota wrote.

“Many scientists view continuing wetland habitat loss and degradation as a major barrier to black tern conservation in North America,” they said in a new article published in the journal Wetlands Ecology and Management. And fewer breeding sites increases the birds’ vulnerability to natural disasters.

Terns aren’t the only beneficiaries of coastal wetlands preservation and restoration.

Cuthbert said fish nurseries benefit, as do other birds such as the least bittern — a threatened or endangered species at the state or provincial level in Michigan, Ontario, Pennsylvania, New York and elsewhere — Virginia rail, pied-billed grebe and marsh wren. All those species need water they can walk, swim or forage in.

In Michigan, black terns are “not doing well,” and the state Department of Natural Resources (DNR) has listed them as a species of “special concern,” said Rachelle Roake, the Michigan Audubon Society’s conservation science coordinator.

Bird survey data show generally a 3-to-8 percent annual decline since the 1960s, Roake said. She cautions that survey data is more difficult to collect for waterbirds like the terns.

Terns, which feed on fish and insects, generally nest in deep-water wetlands colonies with two to 50 breeding pairs. Their nests are built on floating layers of plants that are hard for scientists and predators to reach.

“They have lost a lot of habitat. They’re also very specific in the type of wetlands habitat they like, a mixed mosaic of open water and emergent vegetation, which can be somewhat hard to find nowadays,” Roake said.

Consider Michigan’s Upper Peninsula, where 50 to 100 pairs of black terns used to nest each summer at Ogontz Bay near Escanaba. In 2016, that number dropped to 15 nests — and none in summer 2017, said Caleb Putnam, the Michigan bird conservation coordinator for the DNR and Audubon Great Lakes.

Fluctuating water levels may be responsible for determining the extent of aquatic vegetation such as the marsh bulrushes that form nesting platforms for terns, Putnam said.

Terns are flexible and find alternative nesting spots “but we don’t know where the birds went,” even after an airplane survey of Big Bay de Noc and Little Bay de Noc, he said.

As for villains, the new study identified invasive wetland plants that grow at high density, such as phragmites and reed canary grass. They grow so thickly that they leave no natural gaps to provide protected nesting sites and access to open water where terns can forage for food.

In addition, the study found that the proportion of developed land within 550 yards of colony sites related to high rates of colony abandonment, while those surrounded by agricultural land are more likely to survive.

“Colonies on Lake Michigan and Lake St. Clair were more likely to be abandoned than colonies on Lake Huron, including St. Marys River, or Lake Ontario,” according to the study.

For example, the study said the St. Clair River Flats, a delta that’s home to an estimated 145 to 400 pairs of terns, faces intense pressure from development, and future development may increase the risk of colony abandonment. The delta, the largest in the Great Lakes system, is at the mouth of the St. Clair River in Lake St. Clair and sprawls across the Ontario-Michigan border.

Putnam said terns do well there because of extensive floating maps mats formed by the prior year’s dead bulrush stems.

To the contrary, they say the probability of abandonment can be reduced if conservationists and land managers focus on restoring wetlands by managing vegetation and eradicating invasive plants. Their study also called for minimizing development activities near the colonies.

As for the future of already-abandoned colonies, Audubon’s Putnam said, “My guess if you can promote enough openings and promote formation of mats, there’s a chance you can recruit them to come back.”

A monitoring project planned for next summer will experiment with clearing three areas in a DNR-owned cattail marsh in Saginaw Bay’s Wigwam Bay State Wildlife Area on Lake Huron, he said.