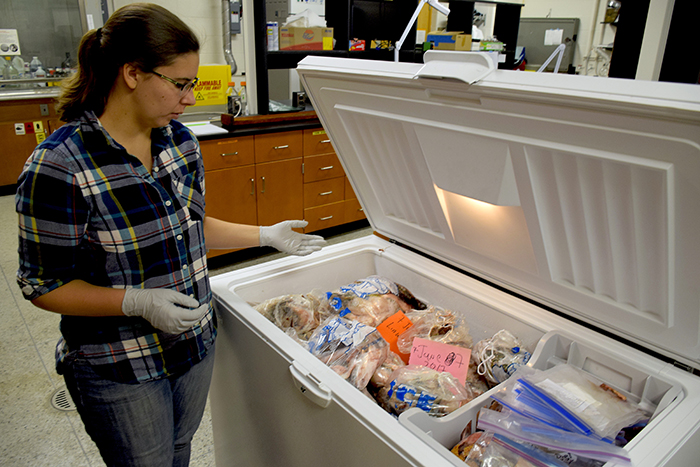 All stomachs are being stored in this freezer, sharing space with samples from another study. Image: Evan Kutz

Stomachs of more than 1,000 fish from Lake Huron and Lake Michigan in a freezer at Michigan State University are waiting to be dissected as part of a study critical to managing gamefish.

But a lack of funding is putting on ice the project that is important for gauging the health of predator-prey relationships in an ever-evolving ecosystem. 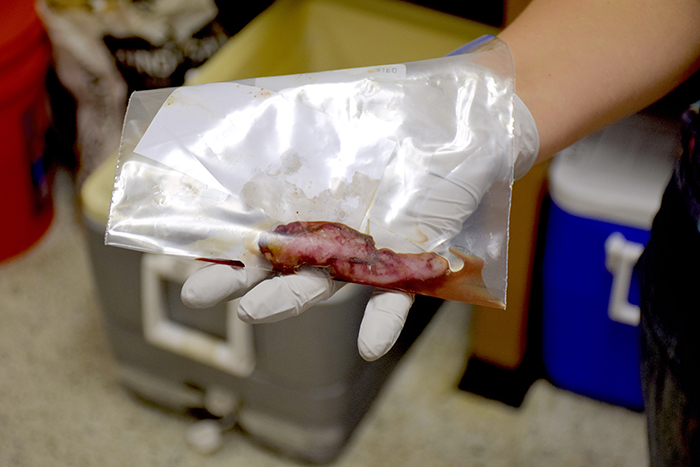 Grad student Katie Kierczynski slices the stomachs in half, like this one belonging to a walleye. Image: Evan Kutz

So now fisheries scientists are asking Great Lakes residents to help with a campaign  to raise the $8,500 needed to hire students to analyze what’s in the stomachs that the public has already contributed to the effort.

“It really is an important study, and an important time to do this,” said Michigan Sea Grant Extension educator Daniel O’Keefe, who worked with anglers to accumulate the stomach collection. “Hopefully a couple of years from now we’ll have lots of cool answers on what we found.”

The donations will help hire Michigan State University students to provide data to the public and management agencies. At the same time they’ll gain experience for careers in fisheries and fisheries management. 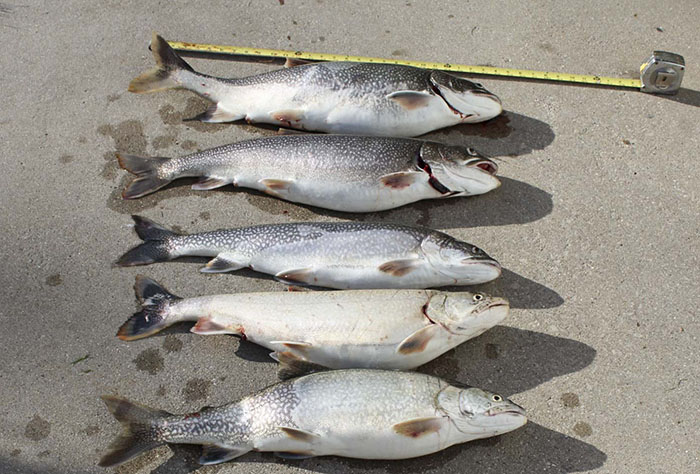 These particularly large lake trout caught outside Rogers City had plenty of prey to feed on. Image: Frank Krist

Katie Kierczynski, an MSU fisheries and wildlife graduate student, has already processed Lake Huron fish stomachs with the occasional help of lab assistants. She plans to finish before spring, when Lake Michigan’s samples are scheduled for processing. That’s a big task for a small team.

The work is challenging. Digested fish lose their skin first, making it unlikely to identify them from skin pigments. They must instead be identified by their bone structure, Kierczynski said.

“It’s easier to do the ones that are not digested as much,” she said. “You’ll get some that are four to five vertebra and some mush.”

She cuts the stomachs in half to identify a Great Lakes predator’s meal plan. That can include terrestrial insects, like moths and beetles–but largely consists of other fish. Walleye can eat fish because of their larger stomachs. Kierczynski is also examining lake trout with even larger stomachs.

O’Keefe had done similar analysis for his master’s degree.

“I can tell you, it’s a pretty cool job and it’s really fun… sounds kind of gross, but it’s pretty interesting to see what they eat,” he said. “It’ll be a good experience for whichever students wind up doing this.”

O’Keefe spearheads many citizen science programs. The diet study is a great way for anglers to contribute to knowledge of the Great Lakes, he said. He helped create a video that demonstrates how to cut out the stomachs, zip them into a labeled plastic bag and drop them off at a local Department of Natural Resources cleaning station freezer.

Without their help, it would have been impossible for biologists to collect samples in all locations throughout the year, he said. So the project teamed Great Lakes anglers with scientists from the U.S. Fish & Wildlife Service, U.S. Geological Survey (USGS), Michigan DNR, Wisconsin DNR, Michigan Sea Grant and MSU. 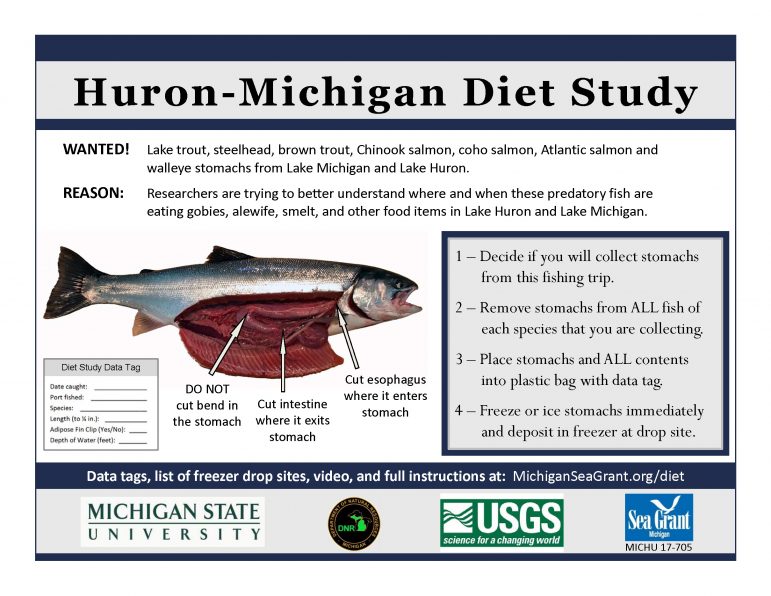 This infographic was used as instruction for anglers collecting stomachs to donate the diet study.

It’s a chance for the public to get involved in science that is relevant to their lives, said Brian Roth, an associate professor in MSU’s Fisheries and Wildlife Department and the project’s leader. And they should get a return on their investment.

“We really appreciate those folks that donated stomachs and hope we can pay it back by providing a rigorous analysis,” Roth said. “We’re just one piece of the puzzle, which is in my mind a real strength of this project. It represents a real nexus and a real opportunity to succeed in our land grant mission here at MSU.”

The study had sought U.S. Geological Survey funding to research both lakes. It was only awarded enough for the Lake Huron samples. But enthusiastic anglers had also contributed enough fish from all seasons and regions from Lake Michigan. Without additional funding, their work cannot be analyzed.

The activity is fast-paced, but posed quite a mess to dig through, said Eric Braden, vice president of the Michigan Steelhead & Salmon Fisherman’s Association, who helped with the collection.

“It can also be a lot of fun for the stomach handler to keep track of what he has in his hand, to keep the forms legible and get it in the correct bag,” Braden said. “The cleaner is usually halfway through the next fish before the previous one was bagged, so trying to remember a certain fish’s length on a good day can definitely add to the fun.”

The project provided a close-up lesson in fish food. 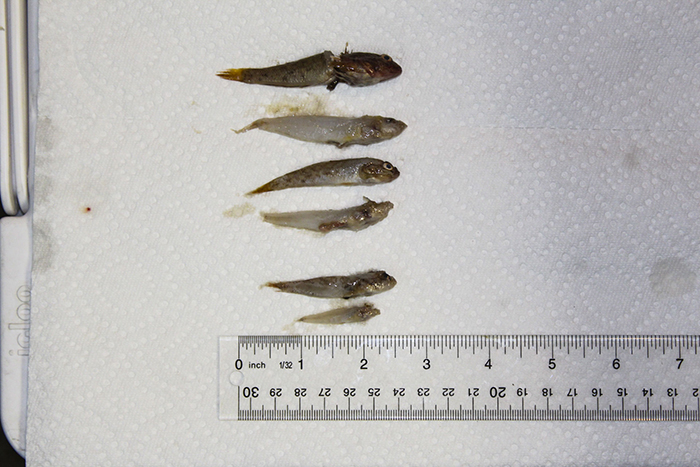 These round gobies were found inside a chinook salmon in Lake Huron outside Rogers City. Image: Frank Krist.

“There were many comments among those at the cleaning tables about not only the types of fish found in the stomachs, but size and numbers as compared with past years’ fishing,” he said.

“The fishermen standing in line are more than understanding once they learn of the program, the process and how easy it is to participate and what the benefits are to obtaining this information to help drive future management of the Great Lakes,” he said.

Fisheries managers model the predator-prey balance to inform stocking and harvesting policy. Diet studies are a critical component for understanding that balance.

“When you get into the weeds of Great Lakes fisheries management, a lot of it has to do with how many predator fish are out there and how many prey fish they’re eating,” O’Keefe said.

Past diet studies weren’t extensive and are now outdated for lakes that have undergone sweeping changes over the past 15 to 20 years. That’s partly caused by an influx of invasive species, O’Keefe said. Fisheries managers understand that old assumptions may be incorrect.

“That might seem a little esoteric,” he said. “But it really has a big impact because every year fisheries managers decide how many fish to stock, but we don’t know how much.”

While invasive species like round gobies can present environmental issues, they are also food for many gamefish. And while invasive zebra and quagga mussels have reduced the food in open water, they provide food for fish like the round goby. 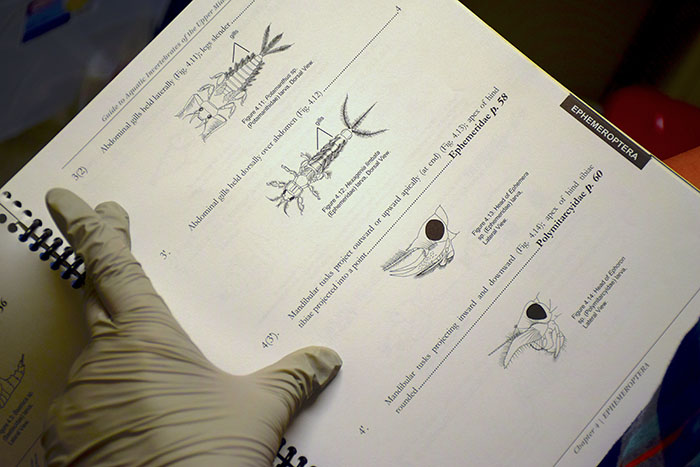 Kierczynski has discovered zebra mussels inside lake trout, but more likely is that the Great Lakes invaders end up as an occasional meal for the bottom-dwelling gobies. Although chinook salmon struggle to adapt to different food, other fish like lake trout, brown trout and walleye adjust their diets to include other fish like round goby.

Between 2003-2004, Lake Huron alewife populations crashed. That invasive species had become a key food for fish like chinook salmon. So its loss also caused predator populations like salmon to drop.

Alewives are a big deal for such a small fish, and have a complex predator-prey history with chinook salmon.

Increased predation on the shrinking alewives populations only contributed to their collapse, so chinook salmon populations are declining and unlikely to recover as a consequence, according to a University of Michigan study.

Alewives declined for a combination of reasons, said Kierczynski. Invasive zebra and quagga mussels ate their food, and low nutrient levels reduced productivity, undercutting new food sources from growing.  Runoff from farms has maintained nutrient-rich waters capable of sustaining the zooplankton and phytoplankton that fish eat, but zebra and quagga mussels are efficiently feeding off the thriving plankton. High mussel populations then trap the accumulated nutrients within their indigestible shells.

Figuring out such complex and evolving predator-prey relationships is why it’s so important to continue and even expand the diet study, Roth said.

“We’re not able to get the kind of coverage–in terms of collecting diets from as far of a spatial extent–that we want,” he said. “So we’re kind of at the mercy of whoever puts diets in the freezers.

“If we were able to grow the project, we could send people to more tournaments and more ports on a weekend to collect more diets from more locations.”