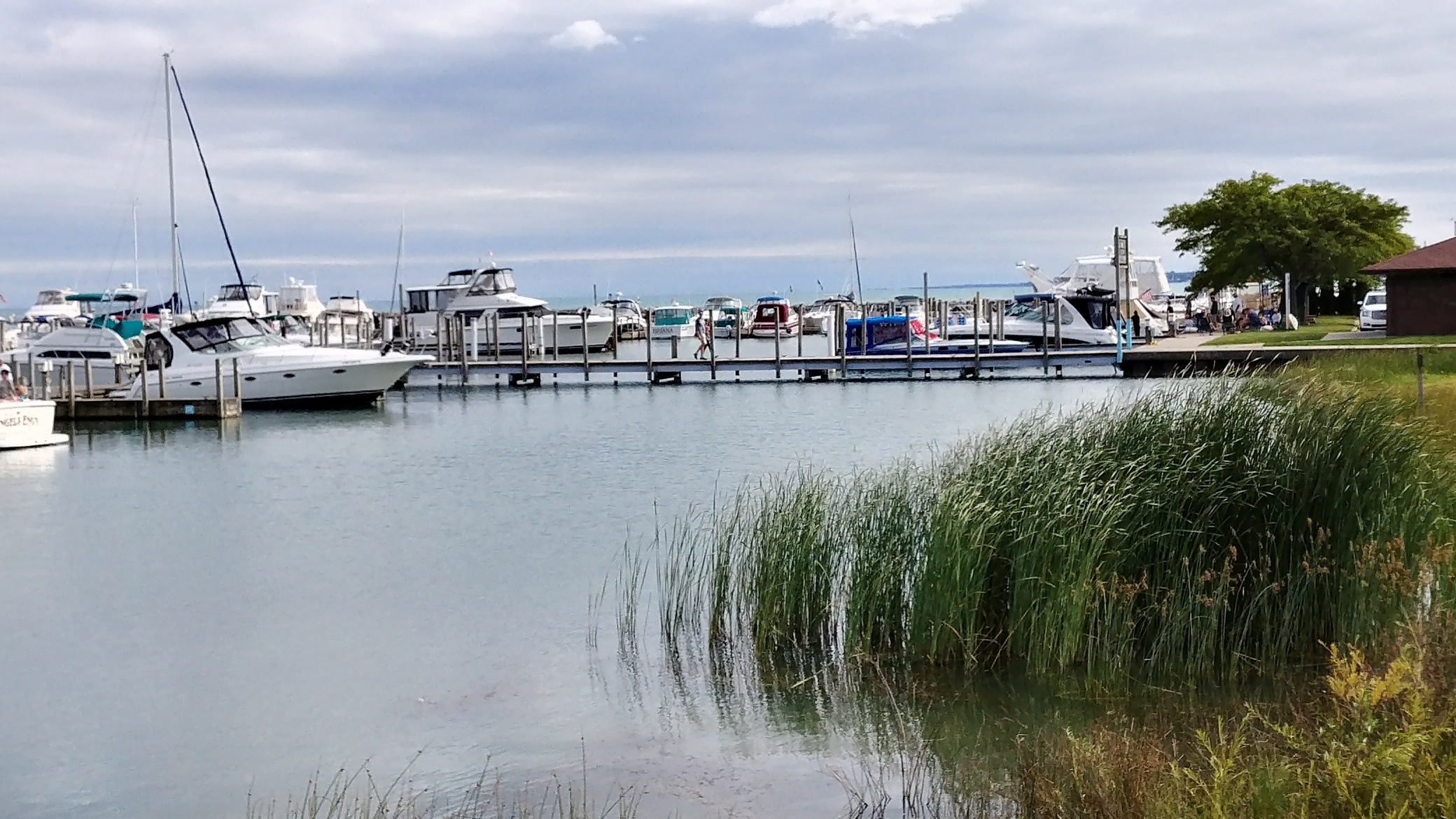 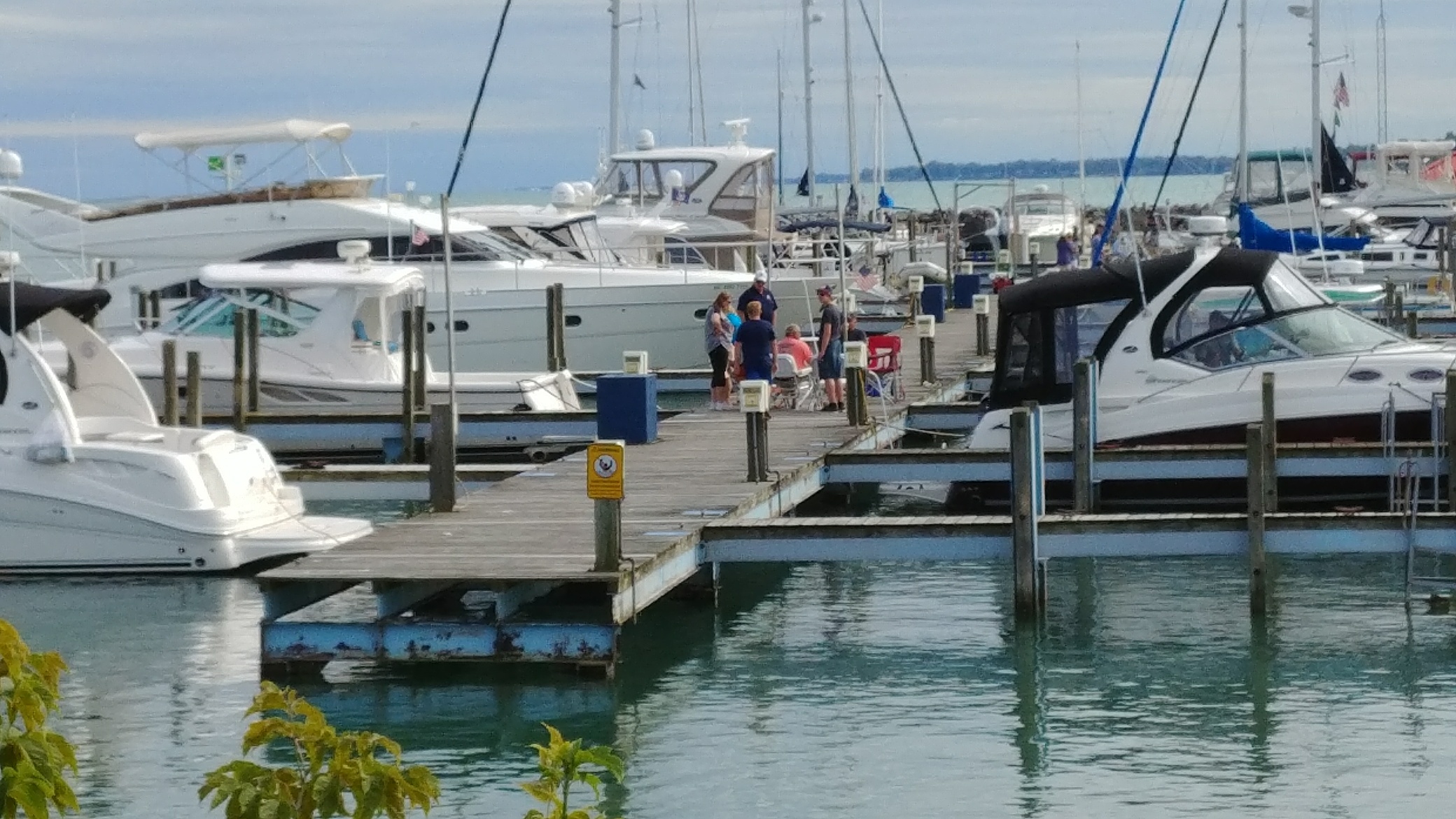 Boaters relax on a dock on an early fall afternoon. Image: Eric Freedman 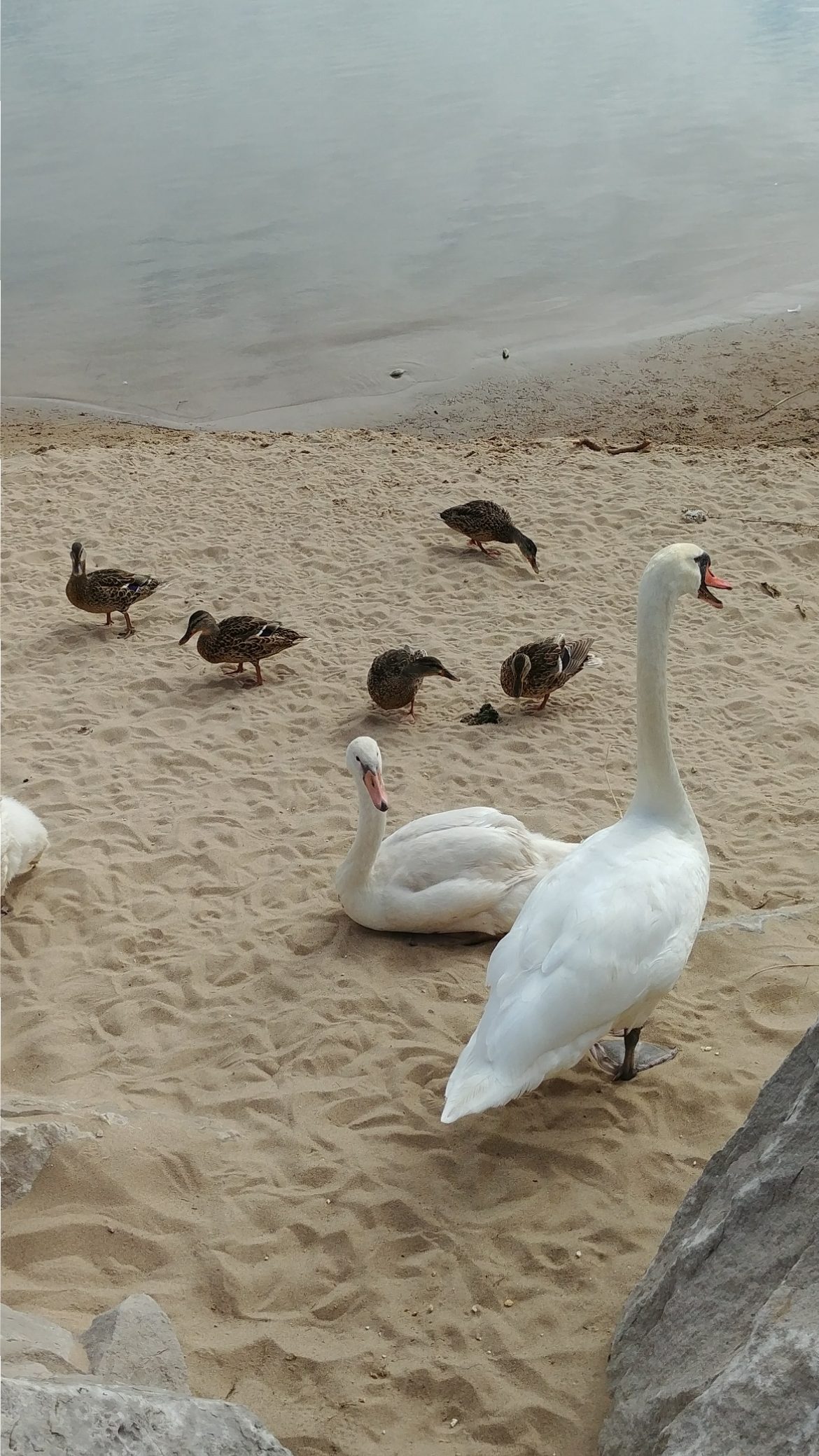 Waterfowl leave their mark on a sandy patch next to the breakwater. Image: Eric Freedman 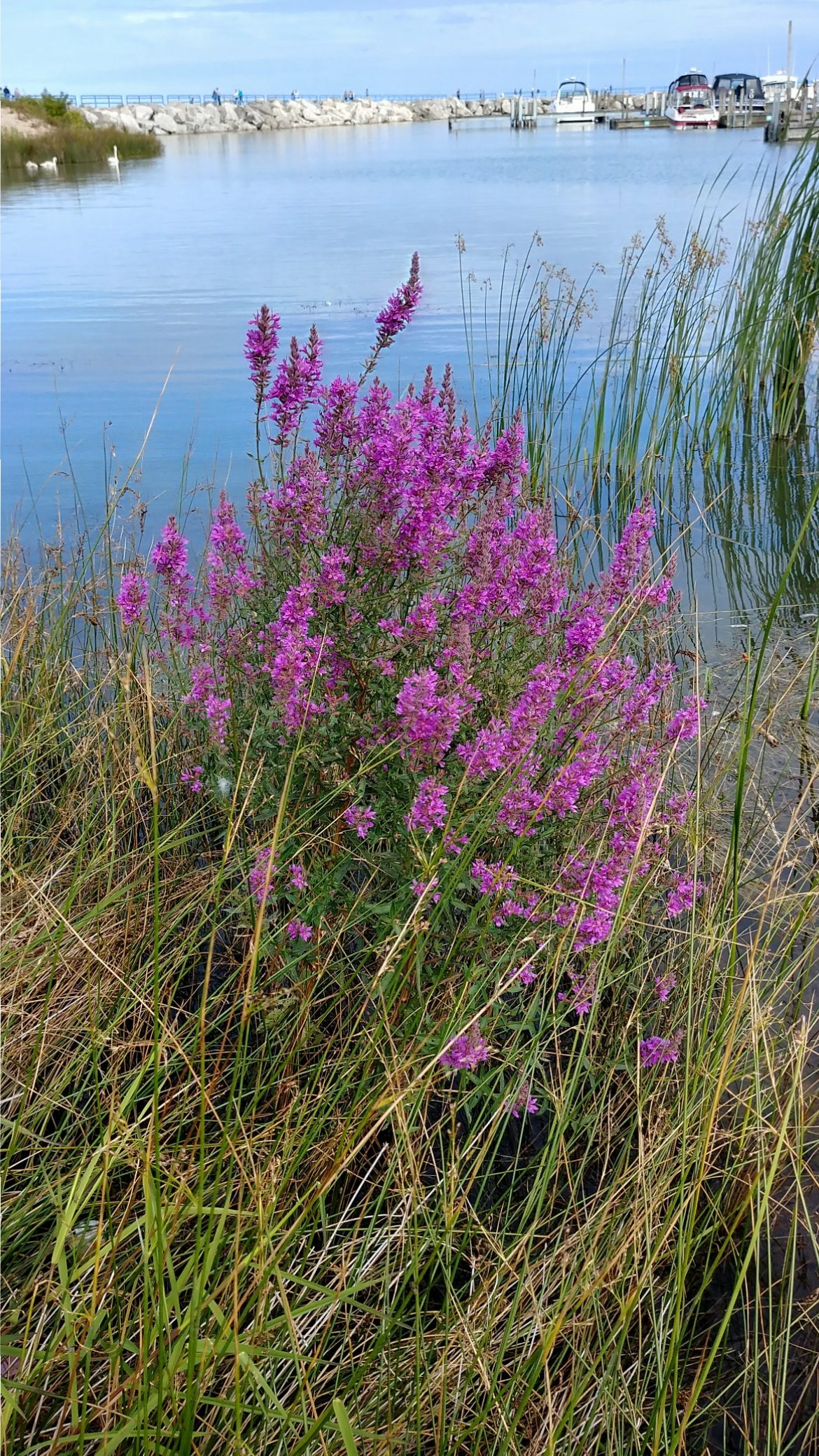 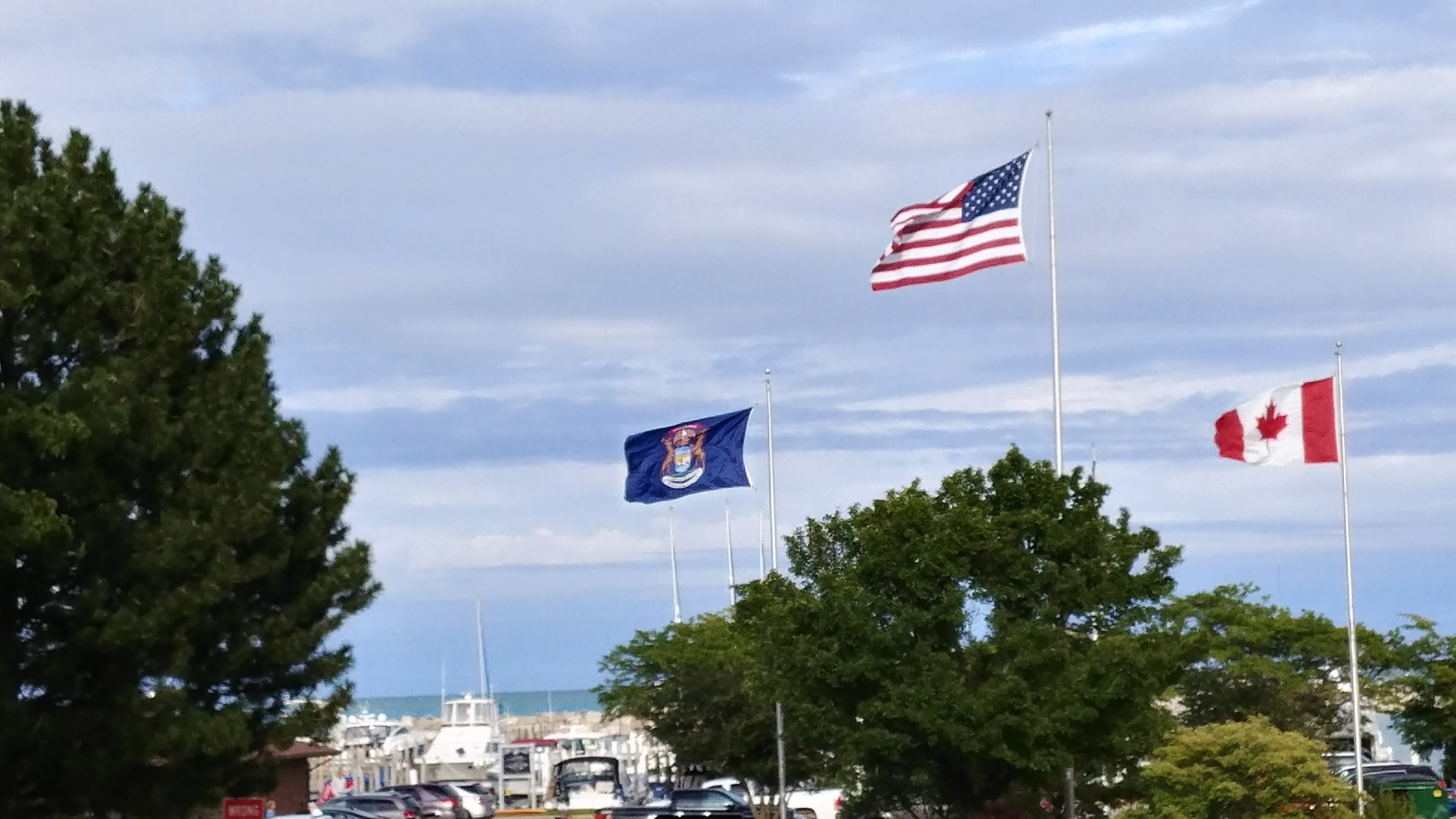 The flags of Canada, the United States and Michigan greet those arriving at the harbor by boat or by land. Image: Eric Freedman

The village of about 1,000 residents is low-key, with restaurants, small shops and a sweeping view of the lake, where freighters can be seen passing on the horizon and where children swim along a small sandy beach.

The harbor has more than 100 slips for recreational craft, and the U.S., Canadian and Michigan flags fly by the harbor’s parking area.

It’s designated a “harbor of refuge” by the state and the U.S. Army Corps of Engineers.

The village boasts of its “Friendly people… Warm hospitality… Small town charm,” as well as its “vibrant music scene.”

However, the early fall calm of the water belies the hazards that sailors may face near here.

During the Great Storm of November 1913, the Montreal-based Regina, a freighter, carrying a load of sewer pipe, sank 7 miles offshore from Lexington. None of its crew of 25 survived.

That storm with its blizzard and hurricane-force winds, was “one of the grimmest storms on record,” Frank Barcus wrote in his book “Freshwater Fury: Yarns and Reminiscences of the Greatest Storm in Inland Navigation. “With its nightmare tragedies, it was the greatest disaster in the history of the Great Lakes.”

Nineteen ships were destroyed and more than 250 people died.

Divers found the Regina’s upside-down wreck in 1986, and it’s now a popular destination for scuba divers.

One thought on “Photo Friday: Harbor town Lexington, Michigan has charm and history”