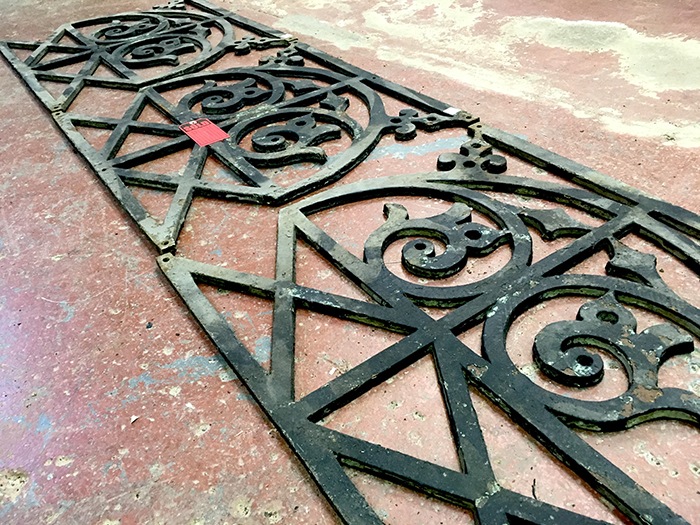 Iron roof cresting from Detroit City Hall that Materials Unlimited is restoring for use in new brewery in the Detroit Eastern Market Cooperation. Image: Lucy Schroeder

Editor’s note: This is the second in a series of stories about domicology, the study of policies, practices and consequences of abandoning buildings.

Workers with Reclaim Detroit, a nonprofit deconstruction organization, once saw a human arm among the other trash in the basement of a blighted house.

At first, they thought there was a body in the house, said Jeremy Haines, executive director of Reclaim Detroit. On closer inspection, workers realized it was just a mannequin.

Fake body parts aside, the house the organization was taking apart was one among many abandoned houses in Detroit. According to a U.S. Census five-year estimate, over 183,000 homes in Detroit are vacant–making up 75 percent of the vacant houses in Michigan.

Often they have been exposed to the weather and have unknown amounts of damage, leading to high amounts of waste.

“It’s like opening a present–every house is a little different,” Haines said.

Sometimes the workers uncover unique historic treasures such as piles of 70-year-old negatives found strewn about an old photo studio, he said. Another time they found newspapers from 1928 used as vapor barriers in an attic floor. Yet another find was an old journal that they connected with a living relative.

But most often, the crews bring in doors, bricks, hardwood flooring, trim and lumber from the houses’ frame.

The lumber in its different dimensions are one of Reclaim Detroit’s warehouse’s hottest commodities, Haines said. 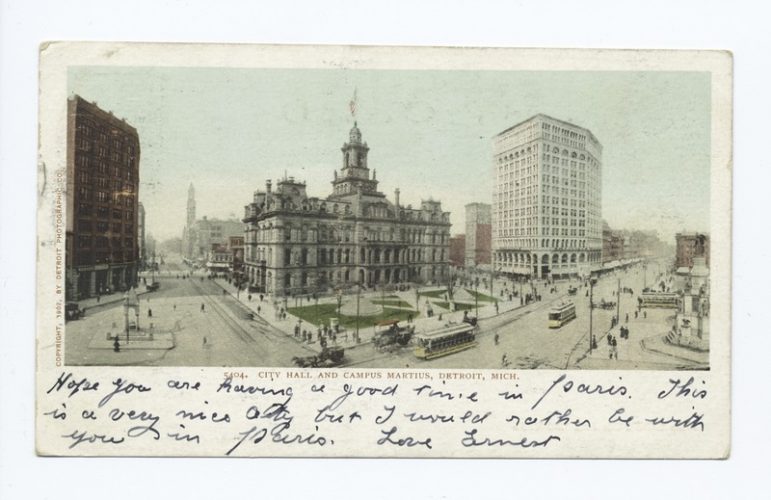 Another salvaged wood material gaining popularity is lath. That is thin strips of wood that go behind a plaster wall. Though it is more expensive to reclaim because of removing the plaster and nails, lath is thin and easy to affix to other things, making it popular with designers and artists, Haines said.

The business has a mill shop where workers handcraft vases and cutting boards from reclaimed lumber.

It’s a challenge to keep construction waste out of landfills. Michigan has some of the lowest tipping fees in the country, making it easy and cheap to simply demolish old buildings and send them to landfills, said George Berghorn, assistant professor of construction management at Michigan State University.

Berghorn is part of a group of researchers at MSU studying domicology–a term they use to describe the study the policies, practices and consequences of abandoned structures. Part of their goal is to stop filling up landfills with demolished buildings and start recycling them.

The idea of reusing old building parts is not new. Even the ancient Romans reused elements from old buildings.

It’s just how it was done before it was normal to throw things away, Haines said.

That’s not what drives Reclaim Detroit. The organization began in 2011 with the vision of solving Detroit blight with a community development approach, Haines said. Now, it has expanded to deconstruct buildings throughout the Metro Detroit area.

One day it may be working on a church in the city, the next deconstructing a barn out in the suburbs, Haines said.

Reclaim Detroit has trained around 300 MetroDetroit residents in deconstruction, weatherization and environmental services. This training, Haines said, teaches people to value special objects so neglected that the rest of the world fails to see them.

Overall, they have found that the demand for reclaimed material outweighs the supply, particularly in Detroit, Haines said, “People want a piece of the Detroit story.”

It’s a market fed by such companies as Materials Unlimited, an antique and specialty restoration shop also working on a piece of the Detroit domicology story.

That shop acquired iron roof cresting, a decorative metalwork common on buildings in the 19th century, from Detroit City Hall, which was demolished in 1961. Now it is restoring the cresting for a designer working on a brewery going up in the Eastern Market section of Detroit.

The designer wants parts of Detroit in the new building, said Reynold Lowe, the president of Materials Unlimited.

The three-story store is filled with high-end antiques and architectural salvage. Customers are greeted by the warm glow of handmade glass shades and chandeliers. Light filters in through several large stained glass windows.

Upstairs, intricately designed door knobs and cabinet hardware gleam inside glass cases. Stacks of doors from 1870 to 1920 form a maze in the basement.

Lowe said he got into architectural salvage in the 1970s when an opportunity arose to acquire parts of the Michigan Municipal League building before it was demolished.

“It was fun and interesting, and I felt good about being able to save things from going to the dump,” Lowe said.

After working with demolition contractors, he decided he would rather save stuff than crush it up and decided to start his own shop.

The shop has three people working on restoration. These workers can relacquer old brass bed frames, refit broken window frames with new glass and do custom projects that allow customers to personalize their antique pieces.

“They want to own it, they want to be part of it,” said James Wilson, the director of advertising and marketing for Materials Unlimited.

Repurposing something old and broken into something new is his favorite part of the profession, Wilson said. A broken chandelier may be remade into a sconce. The top of an old dresser can be replaced with a sink and converted to a vanity.

“I see it as the second chapter of that piece’s life,” he said. “I don’t look at it like it’s destroying it.”

This way, people can reuse pieces, instead of throwing out something cool just because it doesn’t fit what you need, he said.

Pieces come to the shop in a variety of ways–sometimes because a building is being replaced. Sometimes they buy pieces back from customers who are moving.

Most of the salvaged materials come from Michigan and Ohio, Lowe said.

Still, there is a lot more than history to be salvaged from abandoned building.  The total lumber from the 244,000 abandoned homes in Michigan could equal as many as 551,000 trees that are 64 feet tall and three and a half feet wide

Architecturally valuable features account for only a certain percentage of the lumber in the building, Berghorn said. His team wants to find new ways to save that wood from landfills.

Tomorrow: Learn about the research to find new ways to reuse the wood holding buildings up.