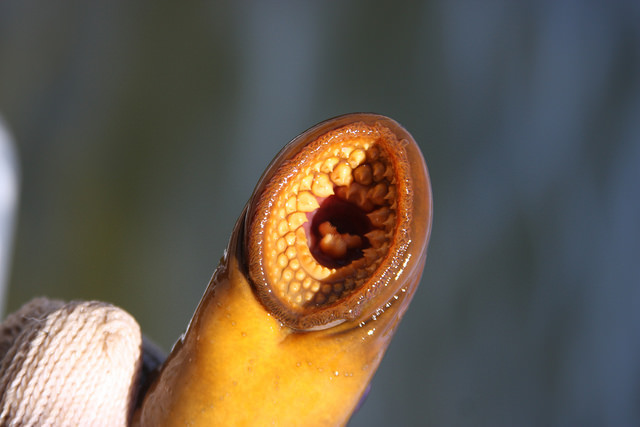 Dam removal could lead to the spread of sea lamprey. Image: U.S. Fish and Wildlife Service

This story is part three in a series about dams. Read parts one and two.

A proposed dam removal along Michigan’s Grand River faces significant delays due to its potential to disrupt river ecosystems. The environmental risks involve the fate of two animals: sea lamprey and snuffbox mussels.

The Sixth Street Dam in Grand Rapids  was installed in the mid-1800s to ship milled logs downstream by controlling the water’s height and flow. It drowned the river’s naturally occurring rapids, allowing logs to float over them.

Eventually log transportation no longer relied upon the river, but the dam remained.

Years of inadequate maintenance began to pose a public health hazard to kayakers and swimmers. In 2013, firefighters rescued two kayakers after the bumped against the dam and capsized. This and other accidents motivated city and state agencies to get the removal process going in earnest.

“This project has been going on for about eight years and has probably got a good eight years to go,” said Wendy Ogilvie, the director of environmental programs for the Grand Valley Metropolitan Council. The council is a regional governing body representing the west Michigan counties of Allegan, Montcalm, Ionia, Ottawa, Barry and Kent.

One of the project coordinators working with Ogilvie, Matt Chapman, is the founder and head of Grand Rapids Whitewater. The non-profit organization’s original mission was to restore the rapids  for recreation, but it has evolved into a “holistic river revitalization.”

“Recreation is certainly still a component of it . . . but much more of it is focused on making the river a better place for the animals and creatures that live in it as well as those of us that want to play on it,” Chapman said. 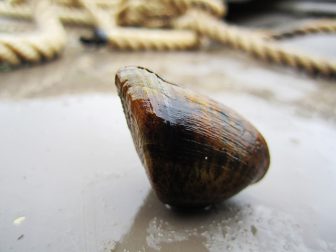 Due to pollution and invasive species, many types of freshwater mussels are on the brink of extinction. This rare wild snuffbox mussel was found in the St. Croix River during routine winged maple-leaf mussel work. Snuffbox mussels were listed as a federally endangered species in 2012. Image: US Fish and Wildlife Service

Lamprey are an invasive parasites that attach themselves to fish like a leech and feed off the their blood and bodily fluids, killing them in the process. They could spread along rivers and tributaries without the  dam to stop them.

“Removing the existing Sixth Street Dam would require a new structure to be built that would also stop sea lamprey,” said Jay Wesley, the Lake Michigan basin coordinator for the Michigan Department of Natural Resources.

“A sea lamprey infestation could be quite severe if they’re allowed to get past Grand Rapids,” he said.

Engineers hired by Grand Rapids Whitewater, working with the U.S. Fish and Wildlife Service and the Great Lakes Fishery Commission, intend to install an adjustable structure a mile upstream from the dam, Chapman said.

Obermeyer Hydro, Inc. is the manufacturer of this structure, said Chapman. They have installed similar adjustable structures across the country and around the world.

“The application of using Obermeyer adjustable gates for sea lamprey control is emerging and one we think will provide a range of benefits that include public safety and flood control improvements, sea lamprey control, natural river connectivity and enhanced recreational benefits,” Chapman wrote in an e-mail.

While the sea lamprey challenge was known from the outset, the discovery of endangered snuffbox mussels added another layer of complexity to an already intricate undertaking.

“The Grand River has always been known as a very good source of clams and mussels,” Ogilvie said. “But no one had really researched it that much, there just hadn’t been any interest just because there hadn’t been any construction plans on it.”

The snuffbox mussels were first noticed in the summer of 2011, when water was low enough that biologists from Central Michigan University and Grand Valley State University and DNR specialists could wade it. A nearby highway renovation also helped reveal the presence of this endangered species.

Their mussel inventory revealed five living snuffbox mussels, kicking off conservation efforts to ensure the species would not be severely harmed by the dam removal. Grand Rapids Whitewater consulted with Heidi Dunn, an ecological consultant at Ecological Specialists, Inc., on what to do.

“We’re going to go in and remove as many mussels as we can before they start their project, but you can’t get them all,” Dunn said.

Mussels are important for the Great Lakes and its tributaries due to their feeding habits. Attaching themselves to hard surfaces like rocks, they filter micro-organisms like plankton and are a natural water purification system. They also help support aquatic insects and fish species.

“These animals are aquatic animals, people tend to think of them as rocks because they’re kind of in the bottom and just kinda hard shelled animals,” Dunn said.  ”You have to keep them in water, you have to handle them properly, you have to mark them all, you have to move them to a suitable habitat.”

Dunn and others have found new habitat areas upstream, between Ionia and Grand Rapids, where the mussels can be relocated. Doing so requires divers to go in at the dam site and dig up as much as six inches of the river bottom as mussels tend to burrow.

Chapman and others declined to give a timeline for when actual removal work would begin. Project coordinators are still planning for many aspects and Dunn hinted that the mussel relocation might take around a year to complete.

Grand Rapids is not the first Michigan city to deal with these environmental concerns,  Wesley said.

The recent removal of the Lyons Dam on Grand River ran up against mussel conservation problems and Traverse City  faced similar concerns of sea lamprey expansion with the removal of a dam from the Boardman River.

Such experience means the Grand Rapids has a greater chance of success, removal experts said.

4 thoughts on “Two species – one to preserve, one to control – challenge removal of dam on Michigan’s Grand River”