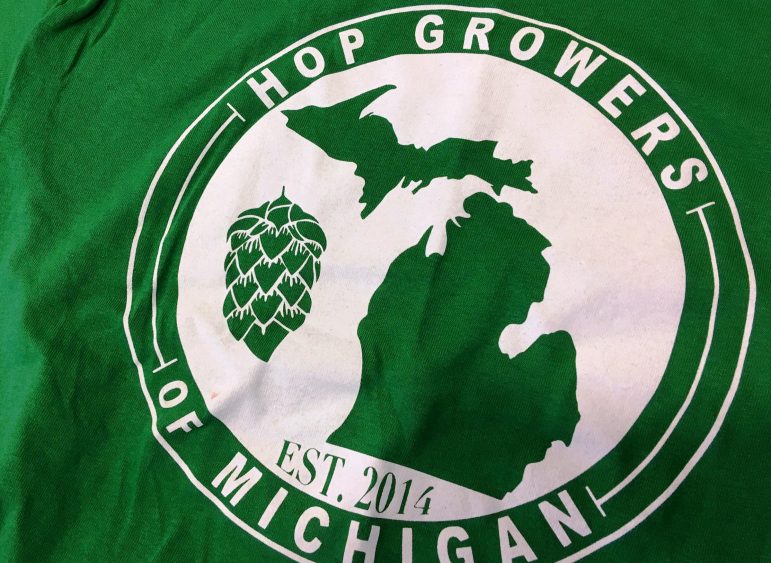 Hops, a key ingredient in beer, is making a comeback on Michigan farms. Image: Jim Peck

Sitting in a bar in Chicago, it’s pretty easy to find yourself surrounded by the flavors of Michigan.  It’s in bottles, pints, coming out of taps…

“As of this year, Two Hearted Ale will have our hops in it,” says Dan Wiesen, owner of Empire Hops, west of Traverse City.  “A lot of the New Holland beers, Founders beers and almost all the microbreweries up around the Traverse City area.  So, we’re in a lot of different beers right now.”

The hops Wiesen grows are a crucial component in some very popular beers.  Wiesen says you can taste the difference.  He says he knows from experience, being a bit of a beer drinker himself.

“There’s a lot of variation in the hops,” Wiesen explains.  “The hops are for the beer what the grapes are for wine.  They give it that different, distinct flavor.”

It’s the taste, combined with a kind of gap in the Michigan agricultural industry that’s turned Michigan into the number four producer of hops in the country.

Wiesen remembers when places in Michigan like Empire used to thrive on fruit crops, but he watched their decline over the past 30 years.  Hops are filling the void.  Right now, he’s got 30 full-time workers and he expects it to be about 80 full-time jobs next year.

The annual Michigan Hops and Barley convention is held in Detroit in March.  Dan’s here, surrounded by farmers and producers who are breathing life into a piece of the industry that died out.  Back in the 19th century, hops were booming in Michigan until disease wiped out the industry.

Now, there’s a way to fight that disease, and the hops business is again booming.  This convention is the place to come for information and guidance.  Dan Wiesen says they really need it.

“We do.  Very,  very much so.  We had no mentors like you would, say, the apple or cherry industry for fathers, grandfathers teaching you how to do this kind of stuff.”

Rob Sirrine from Michigan State University is here, too.  He’s a senior extension educator with MSU.  He works closely with growers like Dan Wiesen.

“Our whole goal is to help producers in Michigan become economically viable.”

The craft beer explosion is driving a lot of the thirst for more and different varieties of hops.  For MSU’s Rob Sirrine, that means a term familiar to the wine industry: terroir.

“So, if you grow cascade hops in Australia, in Yakima Valley (Washington) and in Germany, you’re going to get different flavor profiles from the exact same hop, depending upon where it’s grown,” he says.  “So, there is an aspect of that, and I think the brewers are interested in that as well.”

And that brings us back to Chicago.  Rob Sirrine wants you to know that a vital part of the beer boom is buying local.  And in the beer world, “local” is used a little bit liberally.

“Even in Chicago, there’s so many different people there from Michigan, Wisconsin and Minnesota.  So they consider Michigan agricultural products, for the most part, local products.”

For Dan Wiesen, that’s good news.  He says he expects some ups and downs like any industry…but he believes it’s here to stay.