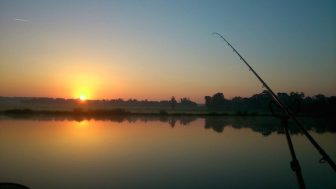 Fishing advisories could be exposing people to unsafe levels of contaminants. Image: Pixabay

Great Lakes fish consumption advisories could be inadequate and exposing consumers to higher levels of toxic chemicals than anticipated.

A new study says that the current approach to creating advisories doesn’t take into account what happens when more than one chemical is present in a fish. This means they are “probably deficient in protecting the health of human consumers,” the study says.

In Canada, advisories potentially expose fish eaters to four or more times the amount of contaminants than is considered safe, the study says.

Though the study was done in the Canadian waters of the Great Lakes, the findings could be highly applicable to Great Lakes states as well, Nilima Gandhi, co-author of the study and a researcher at the University of Toronto, said in an email. 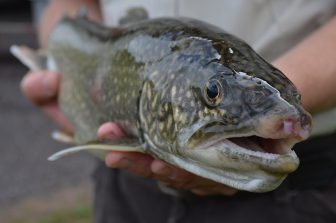 Trout have elevated levels of PCBs because they are fatty. Image: USFWS Midwest.

The major contaminants of concern are PCBs (polychlorinated biphenyls) and mercury. Both have serious health consequences when consumed in unsafe amounts.

Most Great Lakes state fish advisories and advisories in Canada follow the “one-chem approach,” which is only based on the most harmful contaminant, she said.

When using one-chem, researchers calculate a safe number of meals per month individually for each contaminant present, then choose the smallest number of meals. This means advisories are based on a single contaminant — the most harmful one.

Advisories based on this approach don’t consider how chemicals interact with one another. When there is more than one contaminant present, their health effects can be additive. That means they are even more damaging when combined. 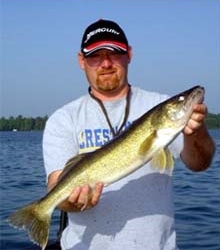 Walleye are top predators, meaning they have elevated levels of mercury. Image: Gavin Peterson on Wikipedia

The study recommends that advisories instead be based on a “multi-chem” approach, which would take into account the additive effects. This approach could mean more restrictive advisories for some of the most popular fish, such as walleye, salmon, bass and trout, Gandhi said.

In Canada, that approach would require half of advisories for the general population to be twice as restrictive, the study says. That means the recommended number of meals per month would be cut in half.

For around 10 percent of advisories, the meals per month would be even more strict – a quarter of what is currently recommended. The “do not eat” advice would also increase by 5 percent.

Some Great Lakes state advisories could be similarly impacted because they follow the same approach. But not all of them would be. Changing advisories should be done on a case to case basis, Gandhi said.

For example, New York advisories may not be impacted. They are based on a one-chem approach, but only when there is one major chemical of concern. But when many chemicals are present, the advisories include the additive effects, according to the New York State Department of Health.

Some advisories may also already have conservative measures built-in for extra protection. This means they might not have to be changed, Gandhi said.

In Michigan, a new set of conservative guidelines was developed in 2012 to keep fish consumers safe, said Michelle Bruneau, a health educator for the Michigan Department of Health and Human Services.

Prior to 2012 there were two different types of advisories – a conservative one for pregnant women and children, and a less restrictive one for the general public, she said.

The new guidelines removed the general public advisories, and instead applied the more conservative advisories to everyone, Bruneau said. This made sure all people, especially those who might have chronic health issues, are protected from contaminants.

So Michigan’s advisories may not be impacted by the more restrictive multi-chem approach because they are already conservative.

The study advises that each advisory agency should decide if their advisories are conservative enough to protect against the additive effects of contaminants.

If they don’t cover the added health threat, agencies should change their advisories to include a multi-chem approach, the study says.

Fish consumers should also consider the benefits of eating fish in addition to the risk, Gandhi said. Overall the best method is to “account for risk and benefit at every step of the advisory calculation.”