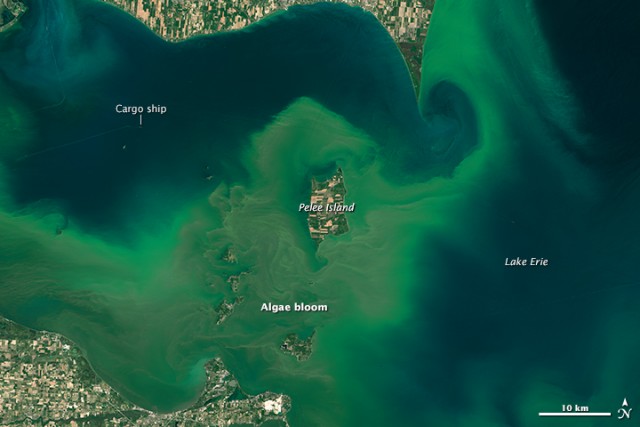 The action prompted calls by activists for Ohio officials to do the same.

Lake Erie has been threatened by toxic algae blooms for several years, threatening drinking water quality in Toledo and limiting recreational uses such as sports fishing.

Within the past year, the governors of Michigan and Ohio and the premier of Ontario signed a memorandum of understanding acknowledging the threat of toxic algae. They set a goal to reduce phosphorous loading up to 40 percent by 2025, according to Jill Ryan, executive director of Freshwater Future.

Phosphorous loading refers to runoff from agriculture and cities and from sewage systems that contaminate  the water. The nutrients from this runoff feeds algae and allows it to bloom more rapidly.

By designating Lake Erie as impaired, federal funding and expertise can be used to combat this  problem. The action met with approval by several conservation and environmental groups in the Great Lakes region.

“This is a big issue on our radar,” said Ryan. “The drinking water advisories have been one of the issues and this very toxic water that occurs that prevents you from swimming in it, touching it and certainly drinking it is a big problem.”

“This sets the stage for strong regional action that benefits people, communities and businesses, including the millions of men and women who fish, hunt and recreate in and around Lake Erie and surrounding habitat,” he said.

Michigan released a plan to combat the algae blooms that is expected to go into action in January. Ontario is still waiting to put out its plan, but Ohio has held off on declaring its side of Lake Erie as impaired, said Adam Rissien, the Clean Water Director for the Ohio Environmental Council (OEC.)

The group minced no words in a press release calling for Ohio leadership to take similar action.  Ohio has only brought attention to its shorelines and not the rest of the lake, Rissien said.

By not labeling the rest of the lake as impaired, Ohio limits the resources it can use to deal with the algae bloom, he said.

“Not only are they saying they’re not going to do it they say they can’t,” Rissien said. “And that is the headscratcher because Michigan figured it out.”