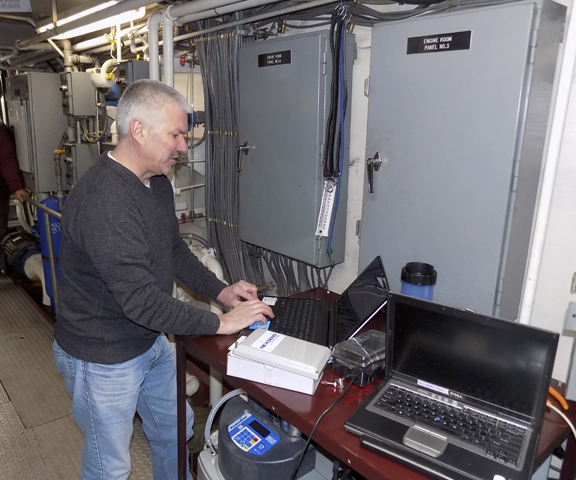 Tourists traveling by ferry between northwest Michigan and Lake Michigan’s Beaver Island will be riding with some groundbreaking cargo this summer.

The Beaver Island Boat Co.’s Emerald Isle ferry is fitted with equipment to detect changes in the temperature and chemistry of Lake Michigan, courtesy of researchers from Central Michigan University’s Institute for Great Lakes Research.

The equipment detects this data in real time aboard the ferry and distributes it via a website operated from the CMU Biological Station on the island, something never done before in northern Lake Michigan, said Dave Schuberg, an outreach coordinator and operations assistant at the station.

The equipment can also be turned on and off remotely from the research station, he said.

The research has far reaching benefits, said Don Uzarski, the institute’s director. High school educators will be invited to travel to his team’s Beaver Island research station and to use the research in their classrooms over the web.

The data collected on temperature may help recreational and commercial anglers predict fish behavior, Schuberg said. “Temperature really governs a lot of what happens out on the lake with things like fish spawning for salmon, whitefish (and) lake trout.”

Using the Emerald Isle, which travels between Charlevoix and the island, saves Uzarski and his team a hefty chunk of change, said Harvey Bootsma, a University of Wisconsin-Milwaukee researcher leading a similar program in conjunction with a ferry traveling between Muskegon and Milwaukee.

An average research vessel costs between $2,000 and $12,000 a day to operate, making long term projects like this difficult to fund under normal circumstances, he said.

There is a dearth of the types of data his team will collect on northern Lake Michigan, Uzarski said.

The sparse data collection is due to the ever-changing physical conditions and complexity of the lake, said Randy Claramunt, a biologist at the Michigan Department of Natural Resources’ Charlevoix Fisheries Research Station.

The physical conditions on the lake change dramatically even in a single day, he said. A single drop of water can contain many different elements that in turn support a rich ecosystem of algae, plankton, plants and aquatic wildlife.

That makes it hard to collect data in a way that is accurate and easy to comprehend in respect to how it relates to the greater Lake Michigan ecosystem, he said.

The Emerald Isle’s multiple daily trips will make it easier for researchers to account for these challenges, Uzarski said. And the research comes at an important time.

“These ecosystems are changing rapidly, faster than we can understand them,” he said. “We are at a critical time where we need the data so we can dampen the impacts we are going to see.”

The lake’s rising temperatures are changing life below its waves, he said. “We know we’re losing plankton and the salmon fisheries are doing worse.”

The plankton are losing out to the billions of invasive zebra and quagga mussels filtering nutrients out of the lake, he said. The mussels then produce nutrient-rich waste that stays trapped at the bottom of the lake.

The loss of plankton hurts the smaller, native fish that salmon eat, he said. “What could have been a very diverse ecosystem is instead limited to a few invasive species.”

Not all of the lake’s denizens are suffering, he said. Brown gobies, an invasive fish species, consume the mussels and have become a terrific food source for the lake’s growing trout population.

However the mussels absorb substantial amounts of lead and mercury from the water they filter. Those contaminants then pass on to the brown gobies that eat them which are in turn eaten by the trout, he said. As a result, people have to limit their lake trout consumption or risk being poisoned.

Michigan lake trout can contain unhealthy levels of dioxins, according to the Michigan Department of Health and Human Services’ most recent fish consumption guide.

Women who are pregnant, breastfeeding or plan to become pregnant in the next several years should not consume wild caught Michigan lake trout, according to the guide. Children under age 15 and people with health problems such as cancer or diabetes should also avoid the fish.

Even those who fall outside those categories should not consume the fish more than once or twice a year, according to the guide.

“When you have consumption advisories that strict we’re going down a bad pathway,” Uzarski said.