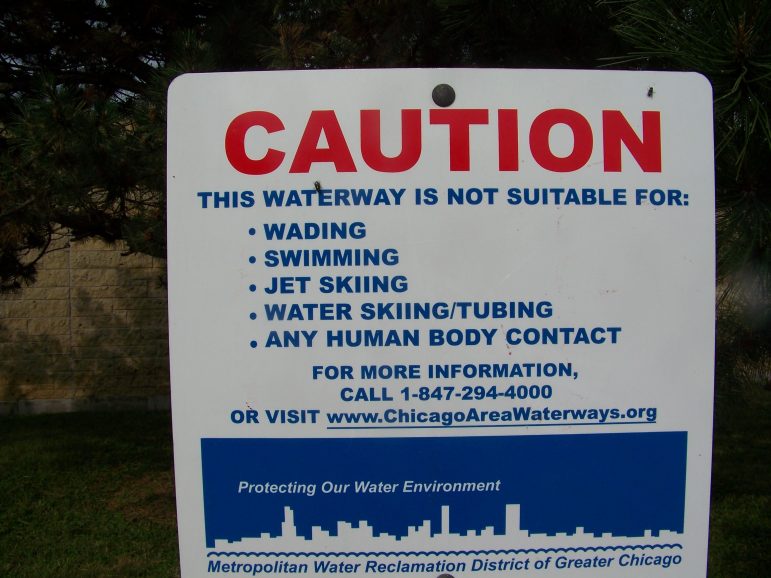 A warning sign at the Chicago Sanitary and Ship Canal. Image: USGS.gov

PCB emissions may still threaten residents of Chicago and other Great Lakes communities, according to a recently published study that calls for legislation to control the largest sources of the longtime pollutant.

Classified as a “persistent environmental pollutant” by the EPA, PCBs cause cancer in people and can damage their immune, nervous and endocrine systems.

“It’s not that there’s not enough being done about it,” said Scott Spak, co-author of the study and an assistant professor of civil and environmental engineering at the University of Iowa. “It’s about the focus of where the most funds have gone.”

Polychlorinated biphenyls, or PCBs, have been banned in the United States since 1979 when Congress declared these chemical compounds to be environmentally toxic. Production of items with PCBs was stopped.

The compounds were frequently used in electrical insulators, building sealants and caulks. They were common additives in electrical transformers and capacitors.

Most efforts to eliminate PCB emissions in the U.S. have focused on destroying 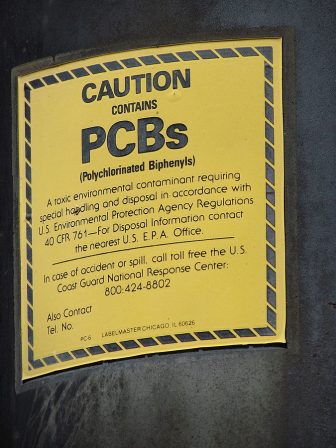 A warning sign on an electrical transformer in Chicago. Image: Alternet.org

legacy sources such as outdated transformers and other objects containing PCBs.

“Transformers are the biggest stockpile source, but not the biggest threat to the air,” said Spak. Such legacy sources generated during the initial period of PCB production were one of the focuses of the study in Chicago.

However, Spak said, “Uncontrolled sources are now the worst,” referring to ongoing sources such as paint, landfills and sludge beds that continue to release PCBs into the air.

The research suggests that efforts to eliminate the largest ongoing sources of emissions have not been nearly enough.

According to the study, most efforts in the U.S. have focused on eliminating legacy sources and remediating other major sources such as highly contaminated sites.

In addition, it noted that PCB-containing paint is responsible for up to 7 percent of such emissions and could be further regulated. The PCBs are inadvertently produced during the manufacturing of paint pigments, it said.

This is a large concern for Keri Hornbuckle, one of the co-authors of the study and a professor of civil and environmental engineering at the University of Iowa.

”PCBs are being produced by accident and being distributed in products for our children, like Play-Doh, for example,” said Hornbuckle.

The PCBs get produced as accidental byproduct when certain pigments are chemically manufactured, according to Hornbuckle.

“This is a preventable process, but it’s more expensive than the method that produces small amounts of PCBs retained in the pigments,” says Hornbuckle.

Hornbuckle said she fears that more children will become exposed before legal action is taken against the manufacturers.

But will new legislation bring about all the necessary changes?

Spak said, “It’s a lot more complicated than what the [Environmental Protection] Administration has described.”

Spak points to the 1980 federal Superfund law that provided funding towards cleaning up many contaminated sites. The EPA’s website provides an active list of sites that have been cleaned up, or are proposed to be.

The study was the first such comprehensive inventory of PCB emissions on an urban scale in the United States. A previous study in Toronto found similar results.

According to the study, the inventory for Chicago is consistent with estimates of stocks and emissions for Toronto, a city of similar age, geographic area, total population and population density.

The findings raise questions about other urban areas and whether enough is being done to eliminate PCB emissions as a whole, Spak said.

“We know that electrical sites and transformers are not the whole story and we expect to find that in similar reports from other cities.”

The study called for “a comprehensive, rational planning framework for managing all PCB emissions from dispersed sources.”

The study appeared in the journal Environmental Science & Technology.