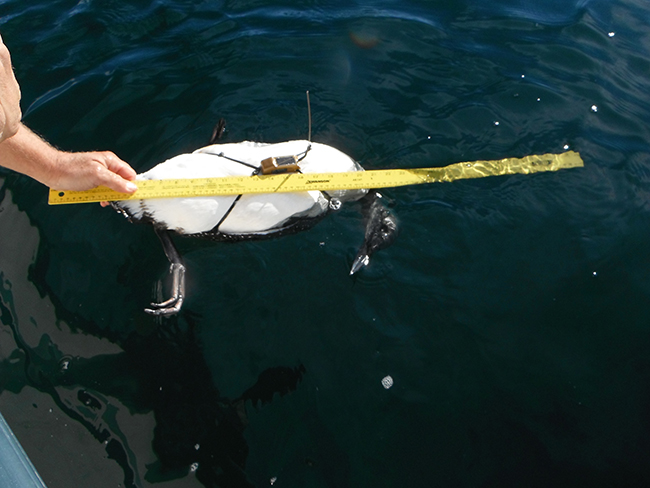 Using satellites to follow dead birds drifting on Lake Michigan may hold the key to locating the source of the elusive botulinum toxin, which causes paralysis and death in birds.

To track down where waterbirds might be exposed to the toxin, a recent study published in the Journal of Great Lakes Research developed a model of how loon carcasses drift using an approach similar to that of search-and-rescue operations, said Jennifer Chipault, a wildlife biologist for the U.S. Geological Survey National Wildlife Health Center.

The idea stems from previous evidence that loons — the most plentiful victims of avian botulism — feed as far down as 250 feet deep. That suggests the birds may be contracting the toxin further offshore than originally thought.

The carcass drift model provides an opportunity to focus on where toxin production is likely occurring or where it is being transferred to the birds, lead author and USGS research wildlife biologist Kevin Kenow said.

Information for the model was gathered from satellite transmitters and GPS devices that the researchers attached to loon carcasses that were collected by the state of Minnesota, he said.

“We put those carcasses out in Lake Michigan and allowed them to drift for several days,” Kenow said. “The location data was beamed up to the satellite, and then we also retrieved the carcasses and our equipment.”

Next, the model was used to backtrack the carcasses of non-radiomarked birds that had died from botulism and washed ashore. It used the wind, wave and current conditions to identify the paths they drifted, he said.

The gene that produces the botulism toxin is fairly widespread, but not in high concentrations, said Stephen Riley, a USGS research fishery biologist.

“We had very few places where we called them hotspots, and those kind of places are where we think the birds would ultimately be getting the toxin from,” he said.

“Outbreaks have become somewhat more common lately,” Riley said. “They’re finding more dead birds than they used to for a while.”

One reason may be because of the increasing growth of cladophora, an algae native to the Great Lakes, the researchers said. The increase is due to invasive mussels, like quagga mussels, that attach to the sand and provide a hard surface for the algae to attach, Riley said. Mussels also clear the water, allowing light to penetrate more deeply. That lets the algae to grow deeper than it used to.

And the mussels excrete soluble phosphorus that fertilizes the algae.

“Sometimes there will be like three or four feet of this algae waving around in the current,” Riley said. “At some point in the summer it gets weak because it’s grown so much, and storms can peel it off the rocks or the mussel beds, and it ends up settling somewhere and then starts to rot.”

The bacterium that produces the botulinum toxin requires conditions with absolutely no oxygen. The researchers think the settling and rotting of the algae forms these conditions. Storms may stir up the algae, releasing the toxin where it will be taken up by bugs scavenging in the algae.

Fish eat the bugs and birds eat the fish.

“That’s what we think is happening,” Riley said. “But we don’t know where is the problem.”

Once that’s solved, actually addressing the issue depends on the source of the toxin production or its pathways up the food chain, Kenow said.

“Is there something specific that can be done to eliminate the conditions for toxin production in those areas?” he said. “Is there perhaps something going on at that site that could be interrupted somehow? Or, is it a really focal site where you might engage in trying to disturb and disperse birds away from that area so they aren’t exposed to the toxin?”

In the Sleeping Bear Dunes alone, 500 to 600 loons died from botulism in 2012. Around 300 of those deaths were concentrated in one week in October, Riley said. There are only 10,000 to 15,000 breeding pairs of loons in the Great Lakes states, so if this happens every year, it could become a significant cause of death.

The 2012 die-off concerned the National Park Service which has been monitoring bird carcasses with the Geological Survey, said Brenda Lafrancois, a regional aquatic ecologist for the Park Service. The agencies coordinated about a dozen volunteers, each responsible for reporting or sending in bird carcasses found on a section of the beach at Sleeping Bear.

“Botulism is probably the single biggest killer of wild birds in the world,” Riley said. Some studies say up to a million birds a year die from it. 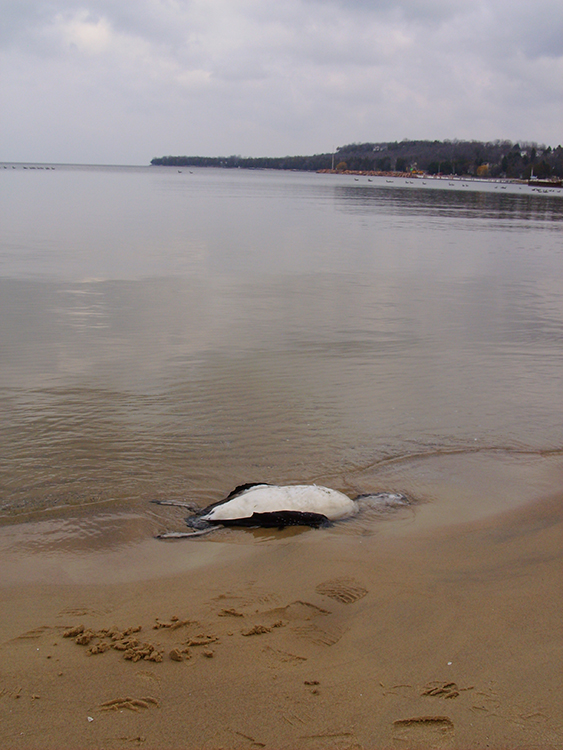 A loon washed up on the Lake Michigan shoreline in Door County, Wisconsin. Image: Jenny Chipault

The toxin can kill people in doses measured in nanograms, which are millionths of a gram, he said. Typically it has to be ingested to kill.

It’s also possible for the toxin to enter the system via the eyes or a cut in the skin, said Chipault, who encourages people to report dead birds on beaches to their local natural resources agency.

If loons are contracting the toxin in 150 feet of water, which is about 10 miles offshore, people are unlikely to encounter it swimming, Riley said.

The bigger danger would be if people poke around at a dead bird on the beach and then accidentally touched their mouths, which is improbable, he said. Dogs can get sick or die if they pick up the birds.

“The fish you eat probably aren’t going to have it either, because it’s more likely to occur in the small forage fish that eat bugs rather than the game fish that are eating other fish,” Riley said.

And the affected fish die pretty quickly, he said. If you catch one, it’ll be obviously sick-looking, and you’re probably not going to want to eat it.

“You’ll see birds that can’t control their inner eyelids, or can’t keep their heads up, or can’t walk or can’t fly.”