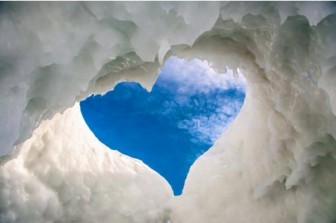 When Lake Michigan’s water froze, it created an ice cave and this heart-shaped opening, which was snapped by Greg Raniszewski and appeared on the Earth Sciences Picture of the Day, a service of the Universities Space Research Association.

If big waves hit the lake’s shores and are met with long periods of cold temperatures, these caves are likely to form, according to that post. The picture was taken last year near Grand Island, Michigan.

The heart gets its shape from melted ice that sculpted the cave’s barrier. The altocumulus clouds, seen within the opening, rest anywhere from 6,500 to 20,000 feet in the sky.