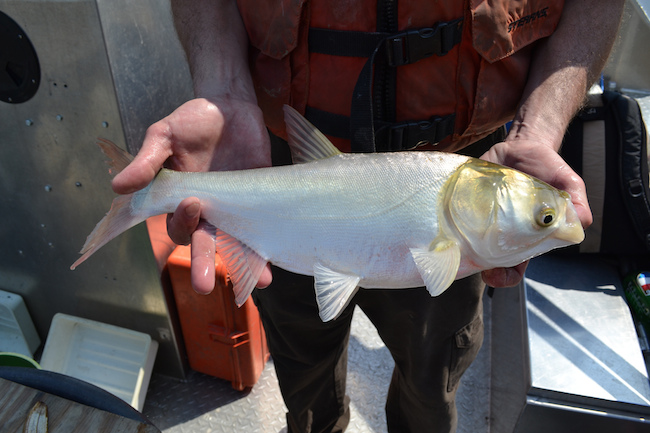 A new study suggests that Asian carp would disrupt the food web and decimate native species like walleye if they invade Lake Erie.

And that could blunt the economic impact of anglers on nearby communities. A Michigan State University researcher plans to compare the study’s predicted changes in fish abundance with the impact of food web changes on the number of fishing trips taken in the region.

By outeating native fish, they comprise 80 to 90 percent of the total fish weight in parts of the Illinois and Mississippi rivers, said study author and food web modeler Hongyan Zhang.

So far a $300 million federal effort has blocked silver and bighead carp from doing that to Lake Erie. But invasion is “still a big concern because one-third of Lake Erie’s total biomass would be Asian carp,” Zhang said.

The study, published in the Transactions of the American Fisheries Society, measures the potential impacts of silver and bighead carp invasion by using almost 500 computer simulations.

The model relies on existing predator-prey relationships across the Lake Erie basin and incorporates carp data from already invaded areas.

Researchers evaluated “what would happen if [carp] got into Lake Erie, how big their population would grow, what they would eat and what fishes would eat them,” said fisheries biologist and co-author Ed Rutherford.

Lake Erie is the shallowest and warmest of the Great Lakes. It’s also the most productive, meaning a constant influx of nutrients like phosphorous promote plankton growth — and harmful algal blooms.

Asian carp would likely be more abundant in Lake Erie than any other Great Lake if they entered the system, said Rutherford, who works at the National Oceanic and Atmospheric Administration’s Great Lakes Environmental Research Laboratory in Ann Arbor.

Even during a massive algal bloom, silver carp would thrive, targeting and feeding on surface water algae but not suppressing it, he said.

Silver and bighead carp would wreak havoc on the current ecosystem, he said.

Invasive carp could reach 34 percent of the total fish weight. That’s twice as much as gizzard shad, the most common plankton-eating fish in the lake today.

Shad and other fish that eat zooplankton and algae would sharply decline as the carp ate up much of their food. ­And the impact cascades. These fish, including alewife and shiner, are important food for gamefish like walleye and perch.

But other native fish could benefit from a carp invasion, researchers found.

Young Asian carp could provide more food for fish-eating fish like smallmouth bass, which could see its population increase by as much as 15 percent, the study reports.

Even more surprising is the predicted effect of carp on yellow perch, Rutherford said.

“Yellow perch eat plankton when they’re young and start eating fish after age 3. So, they’d likely be affected negatively early in life and positively later in life,” he said.

Not only would young Asian carp provide  food for yellow perch, but they significantly reduce the white perch that eat them. After weighing all those factors, the model predicts a modest 5percent increase in yellow perch.

While significant, the predicted changes in native fish populations are not as severe as in other places like the Illinois and Mississippi rivers.

“In Lake Erie, relative to the rivers, there are more predators that can feed on Asian carp, which may help keep the population size down a bit,” Rutherford said.

To further investigate potential Asian carp impacts on other food webs, researchers are developing models for lakes Michigan, Huron and Ontario, as well as models for Muskegon Lake and Green Bay.

Changes in fish abundance will also be translated into economic impacts.

“We know roughly how anglers respond to changes in the fish population,” said Frank Lupi, a natural resources economist at Michigan State.

“In scenarios where species abundance doesn’t change much, there likely won’t be a big impact to the fishery,” Lupi said. “But the economic impacts for this assessment will be driven primarily by changes in key game and commercial fish, like yellow perch and walleye.”

The economic assessment will not consider carp’s effect on non-game fishing or coastal property aesthetics in Lake Erie.

One thought on “Ecological casualties: winners and losers in the war on carp”