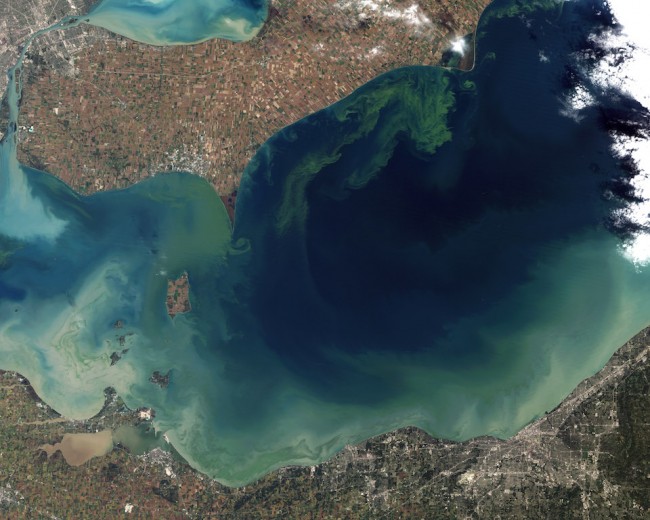 The Great Lakes Commission (GLC), a multi-state agency that promotes the use, development and conservation of Great Lakes resources, hopes to implement water quality trading in the western basin of Lake Erie over the next three years.

The U.S. Department of Agriculture granted $400,000 to the commission to test the approach, said Victoria Pebbles, the program director for the commission that is based in Ann Arbor, Michigan.

Water quality trading helps point sources – companies such as power plants or factories that release pollutants into the lake – reduce the cost of meeting nutrient run-off regulations, Pebbles said. Instead of paying for lengthy improvement projects that involve installing equipment, companies can work with farmers to reduce pollution.

The use of fertilizer and manure on farms leads to water pollution, says a Great Lakes Commission report.  High levels of such nutrients could damage Lake Erie – too much phosphorus causes harmful algal blooms.

These blooms make water unsafe for drinking and harmful to fish. A toxic bloom in 2014 left more than 400,000 residents in the Toledo area without access to public drinking water for two days.

Last year, a bloom in Lake Erie lasted from July to September and was the worst of the century, according to the National Oceanic and Atmospheric Administration.

It’s a significant problem because more than 11 million people rely on Lake Erie for drinking water and the lake supports a $1.5 billion sport fishing industry, according to the commission’s report.

Under the trading system, farmers receive credits for reducing runoff into Lake Erie. These credits can be bought by other sources of pollution — called point sources – that need to reduce their own pollution. Point sources could be sewage treatment plants, power plants or factories that can use credits to fulfill pollution regulations without having to reduce their pollution directly.

The initiative has other environmental benefits. When farmers construct a wetland or reduce runoff in other ways, they could also be providing habitat for plants and animals or decreasing the chance of a flood.

“You get all these other benefits that really are just part of putting in a conservation practice, but the buyer isn’t paying for [them],” Pebbles said.

“In other trading programs around the country, trading has proven to provide a more cost effective solution,” Pebbles said.

The initiative in the Ohio River basin is headed by the Electric Power Research Institute (EPRI) and already involves at least 30 farms. It has proven to be a reliable and viable tool, said Chris Mahoney, the communications manager for EPRI.

American Electric Power, Duke Energy and Hoosier Energy were the first point sources to buy into that program.  Credits used for the initiative equate to one pound of total nitrogen, or one pound of total phosphorus, said Jessica Fox, a project manager at EPRI.

EPRI has been conducting research regarding pollution and environmental markets for many years, and the Ohio River basin initiative will test whether market-based trading can be used to improve water quality.

So far, so good, according to institute officials. Water quality trading is important ecologically and economically and is a great “alternative to installing less effective, more expensive technology,” said Mahoney.

The project is the first and only interstate water trading program, and led EPRI to win the 2015 United States Water Prize for outstanding solutions to national water challenges.

There is “no sense in us reinventing the wheel,” Pebbles said.  “We will look at what they’ve done in that program and try to transfer whatever we can to the western Lake Erie basin.”

Water quality trading has raised some eyebrows though. The method has had mixed results in the past and circumstances need to be prime for everything to come together, said James Clift, the policy director for the Michigan Environmental Council.

“If you look at the worst scenario, we had California kind of get into a trading program for a while for carbon emissions from the air,” Clift said. “The problem is that they created so many credits, people ended up actually buying them and disconnecting pollution control equipment they had already put on plans.”

Another potential concern is the “local impact of having too much [pollution] come from a limited number of sources, because they’ve bought up everyone else’s credits,” he said. The only hope is that the water would dilute it, but it could cause a localized problem.

Both of these concerns are addressed by the program, Fox said.  Point sources are limited in how much they can use trading.  Facilities cannot use trading to offset all of their regulation requirements.

While the success of a water trading program is not guaranteed, it could help improve the water in Lake Erie, said Pebbles. The project will determine if it is effective.

“The bottom line is that what we’re doing isn’t working,” Pebbles said. “ We need to try a variety of different tools to see if we can make these improvements in western Lake Erie.

“There are at least a dozen other initiatives underway to try to improve the situation there.”

Planning is underway and the project is expected to begin soon, Pebbles said.

3 thoughts on “Harnessing a market for Lake Erie water quality”