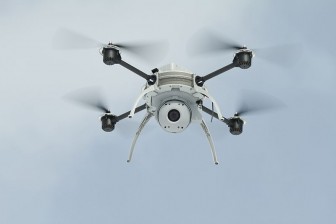 State Police say that drones similar to this one are more efficient at collecting data and photographing entire scenes of incidents. Image: Creative Commons

Drones on retail shelves for the upcoming holiday season or bomb unsuspecting civilians in war zones get lots of media attention, but Michigan’s Aeryon SkyRanger flies below the public attention radar.

It’s a remotely operated aircraft system, belonging to the State Police, that the Federal Aviation Administration approved for use anywhere in Michigan.

But does Michigan need it? Would a future sky full of drones help Michigan residents feel safe?

Deploying the Aeryon SkyRanger comes with many advantages, according to the State Police.

“I definitely think we need it because data’s more efficient in the job that we’re doing,” said 1st Lt. Chris Bush, commander of field support and aviation for the State Police. “It gives us a different tool in our tool bag that we can use.”

One is its maneuverability in difficult situations to photograph the whole scene of incidents, from vehicle crash sites to other emergencies. The drone can significantly reduce the time responders need to survey an area, according to Bush.

Traditional methods put officers in roadways for several hours next to speeding vehicles, but a drone can take the photographs necessary to collect data in 15 to 20 minutes, he said.

“At any serious crash or fatal accident, we’re trying to figure out a cause, and based on some of the photographs we can figure out speeds,” Bush said. “It gives a totally different view of the scene, with skid marks and the placement of other vehicles. So it helps us out in prosecution and civil cases.”

Earlier this year, the Aeryon SkyRanger was used to fly above a burning house in Ottawa County, collecting both video and photographs.

“We equipped the drone with a smart camera to show where there were hot spots in the fire,” Bush said. The fire department can then focus on those areas to make sure a fire doesn’t reignite.

The drone was purchased in 2013 for $160,000 with a federal Homeland Security Department grant. It flies up to 31 miles an hour, travels for 50 minutes on a single battery charge and can withstand winds upwards of 40 miles per hour, according to the State Police.

The Department of Transportation (MDOT) conducted an 18-month study that ended in April on the viability of using drones for highway research. The department found that drones, equipped with infrared sensing technology, can detect weak spots lurking underneath the concrete or asphalt surface of a road or bridge.

By hovering infrared sensing drones just 20 feet above the road, the department can prevent problems, like potholes, from occurring, said Steve Cook, engineer of operations and maintenance for MDOT.

“There are two really good reasons why MDOT would want to go down the path of using drones, and number one is safety. People aren’t in harm’s way of being in traffic,” Cook said.

“Number two is mobility,” he added. “It certainly helps us avoid putting any work zones out there under certain conditions and having traffic pushed down into one lane.”

MDOT will start the second phase of its research in March, Cook says. That two-year project will focus on data collected from drones and infrared sensing and compare it to traditional data collection methods.

MDOT owns one drone, the Bergen Hexacopter, manufactured in Cass County. The drone retails for $5,000.

“We’ve seen reports across the country where individuals have tried to fly drones over a prison into a yard area where prisoners congregate,” said Chris Gautz, public information officer for the Department of Corrections.

“In addition to introducing contraband, another issue is that people are using them for surveillance — looking at how the prison operates and trying to find a weak point,” Gautz said.

Instances of drones delivering illegal items to prison inmates have been reported in Oklahoma, Maryland and Ohio.

“We’re not aware of anything going on in Michigan yet, but it doesn’t mean that we’re waiting for it to happen before we get involved,” Gautz said of Michigan’s 32 prison facilities. The department is considering using anti-drone technology and weaving it into its training regimen, which recently added drone sighting awareness.

So far, the department’s plan of action is to detect an unauthorized drone before it reaches a prison’s walls and track it back to its user. Or the state can disable the drone, sometimes by shooting it down. But if a drone is shot down above prison property, inmates can pick up debris and use it as weapons, according to Gautz.

When asked whether drones could be used to assist in any correctional operations, Gautz said ones with thermal imaging cameras would be helpful if an escapee ran into a wooded area.

“That purpose is something we can utilize down the road,” he said.

“It’s a hot topic if you go to conventions or conferences, nationally or statewide,” Gautz said. “When people get together in the corrections industry, no matter where they are, drones are probably one of the top things that comes up right now.

“It’s the topic of choice.”

The House Criminal Justice Committee is considering legislation that would establish “no fly” zones for drones. The proposal would make it illegal for drones to operate within 1,500 feet of any state prison or county jail, except for those used by law enforcement agencies. A Senate bill would ban drones from operating in the airspace above the Capitol.

The legislation is under discussion in committees.

So far, 26 states have regulations for drone activity. Michigan and Illinois are the only ones in the Great Lakes region, according to the National Conference of State Legislatures.

Michigan has two laws that deal with drones. They make it illegal for drones to interfere with hunters or for a drone to take game.