Three-quarters of eighth grade students in the U.S. aren’t proficient in geography and their test scores have shown no improvement since 1994, according to a new report by the General Accountability Office (GAO), an investigatory arm of Congress.

One reason is middle school geography has an image problem: the stereotype of students coloring in maps and labeling state capitals.

And that often leads people to ask, “What are you going to do with that?” said Benjamin Ofori-Amoah, chair of the Geography Department at Western Michigan University.

Ofori-Amoah said the study of geography in middle school and beyond goes further than finding places on a globe, but many people don’t understand the importance of the subject. 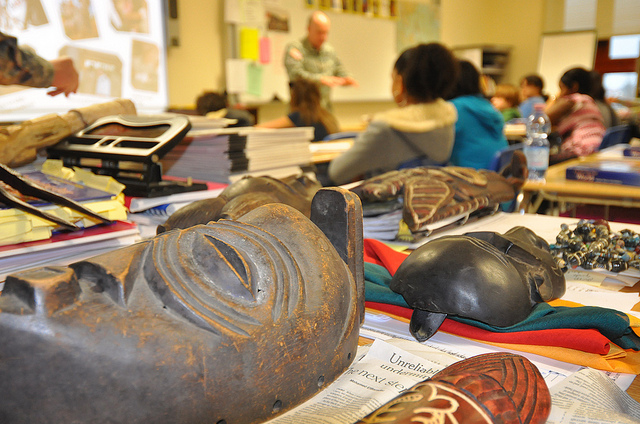 “Most of the time we get students coming into the major after they’re here and they take a couple of general education courses and they’ve realized that this is more than state names and capital cities and mountains and rivers. They are right,” Ofori-Amoah said.

He added that geography creates global awareness and aids in understanding cultural and environmental differences.

“It’s important to know about places, not place names. What we try to understand is places and who is living in those places and how they interact with their environment,” said Ofori-Amoah. “You need to get a good foundation and then grow it.”

The GAO report and some educators say Common Core Standards for schools put the focus on math and English language arts, leaving subjects like geography behind.

However, Bill DiSessa of the communications office at the Michigan Department of Education said it’s useless to criticize Common Core. It was designed to be limited.

The department recently proposed a revised set of social studies standards, DiSessa said, which were sent to the State Board of Education and revised further by an external committee. They were created along the lines of the national College, Career and Civic Life Framework for Social Studies State Standards.

Along with geography, social studies will still include history, economics, civics and government. For grades five through eight, geography will cover the world in spatial terms, which refers to understanding where things happen, places and regions, environment and society, human systems, physical systems and global issues – whether alone or embedded in history lessons.

“We believe that the updated standards, along with improved instructional practices in social studies, will promote better outcomes for students,” DiSessa said. “The proposed social studies standards are not aligned with Common Core.”

DiSessa said teachers have noted points in the social studies standards and the Common Core in which students can travel through multiple disciplines while studying a single subject.

According to the GAO report, Michigan is one of only six states with a statewide middle school and high school requirement for geography, a policy that the Michigan Geographic Alliance helped institute, said Michael Libbee, co-coordinator of the alliance and a geography professor at Central Michigan University.

The alliance works with the Education Department to provide professional, long-term development for teachers with in-service workshops as well as creating learning tools for students.

Libbee said it’s about to publish a book for third-graders based on the book by explorer Alexander Henry, who was captured by Native Americans in Michigan in the late 1700s. Libbee said products like that help implement a common core standard – English language arts – while developing diverse geography skills.

Henry was a fur trader and writer who explored the Great Lakes region, Great Plains and Pacific Northwest in the United States and Canada.

Despite the state’s geography education requirements, students still enter high school and college with less preparation than if there were more focus the subject, Libbee said.

“Our belief is that improving the quality of geography education proves to be intensive work. We tend to focus on middle schools and work there to help teachers do a better job in trying times,” Libbee said. “But incidentally, students are coming from middle school with very little geographic background.”

Mandi Zaborowski, principal of Gladwin Junior High School in Gladwin, said she could not think of a more important subject than geography for her middle-school students.

In addition to students learning about location and direction in the U.S. and the rest of the world, she said geography helps students understand other cultures, religions, economies and environments and how people interact differently with them.

In social studies, like with all other subjects in school, Zaborowski said it is essential for students to mesh different types of learning, like the involvement of history and economics in geography.

“We try to intertwine all the concepts we teach the kids,” Zaborowski said. “The more students can develop the path of how everything is related, the better chance that students are going to be able to understand material in the long term and use it better.”

One thought on “Don’t know much geography”