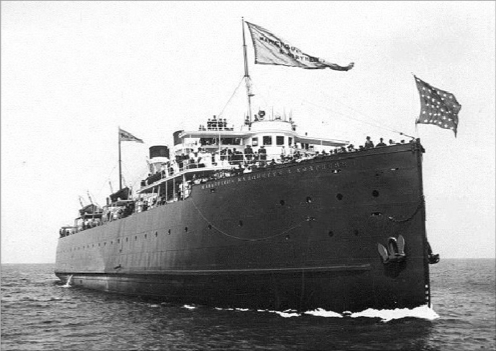 The “Milwaukee” in the Great Lakes. Image: U.S. Department of the Interior, National Register of Historic Places

Nearly 86 years after the steam screw ferry Milwaukee sank in Lake Michigan, the National Register of Historic Places has recognized the ship for its distinctive role in the Great lakes railcar ferry system.

A description of the sinking notes that on Oct. 22, 1929, a powerful storm blew into the Great Lakes region. Gales topping 35 miles per hour took down the Milwaukee, along with more than 40 crew members, according to documents submitted to the National Register.

Archaeologist Tamara Thomsen and her colleague, Caitlin Zant, applied for the Milwaukee to be on the National Register on behalf of Wisconsin’s State Preservation Office.

Thomsen and Zant dove for three years, collecting images and videos of the archaeological data concerning construction of the ship and the artifacts that remain on the lake bottom.

Registering the Milwaukee “provides a federal level of protection against damage as part of the preservation method,” Thomsen said. And getting that protection was important because the Milwaukee is a “heritage site, burial site, archaeological site and time capsule.”

As a pioneer of the cross-lake railcar ferry system, the Milwaukee not only contributed to an important time in history, but also displayed the design and operation of a steam screw vessel, according to the National Register.

The system facilitated rapid expansion of industry, according to the application for the designation. That allowed resource-rich settlements of the Northwest Territory and industrial centers of the Atlantic shore to reach each other more quickly.

Thomsen said the Milwaukee “is indicative of the railroad industry. The Milwaukee takes the history to the bottom.”

The reason and location where the Milwaukee sank remained a mystery until 1972 when a few anglers accidentally discovered it, according to the application. They reported snagging their nets on an obstruction at the bottom of Lake Michigan.

According to the U.S. National Park Service, divers Kent Bellrichard and John Steele found the ship 120 feet below the surface and three miles east of Fox Point, Wisconsin.

Maritime historians note that ferries such as the Milwaukee were built with low-slung decks and rail tracks, allowing groups of railcars to be rolled directly onto the vessel.

The Milwaukee was traveling from Grand Haven, Michigan, to Milwaukee, Wisconsin, with 28 railcars on the afternoon it sank.

The captain of the steamer Puritan, also caught in the storm, reported that “it was the worst storm he’d seen in 30 years.”

The foundering of the Milwaukee was the worst car ferry disaster in Great Lakes history, according to the National Register.

For that reason, along with its encounter with the storm and the half-century mystery as to where it sank, it’s remained a popular subject in Great Lakes maritime history.

A note written by crew member A.R. Sidon gave investigators a lead as to why it sank: “The ship is making water fast. We have turned around and headed for Milwaukee. Pumps are working but sea gate is bent in and can’t keep the water out. Flicker is flooded. Seas are tremendous. Things look bad. Our roll is about the same as on last pay day.”

Since its discovery, the Milwaukee has drawn a lot of attention to Great Lakes shipwrecks, according to Thomsen.

The site is popular for recreational scuba diving, in part because of its proximity to Chicago and Milwaukee. The ship is the second-most popular dive shipwreck in Wisconsin, Thomsen said.

The vessel is one of several Wisconsin Great Lakes shipwrecks recently recognized by the National Register of Historic Places. Others are: