No, it’s not a science fiction nightmare.

That’s what is happening to Mount Baldy, the largest moving sand dune on the southern shore of Lake Michigan. And it’s happening for reasons that include changing water levels, storms and higher-than-normal water and air temperatures, according to a recent study by researchers from Indiana University Northwest in Gary and Openlands, a Chicago-area conservation group.

“Monitoring rates of dune migration provide valuable information on the dynamics of the aeolian (wind-related) system and its response to natural–climate-induced–and anthropogenic–human induced–stressors,” Zoran Kilibarda and Craig Shillinglaw wrote in their study based on historic aerial photos from Indiana Dunes National Lakeshore adjacent to Michigan City, Indiana.

The national park runs for 15 miles along the southern shore of Lake Michigan and draws an average of 1.6 million to 1.8 million visitors annually.

According to the National Park Service, which operates the lakeshore, half-buried trees on the mega-dune’s southern slope attest to its movement. “Without vegetation to hold the sand, Mount Baldy will continue its deliberate march inland,” the agency says.

But Zilibarda, a geoscientist who has been studying Mount Baldy and dunes on the Michigan side of the lake for the past 10 years, is skeptical about the wisdom of the agency’s efforts to plant grasses on Mount Baldy to stabilize it. 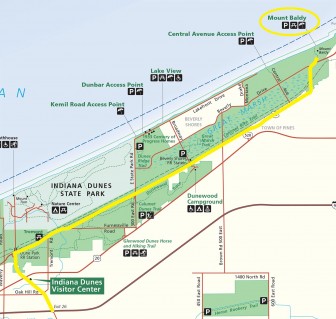 “They should have let the dune fight its own way by natural adjustment,” Zilibarda said. “If Baldy is totally vegetated, it won’t be a dune as it used to be, and I don’t think it would have any special attractiveness. It’s much more interesting for people who enjoy walking through the barren sand rather than walking through the forest.”

As for human impact, Kilibarda and Shillinglaw wrote, “Development of settlements and harbors along the southern shores of Lake Michigan altered natural coastal processes and interactions between beaches and nearby aeolian dunes.”

People began interfering with the natural movement of the dunes at least as early as 1836 by constructing piers at the Trail’s Creek entrance to Lake Michigan, the study said. In 1885, the Michigan City harbor was built, followed in 1889 by construction of a breakwater.

The park’s Supervisory Ranger Bruce Rowe said the breakwater “started a period of sand starvation” that lasted about a century and a half by interfering with the longshore currents that naturally carried sand to the beach.

A second type of human impact also has accelerated the dune’s movement, Lowe said. Even before Indiana Dunes became a national park in 1966, visitors hiking on Mount Baldy killed many of the plants whose roots had helped stabilize it. 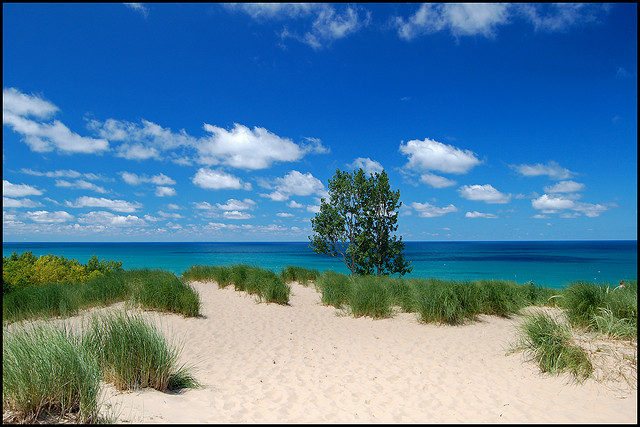 The National Park Service closed Mount Baldy’s trail to the general public about two years ago after a young boy fell into a hole and was buried in sand for 3½ hours, Rowe said. The boy survived, and the Environmental Protection Agency used ground-sensing radar to investigate the cause of the collapse.

This year the park is allowing some “carefully controlled ranger-led hikes” along part of Mount Baldy for groups of no more than 30 people, Rowe said. For safety, a ranger walks at the front of the group and a volunteer walks at the back.

The Kilibarda and Shillinglaw study looked at changes during 10 time intervals spanning 1938 through 2008, each interval characterized by different environmental factors and varying rates of dune migration and beach erosion.

For example, changes from 1938-1951 are linked to rising water levels in Lake Michigan and strong storms, including the November 1940 Armistice Day storm with 60 mph gusts that destroyed five major ships on the lake. The same period was marked by a growing number of strong winter cyclones, the study said.

During the next interval from 1951 through 1958, the lake level fell, exposing more beach, while precipitation was below the long-term average.

Mount Baldy was unusually active between 1965 and 1973, the study said, moving an average of almost 11 feet per year. More frequent storms and rising lake levels marked that period.

Since 2007, the researchers have been gathering real-time data from 13 measuring stations around the base of the dune, a more precise means of assessment than aerial photos, Kilibarda said.

In most years since then, the measuring stations show Mount Baldy moving inland even faster, a situation Kilibarda attributes in large part to weather extremes tied to climate change.

“The intensity of storms is the main reason for these more rapid rates of movement,” he said.

And if winters become milder, ice won’t stay on the lake as long and the high winds of fall and winter will make the dunes more active by “pushing sand year-round without any slowdown,” he said.

The beach has been replenished periodically.

The Park Service’s Rowe said the Army Corps of Engineers has done so about a half-dozen times during the history of the park, sometimes trucking in sand. On other occasions the corps pumped sand dredged from the Michigan City harbor onto a barge and dumped it in the lake in front of Mount Baldy to let the waves wash the sand ashore.

The study said, “There is little doubt that nourishment of almost 1.5 million tons of sand and gravel between 1973 and 2008 helped diminish rates of beach erosion. The migration rate for Mount Baldy also slowed in what the researchers called the “post-nourishment period.”

But Kilibarda is also critical of the sand replenishment efforts.

“Nourishment is just, in my opinion, a waste of resources and money because it doesn’t do anything long-run and doesn’t let the dunes naturally adjust to man-made conditions,” he said. “If you let them adjust naturally, there would be some solution, even if it’s at the cost of burying the parking lot.”

The study, “A 70 Year History of Coastal Dune Migration and Beach Erosion along the Southern Shore of Lake Michigan,” appeared in the journal “Aeolian Research.”