Researchers have identified a gene that for the first time links the decline of lake trout to their primary food source — the invasive alewife.

The gene produces an enzyme that breaks down a nutrient — vitamin B1 — essential for trout development. The discovery comes after nearly two decades of research and answers a management question that could help put lake trout back at the top of the Great Lakes food chain. 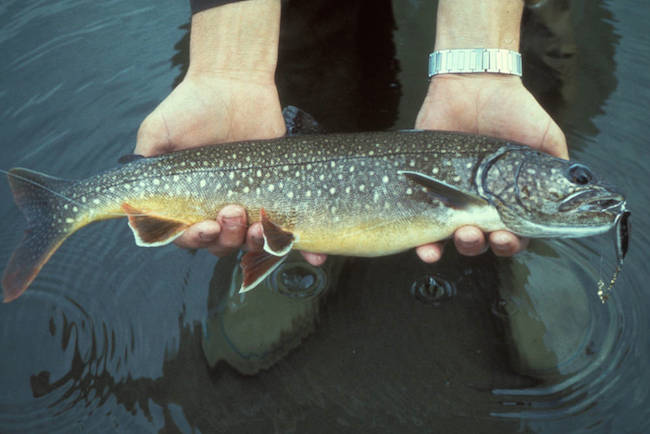 Vitamin B1 deficiency is one of a handful of factors limiting natural trout populations in the Great Lakes. Linking it to the trout’s primary food source is an important advance, researchers say.

“This is the first time any multicellular organism has been found to produce thiaminase, which degrades thiamine, or vitamin B1,” said Allison Evans, a fisheries biologist at Oregon State University.

“Before this work only bacteria were known to produce it,” she said.

Other Great Lakes fishes, including bullhead, common carp and rainbow smelt are known to contain thiaminase, but researchers weren’t sure how they got it — until now.

While historically dominant in the Great Lakes, lake trout were decimated by overfishing in the 1950s. And with no top predator, invasive alewife numbers grew unchecked and eventually outcompeted local fish, including bloater.

“We’ve been stocking lake trout in the lakes, and in theory they should grow, become adults and reproduce. But that’s not happened,” said Scott Heppell, the study’s lead investigator and a fisheries ecologist at Oregon State University.

Female trout lay eggs, but the embryos lack a viable food source and die, he said.

“The main problem’s been that young lake trout, embryos and juvenile fish, have potential to mature, but when adult females lay eggs, they cannot package enough vitamin B in the yolk,” Evans said.

Knowing that alewives are the culprit changes the game for managing lake trout. Not only do alewives have thiaminase, they produce it.

Researchers followed three lines of evidence before finding the source of the enzyme.

Initially, they considered the lower-level aquatic food sources, including zooplankton and mussels. But it seemed more likely that bacteria — a known source of the enzyme — in the gut of alewife could produce thiaminase.

In 2012, Evans was among the scientists who disproved this hypothesis, placing them one step closer to the gene discovery made earlier this year.

“We were in the scientific process of figuring out what it wasn’t,” Heppell said.

Researchers figured if it wasn’t plankton and it wasn’t bacteria, clues would lead to a gene in the fish that produces it. They converged on the answer from separate approaches.

Then they matched their observations with genome-crunching computer datasets, she said. 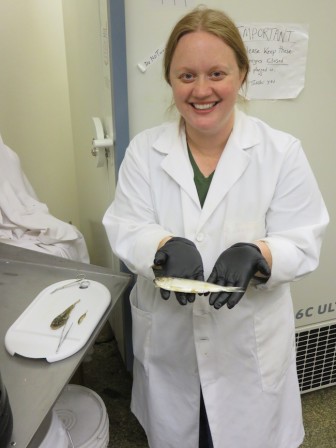 Researcher Allison Evans prepares to dissect an alewife in order to extract proteins for investigation as part of the project. Image: Oregon State University

The first results showed that the vitamin B1-breaking enzyme was functional in alewife, carp, zebrafish and zebra mussels, but it acted different from one species to the next.

A group in Japan sequenced a small piece of the thiaminase enzyme from a marine fish. This helped confirm that fish produced the enzyme themselves.

“We found a gene similar to this in zebrafish, something we found only because the fish’s entire genome is synthesized,” said Evans.

While not found in the Great Lakes, zebrafish are model organisms for fisheries research. Their development can be observed and manipulated because of the existence of a detailed map of their entire genome.

Once scientists located the gene, they inserted it into a bacterium that does not produce the unhealthy enzyme. When inserted, the bacteria produced the enzyme. When removed it did not.

The story’s a little more difficult with alewife, scientists said.

“We couldn’t use the modern method because the alewife genome is not synthesized, but we found a candidate gene,” said Evans.

That candidate gene is expected to act similar to the one in zebrafish that produces thiaminase, but scientists are continuing the work with alewife and other species.

“This is fascinating,” Heppell said. “We used zebrafish as a model to prove the concept that fish in fact can produce the enzyme themselves.”

A key question that remains: Why would a fish produce an enzyme that breaks down a nutrient essential for their survival?

That answer remains elusive, but Heppell says what’s been discovered so far is important information for improving the fate of lake trout.

“We’re considering how to control access to alewives and are already stocking lake trout near offshore reefs where alewife are less likely to occur,” he said.

The findings come at a good time: alewife numbers are down and healthy native food choices like bloater are being restored across the Great Lakes.