In the aftermath of the 2010 Kalamazoo River oil spill, environmental groups have been calling on Michigan to pay attention to a different Enbridge pipeline system: the one running beneath the Straits of Mackinac.

When you think of the oil boom in the U.S., Michigan might not be the first state that comes to mind.

But while the state is no North Dakota, that oil is making its way to the state, traveling through an underground network of pipelines.

Those pipelines became the center of attention when one owned by the Canadian company Enbridge leaked hundreds of thousands of gallons of crude oil into the Kalamazoo River in 2010.

After that spill, environmentalists turned their sights to another Michigan pipeline — or two pipelines to be exact. 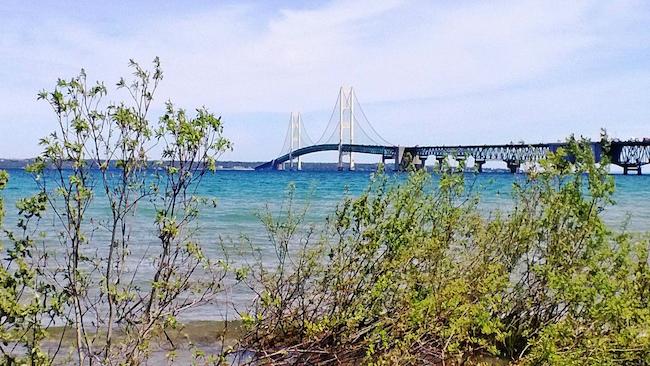 The Michigan Petroleum Pipeline Task Force is recommending a series of safety measures that may be applied to the operation of pipelines running beneath the Straits of Mackinac. Image: Kevin Lavery, WKAR

Experts say a spill there would extremely difficult to clean up and could devastate the area’s sensitive ecosystem.

Last year, the state launched a task force to take a closer look at the safety of the Line 5 system as well as petroleum pipelines around the state.

Recently the task force released a report detailing recommendations for improving the safety and monitoring of pipelines in Michigan. Current State spoke with the task force co-chair and Michigan Department of Environmental Quality director Dan Wyant.