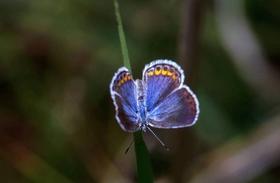 The conversation around climate change often focuses on how it will disrupt human life. Scientists warn that food shortages, flooding in coastal cities, and deadly heatwaves are just a few of the potentially devastating consequences of a warming planet. But humans aren’t the only ones at risk. Even small changes in temperature could drastically alter the native habitats of plants and animals across the globe, including here in Michigan.

Current State’s April Van Buren speaks with Chris Hoving, a climate adaptation specialist at the Michigan Department of Natural Resources, about the Karner Blue butterfly. It’s a very small, very blue butterfly that is native to the Great Lakes region, and it is one of the species that scientists are really looking to as kind of a canary in the coal mine when it comes to how animals will adapt to a warmer Earth.

This segment was produced by WKAR’s Current State and is reproduced with permission. Great Lakes Echo produced a related story in May.