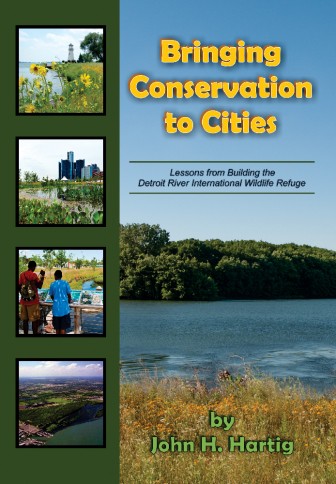 What was once considered the ultimate paradox is now setting the precedent for urban development — a wildlife refuge in Detroit.

Bringing Conservation to Cities: Lessons from Building the Detroit River International Wildlife Refuge is a new book about a public-private success story written by inland water scientist John Hartig. It traces the establishment of the country’s first international wildlife refuge.

“The next generation of conservationists will come from urban areas,” said Hartig, who is the refuge’s manager. “An area, like Detroit, with 7 million people in the combined watershed, should be engaging them.”

Conservationists seeking field experience in the pristine wilderness might have a challenge, he said. But with 80 percent of people in the United States and Canada living in urban areas, Hartig expects the “urban jungle” to provide more opportunities for conservation.

But the biggest surprise for Hartig is the transformation of the Detroit River itself.

“Who would think that the automobile capital of the U.S. and Canada could contribute anything more than a polluted river in the rust belt,” he said.

This 32-mile thoroughfare connects Lake St. Clair and the upper Great Lakes to Lake Erie. Once contaminated by urban and industrial development, the river was polluted beyond use. Chemical contaminants, oil slicks and low oxygen levels killed native fish and migrating birds.

Bald eagles, peregrine falcons and osprey have returned to the watershed. So have lake whitefish, lake sturgeon, walleye and even a few beavers.

Out of this revival came the idea for an international wildlife refuge.

“It’s not a traditional wildlife refuge, where one agency or organization controls all parts. It has breaks and barriers, public and private partnerships,” Hartig said.

In 2000, representatives from the U.S. and Canada, including former U.S. Rep. John Dingell and then-deputy prime minister of Canada, Herb Gray, met to discuss the future of the Detroit River ecosystem.

They created the binational Conservation Vision, which was signed by former U.S. president George W. Bush in 2001. 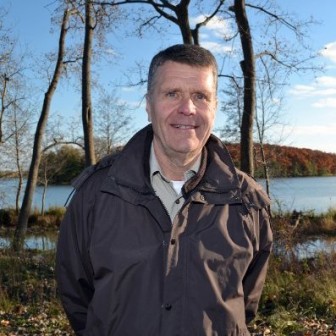 Now, more than a decade after opening the Detroit River International Wildlife Refuge, Hartig, the first manager of the refuge, champions binational and regional cooperation in his book.

“It was a different tactic. We’re going to show people the value and benefit of cooperation, which has been contributed over time and is building momentum,” he said.

“Cooperation was implicit in everything.”

The Humbug Marsh is among the cooperative successes highlighted in the book.

The Refuge’s centerpiece, it contains the last mile of natural shoreline along the U.S. side of the Detroit River and includes an important stopover for migratory birds.

Detroit-area giants Ford and GM offered foundation money to help buy the marsh, but community support and activism saw to the site’s preservation.

In another effort, Chrysler Corp. contributed 44 acres in Trenton, Michigan for construction of the Refuge’s visitor center.

Part of the Refuge Gateway, the property is Michigan’s only “Wetland of International Importance.” It once was a contaminated site that housed a Chrysler automotive brake and paint plant.

“The Refuge Gateway was this 6-foot fence with a couple feet of barbed wire that sat vacant for 15 years. Now, it’s the first project in the world to clean up an industrial brownfield sufficiently to protect the surrounding wetland,” Hartig said.

He expects a number of major cooperative acquisitions in coming years.

But Hartig argues the story isn’t just about Michigan.

It’s a 250-page testament that gives readers a look at the direction conservation is moving — to the cities.

It’s crafted for the urban conservationist but keeps the rigor of science and policy alive.

“The book provides lessons for anyone who wants to bring conservation to cities,” he said. “These are group efforts that happened because the right partnerships and relationships were in place.”

Hartig will discuss his book Wednesday at the Caroline Kennedy Library in Dearborn Heights, Michigan.

“The goal is to inspire the next generation of conservationists to believe in the power of conservation, economy and community. We need to make places for people and wildlife to get involved,” he said.