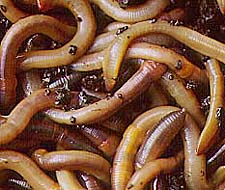 Compost box heroes, or the root of all ecological evil? Worms in Great Lakes forests are not what they seem.

Trilliums are smaller, algal blooms are more common and hummingbird populations are decreasing. All of these are made worse by non-native earthworms in Great Lakes soil.

A recent study in Ecosystems journal identified four key minerals that earthworms remove from soil and that native plants need to grow. The loss of calcium, magnesium, potassium and phosphate reduces the richness of the soil and limits what plants the soil can support.

Earthworm composting has long had a reputation of saving humans from total burial under organic material, said Jan Schultz, a botanist for the Eastern Region of the U.S. Forest Service. But earthworms cause ecological ruckus. The Great Lakes region has not had worms in its soil since the glaciers wiped them out, Schultz said. The region’s forests adapted to not need earthworms in the thousands of years since, speeding up the pace of decomposition, said Schultz.

But, introduced as a byproduct of gardening and fishing, earthworms have returned, and the pace at which they consume organic material is much too fast for Great Lakes forests to keep up. This leads to nutrient-deprived soil, which stresses “the entire forest community,” Schultz said.

But like the snowflake that started an avalanche, nutrient-depleted soil directly leads to a whole host of other problems. The minerals and nutrients consumed by invasive earthworms aid in an ecological cascade that impacts almost every aspect of Great Lakes plant and animal life.

Leaping up to take the place of waning undergrowth are invasive species like garlic mustard and buckthorn, which can grow rapidly and don’t require the nutrient concentrations native orchids and tree saplings do, said Schultz. Much of what looks like healthy forest undergrowth is actually invasive plants, Schultz said, which can be deceiving to passerby. “People see green and think green is good” said Schultz, “The entire forest community is at stake.”

Other species of invasive earthworms operate at different levels in the soil, causing mayhem in other ways.

The thinning organic layer provides less cover for budding trillium flowers, and exposes tree roots to damaging elements of nature, said Lee Frelich, director of the University of Minnesota Center for Forest Ecology. Orchids suffer, and as a result are smaller and less common, said Freilich. That creates a food shortage for hummingbirds. Populations of both decline, and more invasive species take their place.

Soybean aphids and Japanese ladybeetles, which Frelich describes as “those annoying bugs you pick off the side of your house,” both increase as well. Garlic mustard and buckthorn attract invasive and pest insects so the populations of both wedge themselves into the existing ecosystem, Frelich said.

Algal blooms can increase due to the nutrients broken down by the worms that make their way into bodies of water, Frelich said. The increase in dissolved nutrients overloads the water with minerals that help plants to grow.

The impacts of the earthworms are visible in a variety of places, said Tara L. Bal, a doctoral research assistant professor at Michigan Technological University. Soil is degraded when different levels of soil are mixed by the earthworms, and as the worms consume fallen leaves and other ground material, the roots of trees become exposed.

This tree root exposure can hurt the tree, and causes the canopy to thin and die back, said Bal. This canopy dieback is visible in the tree rings. It is possible to look at a cross section of a tree and identify roughly when worms entered the soil in that area, Bal said.

There are better indicators of which soils and forests have worms though, and some of them are odd enough to almost be funny.
One of the most common methods to sample for worms is dousing a sample area with mustard, Bal said. Mustard is a highly effective skin irritant, and spraying it on the earth causes the worms to exit the soil quickly, Bal said.

Getting rid of worms is hard, Bal said. Researchers sample them by spraying mustard on the ground which causes them to quickly leave the soil. But that system is not practical on a large scale.

So what can be done to combat the invading forces of nightcrawlers and earthworms causing such damage?

Education about how to avoid spreading worms any further, Bal said, and small measures such as washing down hiking shoes and car tires whenever traveling between areas. There are also websites, such as Great Lakes Worm Watch, that use general public submissions and reports, or ‘citizen science’, to record, observe and collect data.

If you feel inspired to help stop the insidious spread of these voracious beasts, you can start to get involved doing studies of your own here.