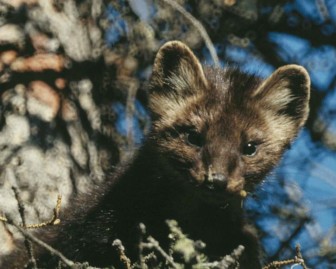 Got shrews? Or deer?

That question may be on the mind of the endangered martens in the northern Wisconsin woods, now that new research shows that shrews and deer are the most common foods in their diets.

Researchers at the University of Wisconsin in Madison and Great Lakes Indian Fish and Wildlife Commission found that shrews account for 38.6 percent and deer account for 30 percent of the prey detected in marten scat collected in the Chequamegon-Nicolet National Forest.

Scientists were surprised by the findings because studies elsewhere showed the red-backed vole to be martens’ meals of choice, said study co-author Jonathan Pauli, an assistant professor of forest and wildlife ecology at U-W. Red-backed voles topped the menu in past studies but ranked a distant third – 13.7 percent – in the new study.

“We can say unequivocally that what martens eat in Wisconsin is different from what they eat in other places,” he said.

The new findings are one indicator of the potential impact of climate change, especially variations in snow cover, on the wildlife of the Great Lakes Basin.

The marten is a member of the weasel family and the only mammal on Wisconsin’s list of state-endangered species. As a clan animal, it holds cultural significance to the Ojibwe people.

Once abundant, they were designated as endangered in 1972 and disappeared from the state in the 1990s because of large-scale fires, unregulated fur trapping and logging, according to “Potential Role of Prey in the Recovery of American Martens to Wisconsin,” published in the Journal of Wildlife Management.

In the 1970s and 1980s, the state and the U.S. Forest Service started to reintroduce the marten in the national forest “because of their economic importance as a furbearer and a growing public interest in restoring native wildlife,” the article said.

Because of its endangered status, no trapping is allowed anywhere in the state, according to James Woodford, the DNR’s natural heritage conservation section leader. However, trapping is legal in Michigan’s Upper Peninsula and northern Minnesota, and some martens have migrated to Wisconsin from those states.

In addition to shrews, white-tailed and red-backed voles, other potential prey in the area include white-footed mice, snowshoe hares, flying squirrels, ruffed grouse and red squirrels. But martens face competition for such prey from coyotes, fishers and raptors.

Martens have “high caloric demands” and can’t store large amounts of fat, the study said, so the availability of prey “is an important driver of population dynamics.”

The martens’ recovery in the state has moved slowly, the study said.

And although scientists say the survival rate of adults is sufficient to build the population, the slow pace of recovery may be due to factors involving gestation, lactation and juvenile – kit – development. Those all are times of “heightened nutritional demands” and possibly limited food supplies.

In contrast with earlier research, the study said, “Our isotopic analyses revealed that shrews, mice and squirrels, in combination with deer and grouse, were the most important diet items for martens in the autumn, constituting the majority of the assimilated diet. Voles were a relatively minor nutritional input.”

One important factor in the martens’ diet may be the easy availability of deer carcasses from vehicle collisions, winter mortality, predation and “unrecovered hunter-harvest,” the study said.

However, U-W’s Pauli cautioned that the “super-abundance” of dead deer in Wisconsin isn’t all good news for martens. There’s also a risk because those carcasses also attract fishers and coyotes, both of which prey on martens.

The study also warns that climate change may be affecting the martens’ menu.

“A regional northward range shift in northern small mammals, including red-backed voles, has recently been observed and attributed to ameliorating winter conditions from climate change,” it said. Therefore, a decline in the martens’ “preferred prey base” may lead to the relatively large consumption of alternatives.

For example, a predicted reduction in snowfall and snow pack by 2050 “would substantially decrease” the marten’s wintertime advantage over other carnivores and would probably “increase predation rates. Consistently reduced snow levels may eliminate the competitive advantage martens have over fishers and possibly other predators.”

The plan calls for additional research to bolster the agency’s ability to develop and carry out strategies to conserve the marten.

Forest Service policies concern the amount of timber that can be salvaged, maintenance of old-growth hardwood stands, protection of existing downed logs and retention of snags and den trees. Also, the agency has delayed some projects in the Chequamegon-Nicolet where proposed logging was thought to adversely affect martens and their habitat, according to the DNR plan.