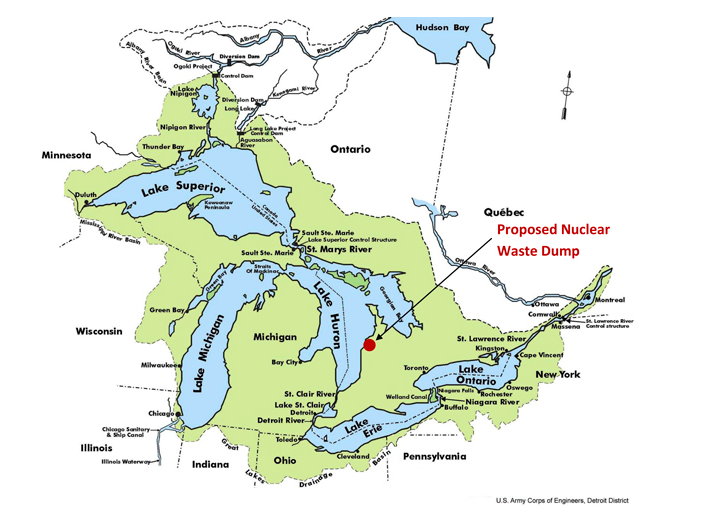 After public hearings on a proposed underground nuclear waste dump along Lake  Huron, a review panel will recommend if the Canadian federal government should approve the project.

A decision to issue the construction license to Ontario Power Generation (OPG) is expected by mid-2015.

The Ontario government owns the company, one of the largest power companies in North America. It provides more than half of the electricity for the province.

Currently, the company uses storage buildings in Kincardine, Ontario, for all the low- and intermediate-level nuclear waste produced from its 20 nuclear reactors.

The site is home to the Bruce Nuclear Generating Station, the world’s largest nuclear generating station with eight nuclear reactors. The power company plans to build a permanent place to bury nuclear waste at the Bruce site to replace its temporary one.

Neal Kelly, director of government relations at the company, said it did a four-year federal environmental assessment before sending its “Deep Geologic Repository Project for Low and Intermediate Level Radioactive Waste” to the Canadian government.

“It is the most rigorous environmental assessment that you can go through in this country,” he said.

The Joint Review Panel conducted two rounds of public hearings on this proposal, with the last one on Sept.18. The panel has 90 days from then to finish its

assessment for the federal government, which will decide whether to approve the project within four months.

Kelly said agencies like the U.S. Environmental Protection Agency and the Michigan Department of Environmental Quality have concluded that the geologic repository would have no adverse impact on the environment.

However, a number of environmental organizations and individuals are worried.

“Our organization does not believe that Ontario Power Generation should bury and abandon radioactive nuclear waste less than a mile from the Great Lakes,” said Beverly Fernandez, founder of the Canadian grassroots organization Stop The Great Lakes Nuclear Dump.

Fernandez said a petition to block the project gathered more than 70,000 signatures from “every province and territory in Canada, and all 50 U.S. states.”

But Kelly said scientists and geologists demonstrated no groundwater flows through the 680-meter deep repository spot. He also said the surrounding rock, hundreds of millions years old, can safely isolate the nuclear waste from the lake.

However, Fernandez said, “no scientists or geologists can provide us with a 100,000-year guarantee that this nuclear waste dump will not leak.”

Frank Greening, a former senior research scientist at the power company, said he did not believe that it has proven the safety of the proposed facility. “I am more concerned about the potential fault accident like fires, explosions or flooding that could occur underground.”

Having worked for the company for 20 years, Greening said its record in dealing with past fires and explosions made him worry about the repository proposal. “They are treating this waste just like you are treating garbage there. But it is not. It is
something far more deadly, far more radioactive, far more serious, and I think they’ve done a very poor job of assessing these dangers.”

The commission was created by the U.S. and Canada to resolve disputes between the two countries over issues affecting shared waters “as an independent and objective advisor” under the 1909 Boundary Waters Treaty.

Frank Bevacqua, public information officer of the commission, said it hasn’t investigated the issue and has no position on it.

“The IJC assesses the progress in the United States and Canada to meet the goals of the Great Lakes Water Quality Agreement. However, we do not have the mandate or capacity to investigate the many proposals for site-specific projects that arise throughout the Great Lakes basin,” he said.