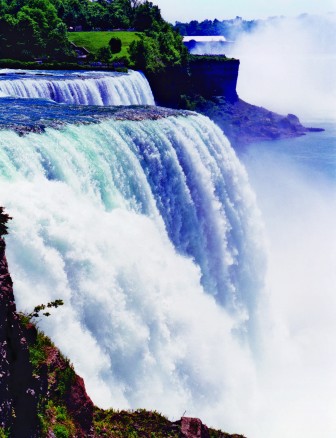 In 2011, Travel and Leisure ranked Niagara Falls as #5 on a list of the World’s

Most Visited Tourist Attractions, with an estimated 22.5 million visitors annually.

According to the Buffalo Niagara Riverkeeper, the Niagara River “is the neck through which four of the five Great Lakes drain. It is a national border. It is a mighty, rushing strait with spectacular falls. It is an internationally esteemed bird migration corridor. It is a renowned fishery.”

A proposed plan to expand a landfill, owned by CWM Chemical Services LLC in Youngstown, N.Y. will be determined for approval by the New York State Department of Environmental Conservation after November 21.

If approved, it will change the way wastewater is treated. It will also alter drainage patterns that discharge into the Niagara River, which flows directly into Niagara Falls.

Since the landfill is close to the Canadian border and Niagara River, there is great concern about the potential for pollution in both countries, environmentalists say. The river is already undergoing extensive cleanup initiatives by the International Joint Commission (IJC) and the U.S. Environmental Protection Agency (EPA).

The IJC regulates shared water uses between the U.S. and Canada. It also investigates trans-boundary issues.

Critics claim the landfill expansion could nullify the restorative measures now underway to alleviate the risk are of pollutants.

But Lori Caso, public affairs manager for waste management at CWM Chemical Services, said, “The company is expanding and the landfill is one of the most monitored sites in New York state, with monitors from the New York Department of Environmental Conservation there every day.”

Caso said, “The facility treats, stores and disposes of hazardous and industrial non-hazardous wastes from Canada, New York and other states.”

The site has other safeguards also, she said, “including 200 wells that monitor ground water so that we know nothing toxic is leaving the site.”

“ It all comes down to educating the public, whether it’s the U.S. side or the Canadian side, on the safeguards involved and what is happening on the site,” Caso said.

The Niagara River has a history of pollution and environmental activists in both countries say they want a guarantee that polluted wastewater pollution from the site won’t seep into the river and disrupt current cleanup efforts.

EPA press secretary, John Martin said, “Pollution in the Niagara River has degraded water quality and has had a direct effect on the quality of people’s lives. Over the years, the EPA has worked with other government agencies to address water quality issues on the Niagara.”

Martin said a 1987 plan to reduce toxics in the river focuses on, “land-based hazardous waste site remediation. We have seen a 94 percent reduction of pollution inputs to the river, and the treatment of sewage discharge into the river.”

Officials at the IJC, Buffalo Niagara Riverkeeper and the EPA, say they worry about history repeating itself and want to avoid the possibility of another potentially detrimental and horrific incident in the area, similar to that of the Love Canal a neighborhood in the city of Niagara Falls about a quarter-mile from the river.

The Love Canal was an environmental catastrophe in the 1970s that ultimately devastated wildlife, crippled plant life, annihilated ecosystems and caused a massive increase in birth defects and other medical problems, even beyond the neighborhood itself, according to the United States Environmental Protection Agency.

Frank Bevacqua, a public information officer for the IJC, said the commission has been concerned about toxic contamination in the river since at least 1981, when the Great Lakes Water Quality Agreement committed the U.S. and Canadian governments to “implement remedial action plans and to restore beneficial water uses in the areas of concern.”

“Due to the magnitude of problems in the Niagara River area, concerning contaminated material, much more work remains to be done,” Bevacqua said.

The Buffalo Niagara Riverkeeper, a nonprofit environmental group based in Buffalo, said, “The river is also afflicted by sewer overflows and storm water runoff. Sewage and storm water raise bacteria levels in the river and elevate levels of phosphates and nitrates, nutrients which can cause algae blooms and low dissolved oxygen.”

Other contamination comes from sewer systems. It’s estimated that Buffalo’s combined sewer systems contribute to more than 1.75 billion gallons of sewage overflow that filter into the river and its tributaries every year.

Nicole Lipp Duffin, the marketing and communications manager for the Buffalo Niagara Riverkeeper said, “We have several cleanup initiatives for sediment as well as through our citizen-based shoreline sweeps and water quality testing.”

“The last phase of the Buffalo River Restoration will be finalized this year,” Duffin said.

As for the proposed landfill expansion, the organization wants to ensure the protection of the Niagara River she said, and the project worries and disturbs its members.