ANCHOR INTRO: Ohio farmers caught in the headlights of the recent Toledo water crisis are defending their voluntary efforts to reduce phosphorus run-off to Lake Erie. That runoff is the primary source of toxic algae blooms. But Ohio farm groups and environmentalists say a new state law that will certify fertilizer use doesn’t go far – or fast – enough. For Great Lakes Echo, I’m Karen Schaefer.

AMBI: Sound of golf cart going through fields, under: 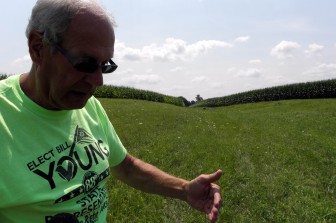 SCHAEFER: Bouncing along the edge of head-high corn fields in an electric golf cart, 65-year old, fourth-generation Ohio farmer Roger Wise is showing off grass-covered filter-strips that wind for miles along Wolf Creek, a small tributary of the Sandusky River less than 10-miles from Lake Erie.

WISE: We have a buffer between the corn and the crick over there. There’s a lot of wildlife back here, It’s primarily wildlife and water retention and conservation. 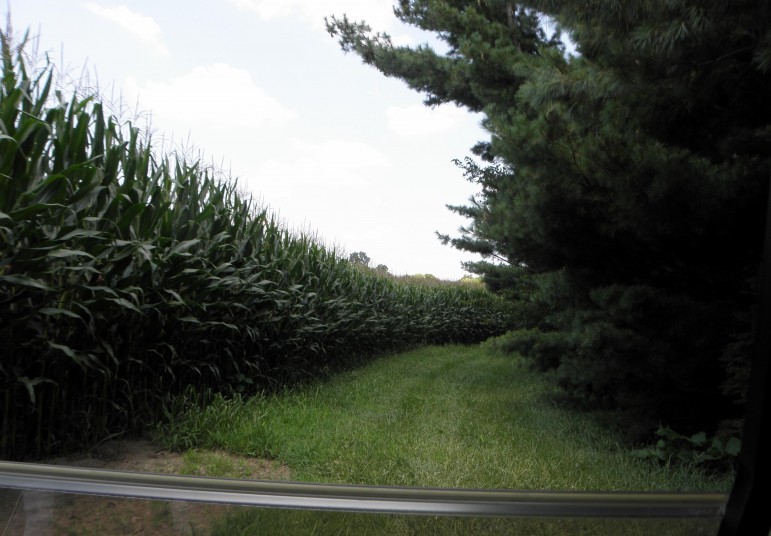 SCHAEFER: Filter strips, paid for by federal conservation programs, are just one way to help curb phosphorous run-off. Wise farms about 750-acres just south of Sandusky Bay, which like nearby Maumee Bay at Toledo, is plagued with toxic blue-green algae. Wise is thinking of adding a sluice gate to the end of the underground tile drains that help dry out his fields for spring planting.

WISE: And that gate can be closed, which will stop the water flow at that box.

SCHAEFER: Slowing the water during heavy rains is another way to reduce fertilizer runoff. Wise also employs GPS to map his fields, performs annual soil fertility tests, and uses cover crops like red clover to soak up excess nutrients. A past president of the Ohio Farmers Union, Wise says his agency has been educating farmers about the algae issues. What concerns him now is a loophole in the new state fertilizer certification law that exempts many large dairy, hog, and poultry farmers who spread manure on their fields. 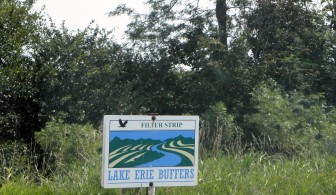 SCHAEFER: Jack Shaner is deputy director of the Ohio Environmental Council. He says the new law requires only chemical fertilizer applicators to be certified, not those who use manure. And it doesn’t take effect until 2017.   Shaner believes it’s time for more urgent farm regulation.

SHANER: We need to put Lake Erie on a nutrient diet. It’s time to declare the western basin, the Maumee River watershed, a watershed in distress. It’s time to put a daily limit on pollutants that flow into that lake. Time to close the fertilizer applicator loophole and make sure that animal manure comes under that.

WARD: We’re probably talking something like a hundred-million dollars a year would be needed in Ohio every year, for many, many years.

SCHAEFER: However flawed, most critics agree that Ohio’s new fertilizer certification law is a baby step in the right direction toward more precise fertilizer management. Still, Roger Wise of the Ohio Farm sometimes likes to test for fertilizer use the old-fashioned way. He peels back the husk on an ear of field corn.

AMBI: Sound of Wise peeling back an ear of field corn, under: 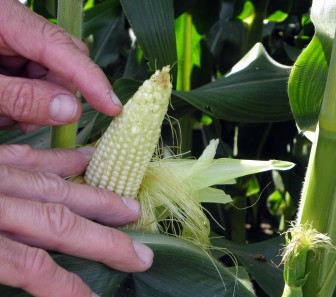 WISE: See here on the end, these will not develop. And that’s a good thing, because if every kernel was yellow right to the bitter end, that means there was more potential there. By having this little bit done, means we’ve maximized the yield, maximized the potential, done everything we should.

SCHAEFER: But two other states in the Maumee basin are already regulating phosphorous run-off in ways Ohio is not. In Indiana, two recent state laws restrict the amount of phosphorus farmers may apply from manure or chemical fertilizers. And Michigan banned phosphorus in lawn fertilizers in 2010. Compare that with Ohio-based fertilizer giant Scotts’ voluntary removal of phosphorus from lawn care products in 2013.

This story was updated 8/14 to correct the former title of Roger Wise.