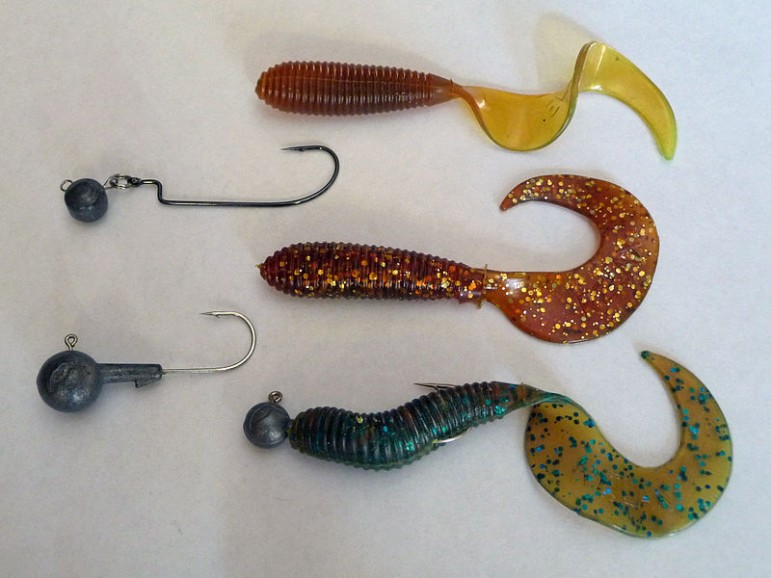 Plastic lures with a soft, rubbery texture are among the most common lures. Image: George Chernilevski, Wiki commons

Researchers are searching for ways to reduce the harm soft plastic fishing lures cause fish.

Snorkelers in Charleston Lake in eastern Ontario found as many as 80 lures every 50 miles, and it’s not the hooks that are troubling the people who are studying them.

When swallowed by a fish, a lure expands inside its stomach and make digestion difficult. And there is little evidence that soft plastic lures decompose underwater, according to a recent two-year study.

Soft plastic lures look like worms, leeches, and crayfish and have a texture the researchers describe as like an inedible version of gummy worms. They are among the most common types of lures anglers use. Roughly one-third of all lures sold are soft plastic, said Steven Cooke, an associate professor of biology at Carleton University in Ottawa who partnered on the project.

Any fish with the potential to ingest the plastic lures is at risk, said Cooke. Small to medium-sized fish, such as walleye and smallmouth bass, are most affected.

There are two ways lures frequently end up at the bottom of lakes, said Cooke. One is when people discard old or broken lures into the water. The more common way is when a fish tears the lure off its hook.

The study by researchers from Carleton and the University of Illinois, Exploring the Potential Effects of Lost or Discarded Soft Plastic Fishing Lures on Fish and the Environment, was recently published in the journal Water, Air and Soil Pollution.

In light of the study, researchers are now looking for ways to prevent more lures from endangering fish. Our goal is to try and reduce lures finding their ways into water bodies, said Cooke.

Some states have considered banning soft plastic lures. In 2013, legislators in Maine proposed a bill to prohibit their use throughout the state.

Cooke said the soft lures could be made out of alternative materials to make them less likely to tear off their hooks and decompose faster. There is room for the industry to make truly bio-degradable lures, he said.

Cory Suski, an associate professor of natural resources and environmental science at the University of Illinois in Urbana-Champaign, suggested that anglers regularly inspect their lures and properly dispose of damaged ones in the trash.

He also suggested that lures be attached to metal O-rings before being placed on hooks to prevent the lures from becoming lost.

Cooke said that while the effects of ingestion of the lures by other animals, such as birds, is unknown, their negative effects would be far less significant if they were in a landfill.