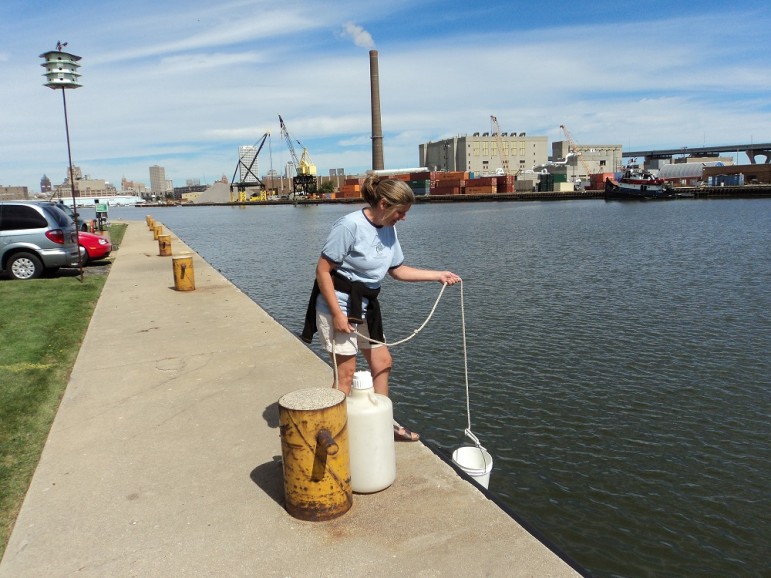 Sandra McLellan, professor and senior scientist at the University of Wisconsin-Milwaukee’s School of Freshwater Sciences, samples water in June off the school’s dock wall in the inner harbor of Milwaukee. She has found sewage migrating from old pipes through soil and into the stormwater lines that drain to lakes or streams. She says the problem is likely to occur in Madison and cities nationwide. Photo courtesy of Sandra McLellan.

A Milwaukee scientist who has found sewage migrating from old pipes through soil and into the stormwater lines that drain to lakes or streams says the problem is likely to occur in Madison and cities nationwide.

“In any urban area, this is going to be an issue,” said Sandra McLellan, professor and senior scientist at the University of Wisconsin-Milwaukee’s School of Freshwater Sciences.

From 2008 to 2012, McLellan and colleagues from her laboratory analyzed more than 1,300 water samples from stormwater outfalls in six Milwaukee-area watersheds, looking for a bacterium called Bacterioides that indicates the presence of human sewage. Human waste carries disease-causing pathogens like viruses, which are difficult to detect.

They found the marker in every watershed. In the Menomonee River watershed alone, more than half of the outfalls were chronically contaminated with sewage.

The findings indicate that “stormwater inputs continue to create a public health risk at these rivers and their tributaries, and by extension, to Lake Michigan and local beaches,” according to a draft of their report, which was funded in part by the Milwaukee Metropolitan Sewerage District and the Wisconsin Department of Natural Resources. The final version is set for release soon.

The outfall samples were collected and mapped by Milwaukee Riverkeeper, a nonprofit environmental group, whose work was funded in part by the Joyce Foundation.

The amount of sewage may be substantial. Early work in the most contaminated areas of the Menomonee River found that stormwater from nearly half of the investigated outfalls was composed of at least one-quarter sewage.

They reported Bacterioides in every outfall at some point, “suggesting sewage contamination is nearly ubiquitous in the urban environment.”

But McLellan said she has focused on parts of Milwaukee where the pipes are separate, like in Madison.

She said inland lakes like Madison’s may be more sensitive to this type of contamination than Lake Michigan, which can dilute pollution with a lot more water.

The U.S. Environmental Protection Agency acknowledges it could be a problem nationwide. The agency cites research from Southern California showing that people who swam in areas near flowing storm drains were 50 percent more likely to get sick than those who swam farther from the same drains. 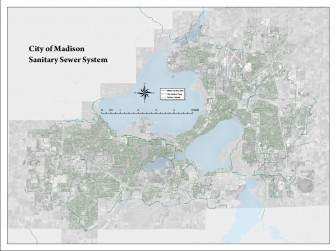 Stormwater pipes in Madison. Sewer pipes could be leaking pathogens to stormwater pipes, as they are in Milwaukee, says researcher Sandra McLellan. Graphic courtesy of City of Madison Engineering Department

This idea that the pathway from sewer pipes to storm drains might be a significant source of contamination even in areas with separate systems is new, as is the ability to track it.

Whether it is happening in Madison is unknown, said Trina McMahon, a University of Wisconsin-Madison professor of civil engineering who studies the area’s Yahara lakes.

Three years ago, when she sat on a multi-agency committee considering how to improve the Yahara lakes’ beaches, she was not concerned about sewer-stormwater cross-contamination.

“I was a skeptic about the (human) bacteria or pathogens being in the stormwater,” she said. “But the work coming out of UW-Milwaukee has really changed my mind on that.”

“The sanitary sewers are so leaky. There’s so much potential for sewage to get into stormwater and go into the lakes,” McMahon said.

Madison residents have been shunting their fecal waste into the Yahara lakes for more than a century. They have also long known this was a problem.

The year 1928 brought the first diversion of sewage around Lake Monona. In 1958, it was diverted downstream of Monona, Waubesa and Kegonsa – the three lower lakes. Waunakee and DeForest were the last to stop pumping their waste into Lake Mendota, in 1971.

The lake water cleared up a bit after that, though agricultural runoff became the main pollution source at that point.

Still, each year the beaches are closed because of the likely presence of fecal waste – the main reason for beach closures nationwide, according to the EPA.

In Madison’s Yahara lakes, beaches were closed more than 1,300 times from 1996 to 2013, with an average of 75 closure days (one day’s closure at one beach) each summer, according to a Wisconsin Center for Investigative Journalism analysis.

About half of the closures since 2008, when recordkeeping improved, were prompted by high levels of a harmless strain of E. coli that indicates fecal waste, though not necessarily sewage.

Often, rainfall washes the dirty water into the lake. The feces of birds, the raccoons that live in storm drains, and the geese at Vilas Park are all likely culprits for bacteria-based beach closures, according to beach manager Kirsti Sorsa.

Human sewage is far more likely than urban stormwater to contain pathogens that make people and their pets sick, according to the EPA. The tests most often used do not distinguish between human waste and other types of fecal waste.

Several pathways to the beach from sewer pipes are already known. Every now and then plumbers connect sewage pipes directly to stormwater lines, either out of expediency or by accident. The city has a crew that sleuths out these “illicit” connections – usually finding one or two a year – and gets them fixed, said Madison city engineer Greg Fries.

And big floods pose big risks of contamination. In 2008, floodwaters overwhelmed sewer systems in more than 160 communities statewide, causing raw sewage to flow into nearby streams and lakes, the Wisconsin State Journal reported.

Sewer-to-stormwater contamination is a different kind of problem: smaller volume, less catastrophic – and much harder to diagnose.

The pipes across Wisconsin and below much of the nation are crumbling – even disintegrating, as they were found to have done in the city of Adams, in Adams County, in 2008.

Of Madison’s 800 miles of publicly owned sewer pipes, the oldest date to the early 1900s and are made of clay.

Army Lt. Col. Chris Gellasch, while a graduate student at UW-Madison a few years ago, found human viruses in Madison’s groundwater, indicating that the sewer pipes were leaking.

His project traced those viruses’ travel down to deep groundwater aquifers from which drinking water is drawn, not the stormwater connection, for the most part. He did, however, also find that major rainfalls correlated with a surge of effluent levels in sewer pipes, which “may suggest a connection between the two sewer systems,” he said.

Gellasch noted in an email that even if viruses reach the lakes, whether they pose a public health threat depends on their concentration and how long they remain infectious.

Fries, the city engineer, knows well how leaky the pipes are. In fact, water infiltrating them is a significant problem, which is why the city is spending $1.3 million this year in an ongoing project to line the old sewer pipes with epoxy. It renders them about as good as new and costs far less than replacing them, Fries said.

That project will continue at least an additional five years, and will cover only the city-owned lines – it does not include the laterals, which are privately owned sewer lines from homes to the street that are often just as old.

Presumably, the lined pipes would be less likely to leak sewage.

Fries agreed there was potential for a problem but was not persuaded it was widespread in Madison. Sanitary sewer pipes are typically laid 10 feet deep, while stormwater pipes are around 4 feet.

The exception, he said, might be areas like the Isthmus – where both the stormwater and the sewer lines are in shallow groundwater.

McMahon said more research on the issue could help determine which pipes are most in need of replacement or fixing.

“It would make sense to put some resources into trying to figure out just how big of a problem it is,” McMahon said.

This series, Murky Waters, was produced collaboratively by The Capital Times and Wisconsin Center for Investigative Journalism. It is part of  Water Watch Wisconsin, a project supported by The Joyce Foundation that is examining water quality and supply issues statewide.

One thought on “Leaky sewer pipes could export viruses to lakes”