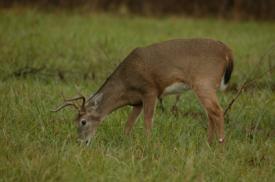 Hunting combined with the controversial practice of culling can help control chronic wasting disease (CWD) in white-tailed deer better than hunting alone, according to a recent study done in Illinois and Wisconsin.

It’s been used in both Illinois and Wisconsin to control the spread of the contagious neurological disease that infects deer, elk and moose. CWD causes a spongy degeneration of the brain and results in emaciation, abnormal behavior, loss of bodily functions and death, according to the Chronic Wasting Disease Alliance.

Illinois and Wisconsin are among the Great Lakes states experiencing an increase of white-tailed deer amid continued concern about the fatal disease.

The study recently published in the journal “Preventive Veterinary Medicine” was done by scientists at the University of Illinois at Urbana-Champaign.

The disease was first detected in Illinois and Wisconsin in 2002, and both states swiftly banned moving deer — relocation — from infested areas.

However, the two states adopted different CWD management strategies, according to the study.

Starting in 2003, Illinois culled deer in localized 25-square-mile sections where the disease had been detected, and it added hunting seasons to lower the population. That same year, Wisconsin began culling in a 410-square-mile region surrounded by “deer reduction zones.”

According to the Illinois Department of Natural Resources, the state doesn’t relocate white-tailed deer anymore because it causes stress on the does and they have a low survival rate.

One key question is: why was there an increase in white-tailed deer?

Shawn Riley, a professor at Michigan State University in the Department of Fisheries and Wildlife, said, “White-tailed deer adjust well to human life.”

And David Marks, a Michigan-based wildlife disease biologist at the U.S Department of Agriculture’s National Wildlife Disease Program, said, “There are less predators because humans have removed them, and because there is such great agriculture in the Midwest, there is a lot of food for the deer to eat.”

Marks compares how white-tailed deer get infected to how humans get the flu: “You do not want the flu to spread, so that is the same thing with CWD in white-tailed deer. Culling helps reduce density so it makes it harder for the disease to spread.”

The second key question is: How does the disease spread?

“There is an indirect or direct contact,” said Marks. “Direct is from deer to deer and indirect is if an infected deer sheds CWD in a food pile, and then another deer eats from the same food pile.”

Culling is a way of helping get rid of diseased deer. But is it the best option and is it the only option?

Stephanie Boyles Griffin, the senior director of wildlife response, innovations and services for the Humane Society of the United States, said culling isn’t the best way.

“Culling does not solve the problem,” said Boyles Griffin. “This could cause a rebound effect and cause a lack of competition.” The rebound effect is when does reproduce more quickly to make up for those that are being removed.

Boyles Griffin suggested two other ways to help prevent overpopulation and the spread of the disease. One is fertility control and the other is surgical sterilization.

Fertility control involves administering drugs to keep does from reproducing. One drawback is that it isn’t permanent. A more permanent solution is to surgically sterilize females by removing their ovaries, Boyles Griffin said.

The University of Illinois study said Wisconsin stopped culling in 2007 “because of public resistance and declining legislative support,” while Illinois continues the practice, the study said.

Researchers found no statistical differences in the CWD rates between the two states from 2003 to 2007 when both actively culled deer. However, the disease rate increased in Wisconsin in the five years after it ended culling.

As the study observed, “Despite its unpopularity among hunters, localized culling is a disease management strategy that can maintain low disease prevalence while minimizing impacts on recreational deer harvest.”

The scientists also found that “hunter harvest” has increased across Illinois during the past decade, both in and out of areas where culling occurs.

“The Illinois disease management program has removed an average of 747 deer per year from the 10 countries where CWD has been detected since 2002,” the study said. “This represents 4.9 percent of the approximately 15,000 deer removed from those counties during each hunting season and has not resulted in a reduction in overall hunter harvest in those counties.”

Even so, the study noted that hunter harvest dropped significantly in two of the four counties with the most culling but remained unchanged in the other two.