Michigan received $152,000 in federal grants in 2014 to monitor the cleanliness of its lakes and beaches. 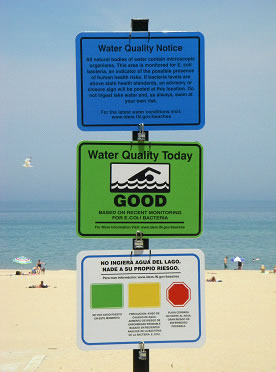 That’s more than $200,000 less than the state was allotted in 2013, according to Department of Environmental Quality toxicologist Shannon Briggs.

And state lawmakers have already spoken for nearly two-thirds of this year’s money by allocating $100,000 of it to the Macomb County health department in southeast Michigan.

The downside is that there is far less money allocated to testing water safety elsewhere in the state this year.

But supporters hope that the $100,000 investment to implement a new water testing system at Lake St. Clair Metropark in Macomb County pays off in the long term.  The high-tech system could revolutionize the detection of unsafe levels of E-coli bacteria by finding it in a couple of hours. Currently, E-coli test results can take up to an entire day, said Briggs.

“Usually you have to pour the water into a little plate, and you grow it and count how many organisms grew — that’s the old method,” she said. “That’s why it took a day.”

That’s an issue because water quality can change significantly over the time it takes for results to come in, says Briggs. But the new rapid testing technology can show same-day E-coli levels.

“Now, you have your water sample and you pour it into a container, and it measures the DNA of the organisms,” she said. “Then, you can say ‘I know how many organisms are present because I counted their DNA.’”

“Just about every community in Michigan would love to start using that rapid technology,” she said. “However, there’s some cost involved and it’s not a simple procedure to do.”

While the technology is in high demand, it is still being tested. And the $52,000 that is left over for other areas simply isn’t enough money to go around. The state will have to pick and choose who gets funding and who doesn’t, Wurfel said.

“The money is certainly an issue, especially in communities that are strapped. We don’t want to minimize that,” he said.

“Now, we take what’s left and try to focus that on beaches that have a recent history of continual problems that are a threat to the public health,” he said.

The funding shift means that 37 state environmental organizations and health departments that received grants for beach and water monitoring in 2013 will likely receive nothing this year.

Lakes and beaches across Michigan will not be as closely watched for harmful E-coli, said Christine Crissman, executive director of The Watershed Center in Grand Traverse Bay.

“Not having any funding to be able to go out and monitor the beaches that are heavily used during the summertime means that people don’t have that peace of mind of knowing that the area that they’re recreating in is safe,” she said.

“There is definitely less certainty for understanding the levels that are going to be out in the bay,” she said. “If we aren’t doing the testing, then we really don’t know what we’re up against.”

Briggs and Wurfel acknowledge that the situation is far from ideal, but say the investment in Macomb’s technical capacity in 2014 will benefit all of Michigan. Wurfel said if the rapid testing technology is successful, it will be used in other communities.

“We’re doing what we can, in a triage way, for communities this year,” Wurfel said. “But in the years to come, that investment is going to pay off huge around the state.”

The only reason the funding continued since cuts were proposed is because, until recently, the federal government hadn’t passed a budget since 2009. And while the federal budget that was approved in January was rewritten by Congress to include beach funding, Briggs says it could be on the chopping block next year–which would leave it to state and local governments to completely fund their beach monitoring programs the following summer.

By using a large chunk of money right now to improve rapid water testing, state officials hope to demonstrate a commitment to accurate and timely results before the federal government passes a budget that completely cuts the BEACH Act.

“We’re going to go invest in the rapid (water testing) technology, and we had to do it before we lost the opportunity to even do that,” Briggs said.

“We’re saying to the federal government, ‘We want to use the rapid (water testing) technology, and we believe this beach monitoring program is valuable,’” she said. “It provides great information, and it protects several hundred communities across the Great Lakes, including in Michigan.”

Meanwhile, water quality will go untested where it was checked in previous years; and, with the uncertainty of federal funding, many beachside communities won’t know if 2014 is a hiccup in financial support, or the first of unfunded years to come.