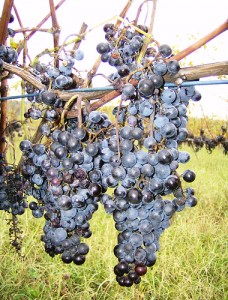 With temperatures often in the negatives this winter, winemakers are worried much of their crop may be done for. Photo: Flickr.

The polar vortex has Michigan wine producers worried about their crops.

Cold weather is nothing new for Michigan but its vineyards are not used to recent record-breaking lows. The polar vortex in December raised concerns but cold temperatures in late-January have Michigan growers worried that their vineyards may be destroyed.

Some grapes can survive temperatures as low as the negative 30s but for certain varieties that grow in Southern Michigan, temperatures even as low as 5 degrees can be dangerous.

Southern Michigan was hit the hardest with temperatures as low as minus 15.

Wineries that buy their grapes from those areas may run into trouble and growers said there is no way of knowing how hard their vineyards were hit until the spring.

“Everybody is kind of worried right now and a lot of people are crossing their fingers and praying that these vines made it through,” Kownacki said.

“I have eight buds, let’s say. [When buds appear] in April and there is a frost in early spring, the vine will send out a second set of buds and the second buds come in. They won’t be as big and won’t bear as much fruit.

“If there is another frost, the third buds will break and usually there won’t be any fruit but  they will be set to thrive in the summer,” he said.

Dead vines can have a devastating impact on wineries because a vineyard requires a large capital investment. If the crops die, growers also have to hire workers to remove dead plants and invest in a new vineyard.

It is too early to tell how severe the economic impact will be on the industry, if any. “It is going to be financially strenuous on the winery. Yes we will have higher labor costs now because I may have to rip out entire vineyards where the vine might be completely dead,” Kownacki said.

“What people don’t realize about the wine industry is that you plant a vineyard but you don’t really pull a crop that is worthy of wine production until after about four years. So you make a huge capital investment and then you have to put all of this labor-intensive work into training and maintaining these vines,” he said.

Nature maybe giving Southern Michigan the cold shoulder but growers elsewhere are more confident. Northern Michigan wineries typically grow their own grapes and have stock from previous years to protect them from financial blows the caused by the weather.

“The upside is that we got plenty of snow and all of that snow blanketing the vineyards  acts as an insulation barrier against the freezing cold. I know that seems counter intuitive but thats true,” said Lee Lutes, winemaker at Black Star Farms in Suttons Bay.

Another possible problem for winegrowers is how a potential disaster could affect tourism.

Both Lutes and Kownacki said many tourists visit their wineries each year.

“Tourists come to Michigan to try our wine. If we make wine from grapes that are grown in California, what would be the purpose of coming to Michigan for wine?” Kownacki said.