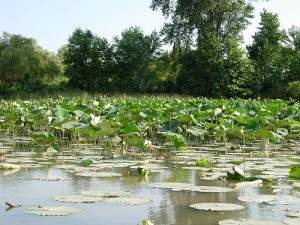 A large gain in the size of Michigan’s coastal wetlands between 2004-09 may obscure much larger, longer-term losses that are likely to continue, experts say.

The Great Lakes region gained 13,000 acres in the five-year period, according to a report by the U.S. Fish and Wildlife Service and National Oceanic and Atmospheric Administration, but much of the gains is due to low levels in the Great Lakes.

The report highlighted how the rate of coastal wetland loss across the United States is increasing.

Public and private efforts to preserve wetlands have also added small gains, but researchers and state regulators cautioned that those gains need to be put in the context of a long-term overall loss of wetlands in Michigan.

Chad Fizzell and his colleagues at the Department of Environmental Quality analyzed inventories of wetland coverage from 1978, 1998 and 2005.

“We now have some idea of gains and losses over the whole state, including the inland wetlands,” Fizzell said, adding the information will go into a report in the coming months. “What we’re seeing is a pretty definite loss over that 30-year period — between 50,000 to 75,000 acres of loss.”

Wetlands are a vital part of the environment, providing habitat for fish and animals and filtering out pollutants that run off the land, said Donald Uzarski, the director of the Institute of Great Lakes Research at Central Michigan University.

Some of the most important wetlands in the Great Lakes region include Michigan’s Grand Traverse Bay, the Les Cheneaux Islands in Mackinac County and the diverse river mouth wetlands in Manistee County, he said.

With regard to the gains along the coasts, Uzarski said much of it can be attributed to unusually low Great Lakes water levels over that same five-year period.

“As the shoreline moves away from the upland, the wetland essentially follows it,” Uzarski said. “Usually, the amount of wetlands stays the same over the years as water levels rise and fall because wetlands move to where the shoreline is. But we’re seeing low levels that have rarely happened in the past.”

Moreover, as shorelines have been developed for urban and suburban expansion, inland movement of wetlands is blocked if lake levels rise, he said. “If we develop a shoreline — put in a seawall, a parking lot, a hotel — that wetland can no longer migrate toward land.

“So, at face value, gains are a good thing. However, the type of wetland is not improving,” Uzarski said.

“We’re seeing invasive phragmites, for example, essentially taking over. As the water levels dropped, we’ve seen these invaders quickly jump in and take over regions, whole wetlands,” he said.

Phragmites are reed-like plants not native to Michigan and do not provide much of the environmental value supplied by natural wetlands. However, they do fulfill several important functions, such as taking up toxic substances and removing them from the ecosystem.

The long-term loss has amounted to about 40-50 percent of the natural wetlands Michigan historically had. For example, Saginaw Bay has lost 95 percent of its wetlands, even though it remains a major wetland area.

The initial losses came mostly from farmers who pumped water out of the wetlands to make them suitable for farming, Hamilton said.

“That really accelerated in the early 1900s,” he said. “Some of that farmland eventually became used for other purposes like residential land or even expanding cities.”

But some efforts are underway to try to slow it down now.

“A variety of federal, state, private organizations have had programs to set aside and restore land,” said Thomas Dahl, a Madison, Wisconsin-based researcher with the U.S. Fish and Wildlife Service. “We’re seeing them come back on some of those lands.”

Dahl said a lot of conservation comes from efforts put into the language of farm bills.

“Some of those measures deal with stream buffer habitats, others directly with conservation of areas, others are land retirement programs.”

The U.S. Department of Agriculture has sponsored many such efforts and partners with local private groups such as Ducks Unlimited.

Fizzell said, “Initiatives such as that department’s Wetland Reserve Program and the Fish and Wildlife Service’s Partners for Fish and Wildlife Program do have a significant acreage put on the ground every year, but they’re not replacing enough to offset the losses.

“When you look at inland wetlands, those not connected to the Great Lakes, there is a pretty steady decrease in wetland acreage over time” – a loss of more than 2,000 acres per year from 1998 to 2005.

Editors note: This story was corrected Dec. 20, 2013 to reflect proper rate of wetlands loss and the source of that information.