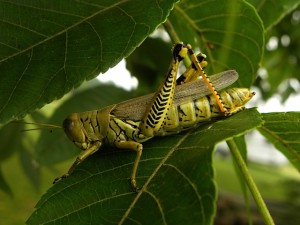 Insects could help decide what fuel goes in your vehicle’s tank.

A recent University of Wisconsin study looked at whether genetically modifying poplar trees to more easily produce ethanol could also make them vulnerable to insect pests. The findings, published on ProQuest.com, may bring genetically engineered poplar trees one step closer to commercial use for a biofuel made from the cellulose in plant cell walls.

The genetic modifications had little to no effect on the trees’ susceptibility to insects, said Christine Buhl, who did the research.

The insect defenses of the genetically modified trees are no different than their wild counterparts, said Rick Meilan, associate professor at Purdue University. Meilan is involved in a five-year study looking at genetic modifications of poplar trees to more easily produce cellulosic ethanol.

The poplar trees were altered in two ways, Buhl said. The plant growth hormone was reduced, allowing for the trees to be planted closer together, making them easier to cultivate. And the composition of lignin, a component in plant cell walls, was changed. This change makes the production of ethanol from poplar trees easier.

Plant cell walls are made up of carbohydrates and lignin, Meilan said. Unlike corn ethanol, which uses the plant’s seeds to produce the biofuel, cellulosic ethanol uses the cellulose in a plant’s cell walls.

The advantage is that the plant walls have more cellulose available. 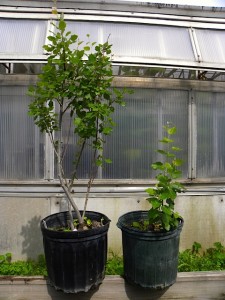 “All plants are made up of cells that have cell walls,” said Meilan.

However, cellulose is bound tightly with the lignin.

“We have to use really harsh chemical treatments to extract the lignin,” said Meilan.

These treatments degrade the amount of sugars available for ethanol production, he said. There is then less cellulose to make ethanol.

“That’s the reason why right now, virtually all ethanol that’s used for biofuel production in the U.S. as a liquid transportation fuel that’s blended with petroleum, virtually all of that ethanol comes from corn,” he said. “And that, in my opinion, is not sustainable. It’s not ecologically, it’s not environmentally and it’s not economically viable in the (terms) of sustainable.”

But the poplar trees can be genetically modified so that the sugars needed for ethanol could be easily separated from the lignin, said Buhl.

Buhl’s results have a couple of different implications.

Some critics think if the lignin is meddled with, the plant will be more susceptible to insects and disease, said Meilan. Government regulators are afraid the trees in his study will breed and let their tampered genes get out. Then they would breed with other trees and ruin the gene pool.

“So what we’re doing is trying to make it easier to extract the lignin without screwing up the plant,” he said.

Buhl’s research begins to address some of the fears.

“Poplar is a very pest susceptible crop so we don’t want to reduce (its) defenses any further when genetically enhancing other traits,” said Buhl. “These lignin modifications did not have an effect on poplar defense so they may be used to create genetically enhanced poplar crops, which may be more efficiently processed into ethanol.”

This work is only one piece of the puzzle. More testing is needed before using these trees becomes widespread.

“I analyzed but a few of the many possible modifications of (the plant growth hormone) and lignin that are possible,” said Buhl.

That is not dissuading others from looking towards the future.

“It’s kind of exciting because we’re finally starting to see cellulosic ethanol be economically and technically feasible and start to produce this in the U.S. at more than a pilot scale,” said Dennis Pennington, bioenergy educator at the Michigan State University Extension.

Other researchers are looking at the sustainability of cellulosic ethanol.

“Our results sort of get incorporated into that sort of big picture idea whether (cellulosic ethanol) will work on a large scale or not,” said Sarah Roley, research associate at Michigan State University. 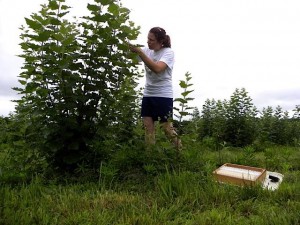 “The large-scale benefits of these applications are improved efficiency and sustainability of resources … which in the end not only conserve our resources, but are more cost-effective for growers and/or producers,” she said.

While Buhl will not be continuing her research, she looks towards the future.

Cellulosic biofuel made from plants such as poplar can be more efficient than those made from corn, she said. But both will just supplement and not replace petroleum.

“All of these additional fuel sources combined with reduced consumption where possible will help greatly reduce our dependence on petroleum,” she said.