Ohio officials have built an artificial wetland to help prevent blooms of toxic algae in Grand Lake St. Marys by filtering runoff from a nearby creek.

The Ohio lake located about two and a half hours southwest of Lake Erie has been a hotspot for toxic algal blooms over the past few years. 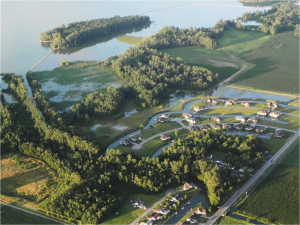 Excess nutrients in water runoff are a leading cause of harmful algal blooms, a sudden growth of toxic algae that significantly reduces the supply of oxygen to marine organisms. Algal blooms have been a growing cause of concern in communities all over the country, notably in the Great Lakes region, where nearly 45 percent of all the reported incidents occurred this summer.

“It didn’t happen overnight, and it won’t be fixed overnight,” said Ohio Department of Natural Resources spokesperson, Mark Bruce. “This is part of a multifaceted operation to improve the health of water. Our end goal is to not have algae blooms in Grand Lake St. Marys.”

Construction of the 200-acre project started in the spring of 2012, said Milt Miller, manager of the Grand Lake St. Marys Restoration Commission. Operation of the Prairie Creek site began in June of this year.

About 1.3 million gallons of Prairie Creek water is pumped each day through an alum dosing station, settlement ponds and wetlands.

Alum is a binding agent that weighs down excess nutrients as the water travels through the settlement ponds. It is used to supplement the natural filtering process done by the plants in the wetlands.

“The wetland was doing such a good job by itself that we didn’t start using alum until a few weeks ago,” said Miller. “With fall coming on, you have a shorter growing season, and the plants weren’t taking up the phosphorus.”

The idea is to catch as much of the nitrogen, phosphorus and dissolved reactive phosphorus as possible before they enter the lake. Each of these is a contributing factor to harmful algal blooms and increase in toxic cyanobacteria, but the third is of particular concern. 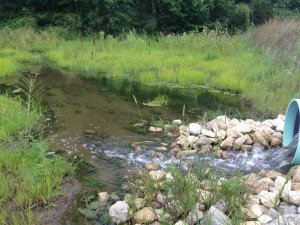 Water is discharged from treatment facilities into artificial wetlands, where many excess nutrients are filtered out before entering the lake. Photo: Grand Lake St. Marys Restoration Commission.

“Soil carries phosphorus binded to it to the lake. Dissolved phosphorus actually comes in the water.”

Prior to when alum dosing began, data was collected by the Grand Lake St. Marys Restoration Commission of the amount of these nutrients going into and out of the system. Since June, nitrogen levels going into the lake from the Prairie Creek watershed have been decreased by an average of 41 percent. Additionally, dissolved reactive phosphorus output has dropped an average of 65 percent, and phosphorus outputs have dropped almost three-quarters. Numbers since alum dosing began will be collected in the coming weeks.

Plans for an additional 40-acre treatment train at neighboring Coldwater Creek have also begun. Though there is not a yet an exact time table, the Grand Lake St. Marys Restoration Commission would like to have it functioning by the early summer of next year.