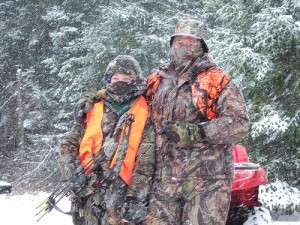 The council can be created with the projected $1.6 million the Department of Natural Resources estimates it will generate from the hunting and fishing license increase. Photo: Flickr/Creative Commons.

Fresh from Gov. Rick Snyder’s approval of the first hike in hunting and license fees since 1997, lawmakers now want to establish a way to use the $1-per-license surcharge for media and promotion.

Their bill would create a Michigan Wildlife Management Public Education Fund to finance a new wildlife council. The council would develop “a comprehensive media-based public information program to educate this state’s general public about the benefits of wildlife, wildlife management and the important role that licensed hunters, anglers, trappers, sportsmen and sportswomen play in wildlife and wildlife management.”

The state will collect the $1 surcharge, which was included in the new fee structure, on base licenses, combined hunting and fishing licenses, and all-species fishing licenses. The Department of Natural Resources (DNR) estimates it will generate $1.6 million the first full year.

Under the bill, the DNR director would appoint unpaid council members, including active hunters and anglers and representatives of agriculture and of businesses “substantially impacted” by fishing and hunting.

“We need to educate the public,” said Bumstead, R-Newaygo. “DNR is good at a lot of things, but marketing isn’t one of them.”

And Erin McDonough, executive director of Michigan United Conservation Clubs, said most people don’t know that license fees “pay for the lion’s share” of the costs to manage the state’s natural resources, benefiting other outdoor sports like hiking, kayaking and cycling.

Boosters of the fund say Colorado’s “Hug a Hunter” and “Hug an Angler” media campaigns have been successful. Michigan will be the second state to undertake such a program, McDonough said.

Effective next March, most hunting and fishing fees will rise. Revenue from the fee hike — estimated at $18.1 million the first full year, not counting the surcharge — will be spent to improve fishing and hunting opportunities, including habitat protection, and for conservation officers and wildlife biologists.

So far this license year, it has sold 1.2 million hunting licenses. Golder said that number will jump substantially when the license year ends next February 28 because most are sold during deer season.

The bill is pending in the House Natural Resources Committee.