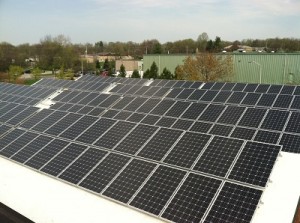 Early last year, the county — home to Bloomington and Indiana University — made headlines when it received a grant to create one of the largest solar panel systems in the state. Now it is a little more than a year into what county officials say is one of the most comprehensive energy plans in government.

In summer 2012, the Indiana Office of Energy Development funded the county’s Community Energy Plan, an initiative that calls for an alternative-fuel government fleet, community outreach programs and extensive energy upgrades in the nooks and crannies of all 19 county-owned buildings.

The savings from these efforts then go into an energy fund to pay for yet more energy and sustainability projects.

This latest splash could make the county a viable candidate for one of the greenest governments in Indiana, if not the Great Lakes region.

“I haven’t been able to find another example of a non-reverting energy fund in the state,” said Ashley Cranor, Monroe County grants administrator. “From all we could find, it looks like we’re one of the first to do this, if not the first.”

Although Cranor said a lot of the facets of the energy plan are in the early stages, she said she wished the initiatives would generate more buzz, which could lead to other counties and cities using the Monroe plan as a model.

“I don’t think it’s getting enough attention,” said Cranor. “We don’t even have a sustainability coordinator and we’re doing all these great things that other places could be doing too.”

Not everyone is as enthusiastic.

Monroe County Council approved the energy fund in May 2012 by a vote of 5-2. A council member who voted against the fund says the money saved through the energy initiatives could and should be spent elsewhere.

“We ought to be saving money — we’ve laid people off, we have so many things lacking funding right now,” said Marty Hawk, a Monroe County councilwoman who voted against the measure. “There’s a huge list of things to do in our county and the fair thing to do is put savings in the general budget.”

Hawk said she thinks energy efficiency should be a priority but not in a time of great economic hardship.

“It’s not that we oppose saving money and energy efficiency in government, but to say, ‘let’s save, save, save — and not put that money into the general fund where we need it,’ that’s the problem,” she said. 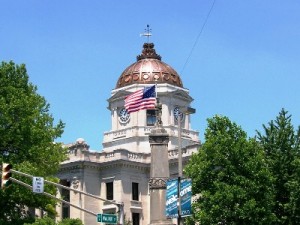 Better insulation for the courthouse is one of the many projects outlined in the county’s Community Energy Plan. Photo: Monroe County.

Cranor said even the budget-conscious should agree that the county cannot keep paying half a million dollars in electric costs each year, which continue to rise.

The plan projects hundreds of thousands of dollars in savings from the building actions alone — as long as people understand it can take several years from the start of each individual project.

Some of these actions are quick fixes. One calls for the installation of programmable thermostats that would scale back heating or cooling on weekends or nights when fewer people work.

The initial cost of that project is $7,250. The projected savings over seven years is $68,410, recouping the original cost in a little more than one month.

Not all the initiatives are easy or painless, but the efforts appear well supported in Monroe County, Cranor said.

“The state tends to think of us as little hippies down here, I suppose,” Cranor said. “But I think we’re smart. We’ve got an educated population, we care about the environment — our farmers market just had 12,000 visitors. Sustainability is already here and this community is well-equipped to embrace our initiatives.”

One thought on “Indiana county builds on identity of sustainable pioneers”