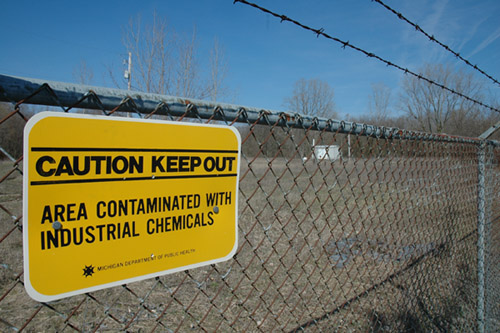 A sign at the Ionia City Landfill, one of the National Priority List sites in Ionia, Michigan. The landfill has been on the list since 1983 and was the site of a waste explosion in the mid-60s, which killed a waste hauler. The site was also used as a baseball facility in the 80s until exposed drums of chemicals were noticed and the field was torn down. Photo: Becky McKendry.

Nationwide, there are 1,320 final sites on the Environmental Protection Agency’s National Priority List of waste sites that have released or can release hazardous contaminants.

They are either awaiting or undergoing cleanup. Sites can be deleted from the list when “no further response is required to protect human health or the environment,” according to the EPA.

Each site is scored through the Hazard Ranking System on a scale from 0-100. The higher the score, the greater threat they represent. Scores are based on the likelihood of the site releasing dangerous substances, the amount and toxicity of pollutants and what the environment is like, such as how many people could be affected. However, scores do not wholly reflect the severity or priority of a site, according to the EPA.

Almost a third of these nationwide sites (426) are in the Great Lakes states of Michigan, Minnesota, New York, Pennsylvania, Wisconsin, Illinois, Indiana and Ohio.

The five sites with the highest scores in the Great Lakes region:

*Data was analyzed using information from the last EPA update of May 24, 2013.

One thought on “Data Watch: The Great Lakes’ top priorities”