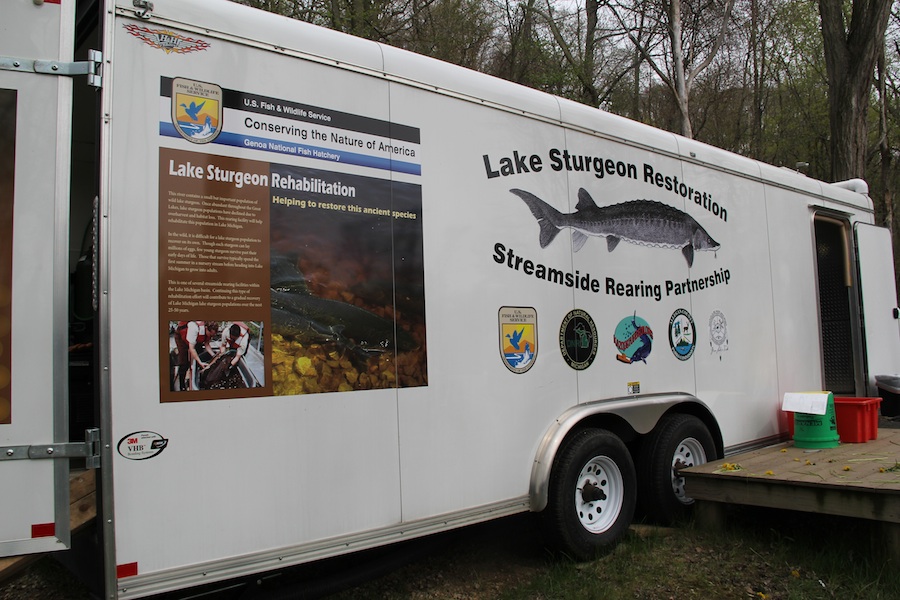 Back in the late 1800s, lake sturgeon were so abundant in the Great Lakes that they were piled up on shore to dry and be burned, fed to pigs, or dug into the earth as fertilizer just to get rid of them. These “living fossils” of fish evolution once ranged widely throughout the Mississippi River, the Great Lakes and the Hudson River.

Although killed for subsistence, lake sturgeon were an integral part of the culture of Native people, who utilized every piece of these fish that can live more than 70 years and grow to be more than six feet long.

Kregg Smith is a Fisheries Biologist with the Michigan DNR and Central Michigan University, and he’s also in charge of the rearing facility on the Kalamazoo River.

Kregg Smith: “Ecologically the sturgeon are important because they’re a bottom feeder so most of the energy in the form of aquatic insects and even with the invasion of zebra mussels, they help to reduce that biomass of that primary food source along the bottom. So they help to bring that energy from the bottom up into a large species of fish and up into the phelagic environment of the Great Lakes.” 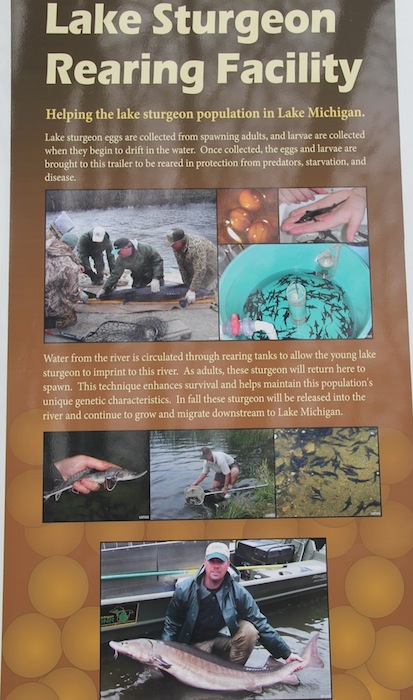 Kregg also told me that the sturgeon can serve as an indicator of ecosystem health and biodiversity, particularly because of its unique life history characteristics.

Nothing else looks like a sturgeon. They are the charismatic megafauna of Michigan’s fish world. They are our pinnacle species. They are the largest, the longest-lived, most unique-looking of our fish. But today, a glimpse of the sturgeon’s dark form in reedy shallows or near river mouths is as rare as it is startling.

The Lake Michigan region is in the center of the sturgeon’s historic range. Populations in and around the state were estimated to number in the hundreds of thousands at one time. However, sturgeon were considered a nuisance by commercial fishermen because they destroyed fishing gear that was set to target other species. This led to their widespread slaughter.

Since the mid-nineteenth century, exploitation and habitat degradation have resulted in a substantial decline in sturgeon populations. Only a remnant of the original lake sturgeon population remains in most Great Lakes areas today, including that of Lake Michigan.

Population numbers are believed to be at 1% of their former size.

The fish is listed as a threatened species by the  Michigan Department of Natural Resources and numerous management efforts are being undertaken to try to protect the fish and ultimately restore healthy sturgeon populations. 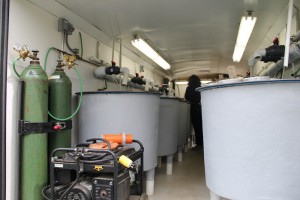 Inside the rearing facility, water has been pumped in from the Kalamazoo river. Eggs are collected from the river then hatched and reared in these facilities over a 6 month period. Photo: Mark Brooks

One of these initiatives is a streamside rearing program. There are five streamside rearing facilities operated by the Michigan Department of Natural Resources and today I’m visiting one of them at the Allegan County Park in New Richmond on the Kalamazoo River. The rearing facility looks like an ordinary trailer but inside, something extraordinary is taking place. Giant incubators, a maze of water tubes and pipes, buckets, petri dishes, refrigeration…all in the name of  raising young sturgeon with water pumped in from the adjacent Kalamazoo river. Lake sturgeon eggs are collected from spawning adults and larvae are collected when they begin to drift in the water. Once collected the eggs and larvae are brought to this trailer to be reared in protection from predators, starvation and disease.

Elliot Kittle is a young biologist with the US Fish and Wildlife Service who works in the rearing facility. He explained to me how the sturgeon rearing process works. 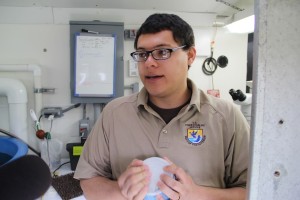 In the wild it’s difficult for a lake sturgeon population to recover on its own. Though each sturgeon can lay millions of eggs, few young sturgeon survive past their early days of life. Those that survive typically spend the first summer in a nursery stream before heading into Lake Michigan to grow into adults. Scientists hope that continuing this type of rehabilitation effort will contribute to a gradual recovery of Lake Michigan lake sturgeon populations over the next 25-50 years.

AW: “Why is anything important? They’ve been here for over 100 million years and it would be nice if they could hang around for a couple  more decades.”

MB: So if somebody asks you why are we putting so much effort into saving sturgeon and investing taxpayer dollars?

AW: “This is a $400,000 project but that’s less than one cruise missile so I figure it’s a pretty good investment.”

MB: Is there something to be gained for the public? 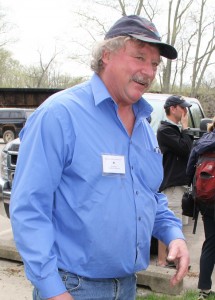 Sturgeon may never return to population levels of the 1800s and new threats to the species, such as climate change, are emerging. Pollution and habitat loss remain an ever-present threat and questions remain about why this prehistoric fish isn’t reproducing in the wild as much as scientists had expected. But thanks to the efforts of groups like Sturgeon for Tomorrow and initiatives such as the sturgeon streamside rearing program, rehabilitation efforts seem to be having a positive impact.

Recent sightings and scientific research indicate that natural reproduction is occurring and lake sturgeon in Lake Michigan and throughout the Great Lakes appear to be on a rebound.

Rearing sturgeon for stocking has proven to be difficult, uncertain and expensive, but it may be the only practical way to rebuild sturgeon populations. Given the challenges still facing this remarkable prehistoric species, only time will tell just how successful efforts to revive sturgeon populations will ultimately be.

This is Mark Brooks reporting for Great Lakes Echo.
Editors note: This story was also supported by the Institutes for Journalism and Natural Resources.

2 thoughts on “The challenges of sturgeon stewardship”