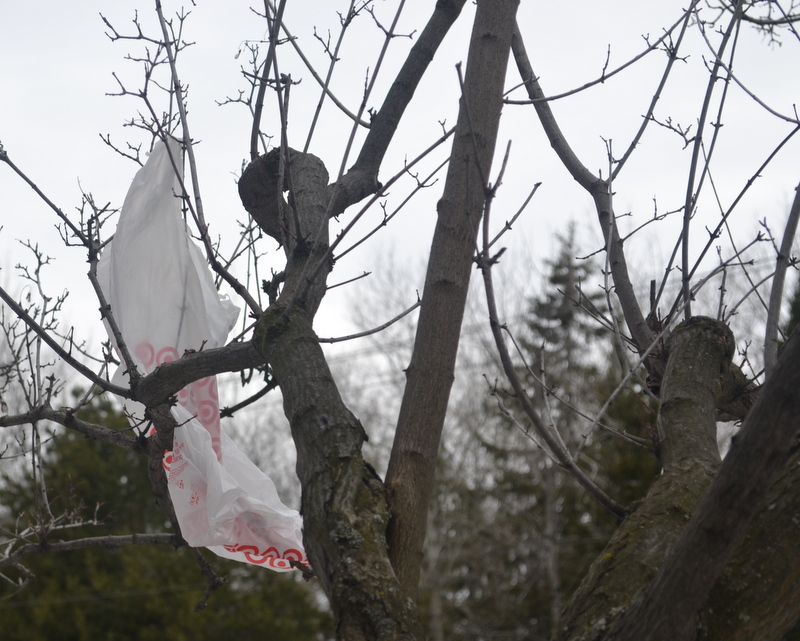 A plastic bag is caught in a tree on April 10. Shawna Mulleneardley started Bag It Duluth when finding out that plastic bags like this one never decompose, so even if it gets released from the tree, it will just find another tree, bush, waterway, or ditch to sit in. Photo: Jenae Peterson

Some cities have fees, and some have banned them all together. No city in Minnesota has yet to change the way they use plastic bags, but Duluth is trying.

“There’s a lot of patterns of behavior that we can impact,” said Emily Larson, a Duluth city councilor. She has teamed up with Shawna Mulleneardley and the group Bag It Duluth to try and change the way people think about using plastic bags.

“You don’t make change unless someone pushes it,” Larson said.

There is an expected 12 to 18 month process involved in starting the project, which, according to Larson, is still in its first stages.

The group has begun to generate some community interest. They have shown the documentary “Bag It” by Suzan Beraza to the public twice, and are thinking about showing it once more. Mulleneardley said the goal currently is to encourage average people, along with businesses, to get involved.

“Ideally, the best situation would be if people would make decisions on their own…and don’t walk around like zombies just taking bags,” said Mulleneardley, who moved to Duluth three years ago and got the opportunity to be a part of the AmeriCorps.

While helping to clean out streams, she noticed how many plastic bags were clogging the drainage pipes.

There are 42 named streams in Duluth, and more that have not been officially named. Mulleneardley said plastic bags never break down and get clogged in the drainage pipes and cause backflows.

“The fact that we have those streams and we live on the lake is two huge reasons people should care about this issue,” Mulleneardley said. “It’s really a part of our community, so people should take care of it.”

Mulleneardley said the group is still brainstorming ideas, including hosting a bag-free week challenge, an Earth Day or Earth Week event, creating a pledge that people could take and setting up a table at the University of Minnesota Duluth’s sustainability fair.

Although no city in Minnesota has yet to put in place laws regarding plastic bags, some stores have started the process on their own. The locally owned-Duluth grocery store, Whole-Foods Co-Op, is one example.

“We don’t distribute grocery plastic bags,” said Shannon Szymkowiak, the promotions and education manager at the Whole-Foods Co-Op. Although they don’t have a “written policy,” she said they do practice ways to get consumers out of the habit of using plastic bags. 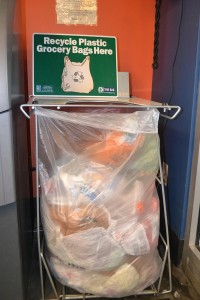 The recycling bin at Whole Foods Co-Op sits right in the entrance, next to the ATM machine. When it fills up, the Western Lake Superior Sanitary District comes to pick up the bags to recycle in other ways. Photo: Jenae Peterson

The Co-Op provides paper bags at the registers, but they offer a “piggy-bank policy,” where consumers get a punch card if they don’t take a bag, and each punch is worth five cents. Once they hit 20 punches, they get a dollar off their next purchase. If a consumer brings in their own reusable bag, they get a three-cent discount. They also have a recycling area for people who want to get rid of the plastic bags that always seem to add up.

After the business moved into the new store, they discussed the idea of offering plastic bags, but they decided to stick with what they had been doing all along and not use them.

“It just never seemed like a good idea,” Szymkowiak said. The Co-Op has not worked directly with Bag It Duluth, but they have also shown the movie “Bag It” to try to help educate the public.

“It has a chain effect that people don’t realize. You can make a difference with only the one little thing you change,” she said.

Szymkowiak said that it’s been easy to live without plastic bags —  she carries along reusable bags with her in her purse. “Once you stop using them, you realize it’s just one less thing you have to hassle with.

“When you work at a grocery store, you see so many people come and go, and so many plastic bags that are used,” Szymokowiak added. “When you think about it, if 100 people stopped using those bags, you don’t need to order as many, which means less transporting in the trucks, and less trees wasted. It’s a small act that can make a big difference.”

“We live in a community where people care about what’s going on,” Mulleneardley said.

When she initially had the idea to do something about the plastic bag waste, Mulleneardley thought she was alone. When she started looking into it, she was surprised to find that so many had already thought of this and done something about it.

Mulleneardley said there are a lot of people who realize that something needs to be done, but they don’t know how to start. It seems overwhelming to take on such a big issue all alone, she said. But now that Bag It Duluth is more prevalent, people are coming out of the woodwork to join the cause.

“I’m really excited about what people might do to make a change,” Mulleneardley said. “[I’m] excited to see what comes out of all our education.”