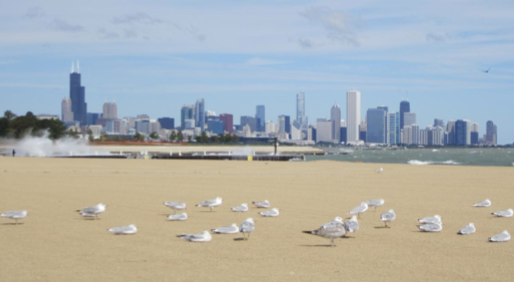 Researchers cut a population of pesky Chicago gulls almost in half by putting oil on their eggs.

The United States Department of Agriculture project was an attempt to control the population of ring-billed gulls on Lake Michigan beaches.

Gulls in Chicago have caused general nuisance, property damage and economic losses. Their excrement threatens the health of beachgoers.

Several studies showed a relationship between ring-billed gulls and increased levels of fecal indicator bacteria, such as E. coli, in the nearshore waters.

E.coli isn’t necessarily harmful, but some Chicago beaches were found to have unsafe levels, said Zvezdana Kubat, assistant press secretary for the district.

“When our beaches test above the standard set for all Great Lakes, we have to notify the public,” Kubat said.

While the gulls aren’t the only cause of beach bacteria, gull overpopulation has been a long-term problem.

The gull’s long life span  contributes to a large adult population, said John Hartmann, a wildlife specialist on the project.

Hartmann and other specialists oiled eggs during nesting season, hoping to reduce the amount of hatch-year ring-billed gulls.

“We actually use food grade corn oil and coat the eggs to inhibit the transmission of oxygen through the egg shell,” Hartmann said. “We do this in the first two weeks after the egg has been laid, before the embryo develops, effectively sterilizing it.”

Egg removal can cause the adult gulls to lay more eggs, but sterilization through egg oiling doesn’t trigger that response, said Hartmann.

The project began under the direction of the Chicago Park District in the spring of 2007 and continues now, as the gull’s nesting season is about to begin.

“Ring-billed gulls arrive in Chicago after winter, and in April they build nests,” Hartmann said. “We scout out the sites while they’re nesting, and in the middle of April they lay their eggs.”

Oiling the eggs has been successful in stabilizing the population without harming it, Hartmann said.

The project’s wildlife specialists followed recommendations from the U.S. Humane Society. The group says that egg management is not considered inhumane if performed in the first two weeks, before the gull embryo begins to develop.

According to the final report, the gull population was cut 46 percent between 2007 and 2012.

During the 2012 swim season the proportion of tests resulting in a swim advisory declined at 12 of 14 beaches, compared to data from 2006.

Kubat said that while such results are encouraging, gulls aren’t the only factor that leads to unclean water.

“We’re doing a number of things to manage bacteria on our beaches,” Kubat said. “Last year we implemented a predictive modeling system that takes things like wave height and air temperature into account.

“Regarding gulls, we’ve also seen success with canine management — we’ve got border collies chasing the birds away,” she said. “Reducing litter can also prevent attracting them. As always, we’re encouraging beachgoers to throw away their garbage and to stop feeding the gulls.”

6 thoughts on “How to beat the Chicago gulls? Don’t let them rebound”