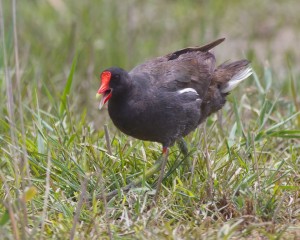 A threatened species in Michigan, the moorhen has just returned to Lake St. Clair Metropark after a decade-long disappearance. Photo: Mike Dee Photography.

The restoration of a southeast Michigan marsh has already returned rare plants and birds to a Lake St. Clair park.

On tap: Yet more work to divert stormwater and reduce beach closings at the Lake St. Clair Metropark.

Among the birds returning after a nearly decade-long hiatus is the common moorhen (Gallinula chloropus). A dark, duck-like bird with a flamboyant splash of red on its beak, the moorhen is threatened in Michigan.

“This park was always a good stronghold nesting area for moorhens, but over the last eight to 10 years, they declined so horribly that I didn’t even see adults, let alone a nest with babies,” said Julie Champion, eastern district interpretive manager for the Huron-Clinton Metroparks, which includes Lake St. Clair Metropark.

“This past year we had a pair of moorhens and they were calling,” Champion said. “We’re pretty sure that they were a nesting pair because we saw an immature.”

The secretive marsh birds called least bitterns (Ixobrychus exilis), which are threatened, and the songbirds called marsh wrens (Cistothorus palustris), which are species of special concern, are increasing. And other species, such as sora (Porzana carolina) and Virginia rails (Rallus limicola), are also coming back. 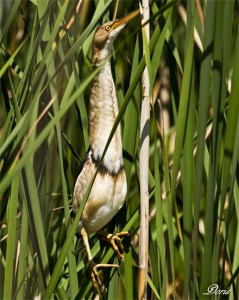 The least bittern is making a comeback following the removal of an invasive grass. Photo: Mike Dee Photography

invasive wetland grass Phragmites australis that had engulfed more than half of the park’s 500 acres of wetlands. The four-year, $178,000 project funded by the U.S. Fish and Wildife Service has reopened the marsh to the birds.

“We had sightings of adult moorhens in the north marsh directly in a spot where we got rid of the Phragmites,” Champion said.

The restoration is not just for the birds.

“When I first started with the metroparks 22 years ago and began walking our marshy nature trail, we’d see all the different plants that should be there: the water lilies, the arrowheads, the water plantain, the bur reed,” Champion said. “But then it became a wall of Phragmites.”

Now that the weed is gone, the scene is set for the native plants.  The seeds of many remain in the landscape, waiting for room to grow.

“We’re starting to see some of them return a little bit, because there’s still an existing seed bank there,” she said. “We’re beginning to get back some of that diversity of plants.”

The Phragmites removal is indeed a success story, said Anne Hokanson, Great Lakes coastal wetlands ecologist for the Michigan Department of Environmental Quality’s Water Resources Division, “It has done wonders for restoring the marsh out there. It’s really opened it up to native vegetation and to some of that original hydrology.” 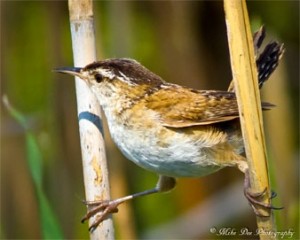 More is planned.  Water-control structures will be built to bring additional water into Point Rosa Marsh, a large wetland on the western end of the park.

A mat of non-native algae called Lyngbya wollei was removed to reestablish flowing water between Lake St. Clair and the Point Rosa Marsh, said Paul Muelle, chief of natural resources for the Huron Clinton Metroparks.   The work is supported by a $1.275 million grant from the federal Great Lakes Restoration Initiative.

More work will divert stormwater runoff from the park’s 40-acre, 4,000-space parking lot into the marsh. Storm water, ­often contaminated with feces and the associated bacteria E. coli from the hundreds of geese and seagulls that frequent the lot, pours into the Black Creek.

The creek flows into Lake St. Clair, just north of a swimming beach which is typically closed several times every summer due to high bacteria.

“The idea is that the stormwater gets completely eliminated from the Black Creek, and hopefully this will be one more piece of that puzzle that helps keep the beaches open,” Muelle said.

Construction begins this spring to replace about 12 acres of parking lot with vegetative swales and settling areas that will remove pollutants from the water. Ditches will be added to carry the now-cleaned water into the marsh. That work is supported by $1.5 million in grants from the federal Great Lakes Restoration Initiative.

“We’ll not only be removing all of that storm water from the Black Creek, but we’ll also be adding to the water in the marsh which really needs it,” Muelle said. “It’s kind of a two-for-one.” 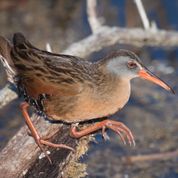 habitat and wildlife and cut  pollution.

In the 1940s, 1950s and 1960s many parks along the Great Lakes were developed with little thought of stormwater runoff, Muelle said. “You got rid of the water the fastest, quickest way possible, and that’s kind of what we had done here, too.”

With the changes at Lake St. Clair Metropark, other parks can visualize their own potential renovations.  “We’re hoping it will be a demonstration-type site, which is why we are so excited about it,” he said.

The work at the park also illustrates how marsh restoration work can have a broad impact, Hokanson said. “Because multiple layers of ecology are all connected, you’re going to have multiple benefits. For instance, Phragmites removal is focused on vegetation, but you’re also going to get benefits to amphibians and reptiles, birds, and fish.”

Statewide, marsh-restoration work varies by region and by the specific needs of each park, she said. Priorities include removing invasive species, rectifying the impacts of filling or diking on hydrology, reestablishing native plants, or installing habitat structures or fish-spawning areas.

“But there is much much more that is needed and could be done. It’s just a matter of funding, usually,” Hokanson said.

As the work progresses at Lake St. Clair Metropark, Champion is spreading word of its results with new signs, displays and programming in the park’s nature center and throughout the park.

“We’re educating the public about storm water, about wetlands, and about invasive species. It’s been great,” she said.

Perhaps the best educational tools are the returning plants and animals.

“I was just reading old bird-banding records from the early 1980s that showed black terns — some 80 nests — and we haven’t seen them at all in the marsh over the last decade, Champion said.

“They haven’t returned yet, but with water levels and the changes in the vegetation, that’s another one we’re hoping for. We’ll see what happens!”