The alarming spread of Asian carp since the 1970s is seen on this map created by the United States Geological Survey and National Wildlife Federation.

It shows the carp’s initial foothold in Arkansas, where they were introduced to filter pond water on fish farms, and its rapid growth across the U.S.

In 2011, the map indicates how close they are to invading the Great Lakes Basin. 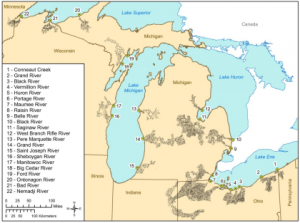 Echo reported that carp were found in Chicago waters in October, and were quickly removed by the Illinois Department of Natural Resources.

The climate, nutrient-range, and abundance of plankton found in the basin makes the Great Lakes an ideal habitat for the invasive Asian carp. Should the carp spread to the lakes, they’ll have no predators, and native species will be forced to compete for food sources.

The U.S. Geological Survey has identified 22 rivers in the U.S. portion of the Great Lakes that would provide suitable spawning habitat for Asian carp.