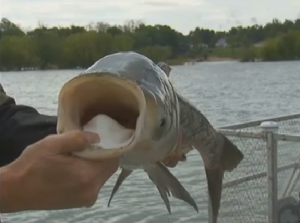 University of Minnesota researchers are recruiting common carp to test a way to eliminate Asian carp, according to WCCO-TV.

Fisheries experts fear that the invasive Asian carp may spread into the Great Lakes and elsewhere and outcompete native fish with its voracious appetite.

The researchers are fitting common carp, or “Judas fish,” with transmitters to lead them to other, larger schools of common carp, the station reports.

“(Carp) seem to be actually exceptionally social, they really hang out together,” researcher Peter Sorensen told the station. “We have to confirm that, but it sure looks that way.”

If the experiment shows how a common carp can “betray” other common carp locations, the same technique could be used in Asian carp populations to help exterminate them in the future, said Bill Hudson, the story’s reporter.

27 thoughts on “Judas test: Will carp betray their own?”