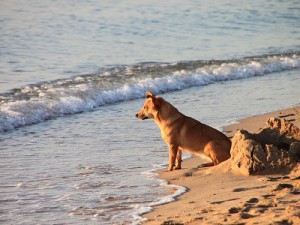 Not picking up your dog’s waste can lead to closed beaches. Photo: Public Domain Photos (flickr)

Environmentalists and public health experts want that new puppy to come with a lifetime supply of plastic bags, preferably biodegradable

According to the U.S. Environmental Protection Agency(EPA), the 78 million dogs in the United States create 10 million tons of feces annually, polluting waterways and posing a threat to public health.

Michigan has 3,288 miles of coast line, the second only to Alaska’s, and all those beaches are irresistible to dog owners.

“Pets can contribute fecal pollution to our waterways. This is mostly in the spring to fall when we are out enjoying the water with our pets,” said Joan Rose, the co-director of the Center for Water Sciences of Michigan State University.

According to a survey by EPA, 40 percent of dog owners do not pick up their pets’ waste at all and all that waste pollutes waterways. And two or three days worth of droppings from a population of about 100 dogs can contribute enough bacteria to temporarily close a bay and all watershed areas within 20 miles to swimming and shell fishing.

“These are bacteria and parasites that infect the intestinal tract of humans and animals and are excreted in our feces which are poops. These pathogens can be transmitted from animals to humans and from humans to animals by contaminated hands, surfaces, food and water. These include bacteria like salmonella, and parasites like cryptosporidium and giardia,” she said.

Shannon Briggs, toxicologist at the Department of Environmental Quality, said that people are doing a good job cleaning up after their dogs.

“Owners could prevent the pollution easily by being sure the dog has had its daily constitutional prior to the trip to the beach and by picking up after the dog. And many local communities are educating their residents how to take care of the problem,” she said.

Rose said people should really be aware that their health and their pet’s health are linked.

“Be sure to take any sick animal to the vet, especially young puppies that may be more prone to accidents and may also be more susceptible to being sick with diarrhea. Wash your hands and sanitize surfaces. Don’t drink untreated water and be careful about swimming at highly populated dog beaches,” she said.

Only a small portion of beaches in Michigan are pet-friendly and Rose said that pets can not contribute as large a percentage of pollution as industry and agriculture.