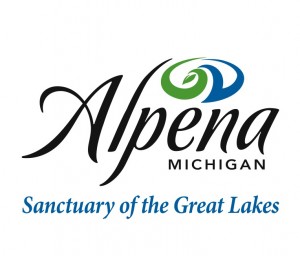 The new logo for Alpena sports the city’s new slogan, a reference to both the nearby Thunder Bay National Marine Sancutary and the city’s brand as a refuge from the stresses of life. Image courtesy Alpena Convention and Visitor’s Bureau.

The Lake Huron city of Alpena, Mich. has adopted a new slogan to promote the community as a place of peace and rejuvenation for visitors.

The slogan, “Sanctuary of the Great Lakes,” came out of an effort to develop a brand to attract more tourists, according to city officials. Alpena is home to the Thunder Bay National Marine Sanctuary, an underwater preserve sheltering an estimated 116 shipwrecks dating from the nineteenth century to the present.

“Thunder Bay National Marine Sanctuary is unique in the world,” said Deb Pardike, executive director of the Alpena Convention and Visitor’s Bureau. “We also believe Alpena is a sanctuary in other ways; it’s a haven from the stresses of life.”

The slogan helps take the city in a new direction, Pardike said. “The industrial age is over, and people are looking around and thinking, now what? A lot of towns like ours made their existence on industry, and that’s not here like it once was. We needed a plan for the future.”

The city asked 150 residents what made Alpena unique.

“The bottom line of any branding program is finding the one thing that makes you different from everybody else,” Pardike said. “The marine sanctuary was one of the things that most people brought up, and we came to realize that Alpena was a sanctuary in even more ways than that.”

“Branding is a promise,” Pardike said, “It represents what Alpena is now, and what Alpena has the potential to be. When we started the branding process, we wanted to help change our city from being a good destination into a great one.”

2 thoughts on “Alpena, Mich. “Sanctuary of the Great Lakes””