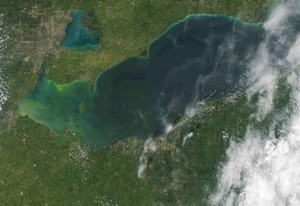 Canadian officials Tuesday announced a $16 million investment to understand and control algae in the Great Lakes.

The Great Lakes Nutrient Initiative will focus on Lake Erie which is particularly vulnerable to toxic and nuisance algae. That’s a lot of money to address excessive phosphorus discharges from farming and sewers.

To get a sense of the challenge, last week the Columbus Dispatch reported  if 80 percent of the phosphorus that drains into Ohio’s Grand Lake were cut, it still would take 20 to 40 years to clear the water.

In 2010, a liver toxin associated with algae was so concentrated in Grand Lake St. Marys that the state warned people not to touch the water, the paper reports. Last year a record bloom of algae on Lake Erie stretched from Toledo to Cleveland.

One thought on “Algae fighters get $16 million boost”